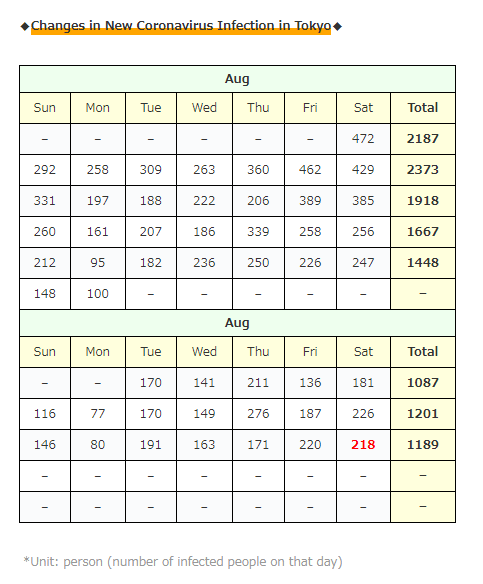 218 ( -2 from the day before) new infections confirmed in Tokyo.

The number of newly infected people in Tokyo was 218 today, and I thought, “Wow, there are many …”, but looking at the usual calendar like follows, it was less than last week, so I was a little relieved!

And since today is Saturday, the cumulative number of infected people for one week has been calculated, but this week’s cumulative total was [1189] people! 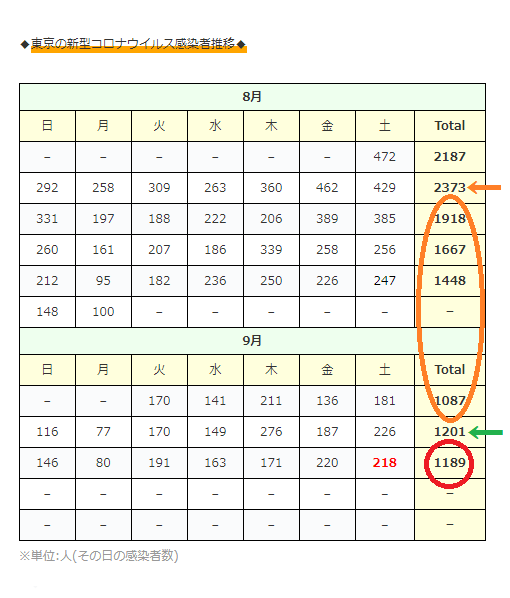 It was gradually decreasing from the orange arrow ←,

but it increased at the green arrow ← (cumulative last week),

and I was worried about what would happen this week, but I’m glad it somehow decreased …

I hope it will be reduced by one week next week …

・ It seems that nosocomial infections at hospitals in Ome City do not stop also today … Infection of 4 health care workers was confirmed today, and the number of selectors has increased to 42…

→Men and Woman from 5 countries [5] persons

So I felt that it was faster to make a table than to pick up each news, so I did my best to make it!

It’s out of the standard!

And the number of tests is overwhelmingly large in the UK for the population, and the cumulative number of infected people is literally different from digits in the United States, India, and Brazil …

Next, I would like to introduce the daily increase and decrease in the number of infected people by bar graph for each country.

By the way, this time I just want you to see the “shape of the graph”, so please look at the shape somehow with a feeling like “Oh, It’s controlling once, and expanding again…”

First of all, this is of Japan… 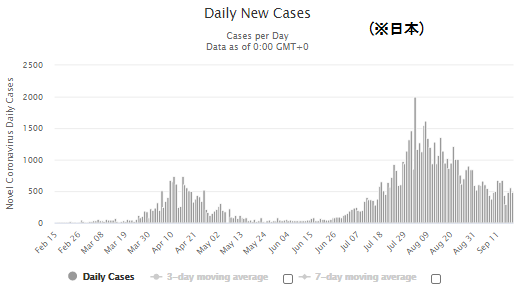 As you all know, the infection spread once in April, was controlled in May and June, and then spread again from July …! 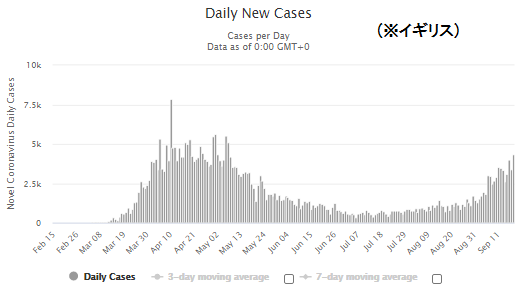 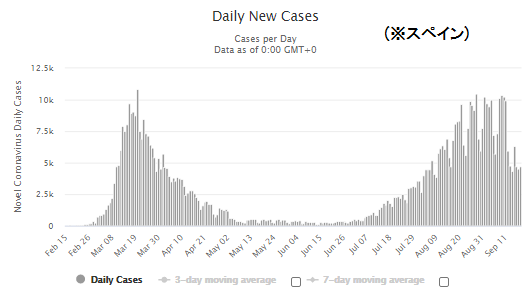 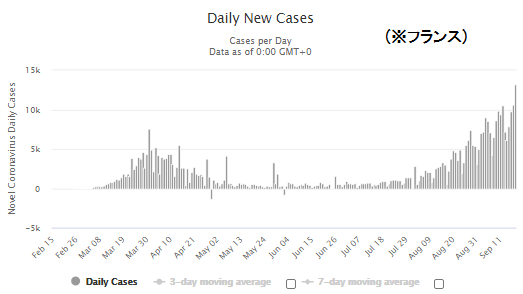 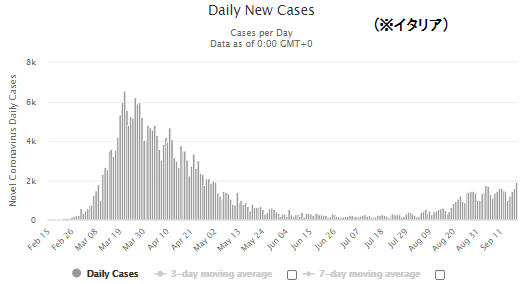 There are big and small “mountain shapes”, but there are roughly two mountains!

The only scary thing is … Unlike the shape of the Japanese graph,

Next is Southeast Asia!

Recently, many infections have been confirmed in “Quarantine at the airport”, so I checked it! 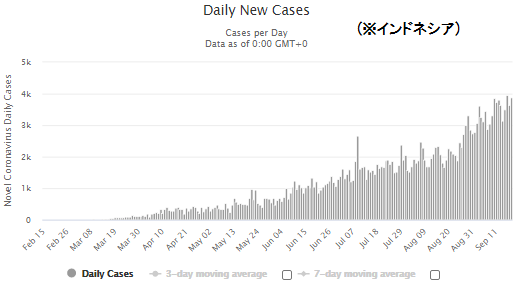 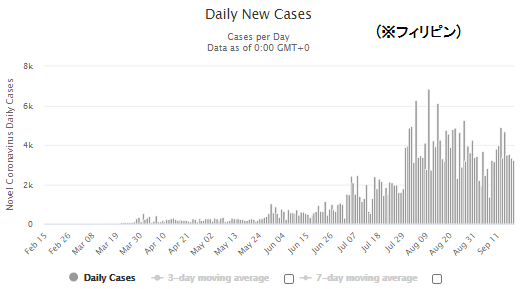 As far as the shape of the mountain is seen, Southeast Asia

It seems that it is gradually increasing …

And after all, the mountain on the right side (→) is in a shape that can not be said whether it is around the peak now or the peak has not come yet. .. 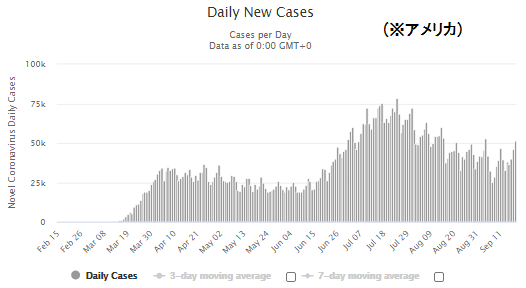 The shape is different from any country, and it seems to be “The situation has been increasing for a long time.” …

And if you look at the right end (→), it’s scary that it’s increasing again …

Today I introduced the data for the first time in a while!

Fortunately, Japan is starting to decline, so we have to keep an eye on this and take control, right?

Now, next is the usual topic! (lol)

At an elementary school in Sagamihara City, an “online athletic meet” was held at the initiative of a student! 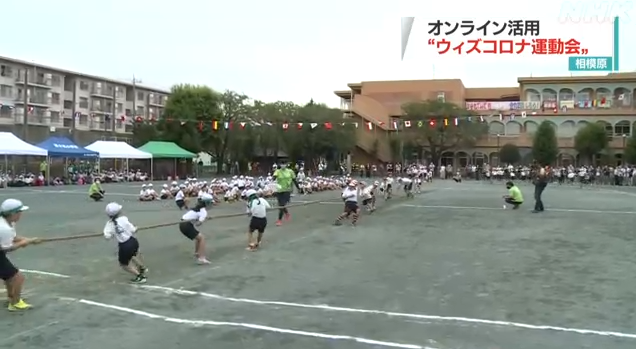 It seems that the teacher thought about canceling, but the students thought about specific methods, and as a result, they decided to hold an athletic meet.

・Narrow down the children and parents who can watch the game to two grades each.

It seems that measures have been taken!

By the way, it’s already the autumn athletic meet season …

I hope the children of today will have many memorable events …

And the story changed suddenly, here

Regarding this content, the articles on each news site state that the following matters were discussed at the expert meeting of the Ministry of Health, Labor and Welfare!

“About COVID-19, as a general rule, infected people under the age of 65 who have a low risk of becoming seriously ill should be thoroughly treated at home or at accommodation.”

(* It is also written that “even if they are young patients, there is a risk of serious illness, so they have to respond flexibly” …)

I just had a character that I was interested in…

“Notification of patients suspected of being infected due to fever, etc. to prefectures is limited to those who need hospitalization.”

Well then, from now on,

Will the number of people counted for “new coronavirus infection” decrease significantly? Do you decide that you are no longer a new coronavirus patient unless you are hospitalized ?? “

So I checked it out!

・Currently, it is necessary to notify the health center when the doctor determines that there is a suspicion of infection.

・When an influenza epidemic occurs, it is difficult to determine whether it is influenza or a new coronavirus infection unless it is tested.

・Therefore, the notification was limited to those who were so bad that they were hospitalized at the time of the test.

・Reports of people who test positive will continue to be counted.

No … I’m a little distrustful of the government … No, nothing (laughs)

I was just a little worried! lol

Only a few people, but it has increased for the first time in weeks …

By the way, today was the first day of the 4 consecutive holidays!

How are you all doing?

It’s raining just after the holidays, but it’s getting cooler! 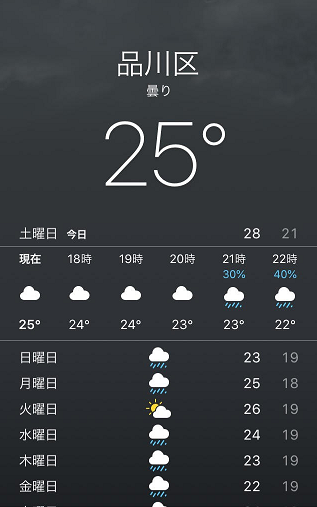 It’s a changeable autumn weather, and I hope there are some days when you can go out to play with your family or hang out with your friends!

“No, shouldn’t I go out to prevent infection …”