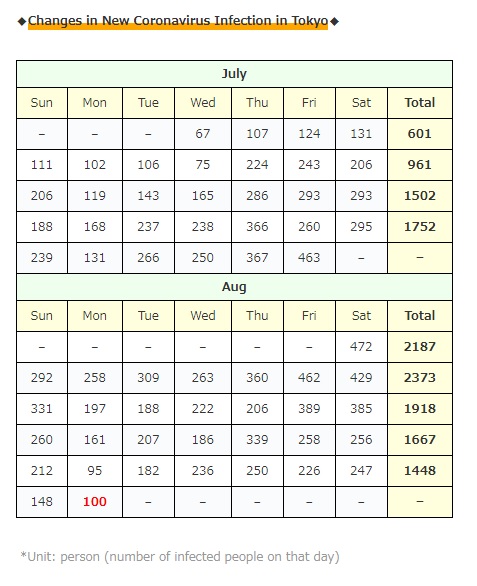 The number of new infections in Tokyo was not double digits this Monday, but it was just 100 people!

I had the image for Sunday that “Sunday with a small number of infected people”, but in August it had never cut below 200 people, so I feel like “Finally!”

・Infection in the facility [3] people

・As for infection at home, there are two cases in which a 0-year-old infant was infected by a father or mother…

→US military base：[1] people

・It’s unknown which base have infected people today.

There was additional news about this, which I always post.
I’m sorry for always putting it…

*A period extension has been decided on August 27 ↓

↑And about this, it will be extended

In addition, it is said that it will be canceled in the Tama area and the island in 31 days, and only restaurants in 23 wards will be exetended.

OK, I understand that government want them to get home by the end of the last train. .. lol

Governor Koike says the reason is “the number of new infections is decreasing but still large”.

That’s true… There are still more than 200 people…

It is said that the company that responds to the request will receive a cooperation fee of 150,000 yen.

Financial resources may be tough, but I want the government to compensate properly.

This time, I would like COVID-19 to converge, so I wanted the gomernment to be the amount that everyone is convinced and will cooperate…

And in the article, the manager of an izakaya in Shinjuku said,

“It’s very tough to manage. If you want to extend only 23 wards, please explain the effect of shortening it properly.”

I think that both companies and sole proprietors are economically limited, so we really want to work together to get rid of the new coronavirus from Japan and the world.

By the way, at the izakaya in Shinjuku, sales are down by 2 hours and overall sales will drop by 30%,  so this month’s sales are down 80% compared to last year. ..

↑ Sorry for being long!

I will write another article as soon as possible.

From the Ministry of Health, Labor and Welfare, about when children are wearing the masks for measures of “new coronavirus (COVID-19) infection”, they seem to call for masks for children who are under 2 years old to be prevented from wearing them because of the increased risk of choking and heat stroke.

“When wearing a mask, parents and other adults should pay attention to their physical condition and do not need to force them when they are in poor condition.”

“Especially for children under the age of 2 it is difficult to remove the mask by themselves.”

In May-June, pediatric societies and groups are also calling for people to stop wearing under 2 years old.

I think it’s obvious that “adults should look carefully”, but I wonder if there were some accidents…? because they call for such things…

Of course, it’s true that there are many things I can’t take off on my own, and I sometimes see small children masking me so much that I still can’t speak well, so it’s certainly something I really worry about…

WHO also said that it is not necessary to wear under 5 years old in August this month.

I can’t trust about WHO…

After all, WHO used to say, “No mask is needed to prevent new coronaviruses” on early 2020…

However, it seems that the Japanese pediatrician teacher is saying that, and it seems dangerous, so please be careful. ..

And today I have another article…

In July, the number of domestic hotel/ryokan guests decreased by 56% compared to the same month last year. ..

Mitigation of self-restraint of crossing prefectures from June 19

“Go To Travel Campaign” from July 22

As a result, it seems that it has improved by 12% from 68.9% in June, but it seems that the tourism industry is still in hardship…

According to the article,

they managed to make some efforts, such as closing some floors to cut costs and using employment adjustment subsidies to leave employees on disaster vacation.

For Tokyo, what is the status of hotels near Shinjuku, Shibuya, and near Tokyo Station?
As far as I’ve heard from some hotels, the room occupancy rate is still 10% to 20%.

I’m sorry that I always put it on…

And the information about vaccines and remedies that I always put…

The other day, on August 29th, “Japan’s Vaccine Negotiation Status” was in the news, and I knew how much could be secured now, and when the vaccine would actually be supplied to Japan, so I revised it all up!

Since this is the information that can fundamentally solve this “new coronavirus (COVID-19) infectious disease”,

so If you have time, please read it!

When will the vaccine arrive in Japan?! [COVID-19]
*** This article is written with the help of Google Translate... *** Hello! Thank you for your inter...

The world’s fastest vaccine will be completed in September!

It’s nice that the information about vaccines, the number of new infections in Tokyo, and the total number of infections nationwide have calmed down a little lately!

However, if we are careless, the infection may spread again, so