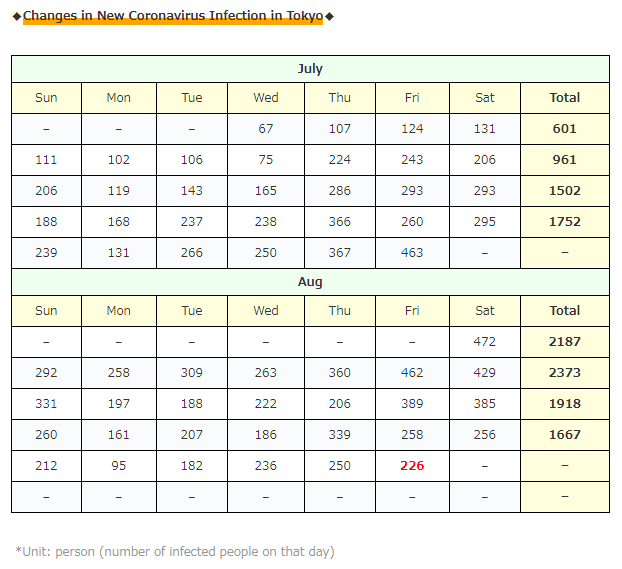 The number of new infections in Tokyo was in the lower 200 range today!

It seems like “it’s really starting to decrease” because the number of new infections today was 200 level in spite of Friday when the big number is easy to come out in the week.

…No, we must be vigilant.

・Infection in the facility [8] people

→Men and Women from The United States and Korea etc, [6] people

（*Recently, I don’t know why but there are no information on any website…）

→Mass infection of restaurants in the prefecture, where infection of 5 people was confirmed on 27th [1 person]

*Male in his 70s living in Souka City

”The location and name of the store cannot be clearly disclosed.”

*In addition, it seems that there are outbreaks of about 5 people at day services in Atsugi City, day care facilities in Yokohama City, kindergarten in Kawasaki City and hospitals in Kawasaki City.

*During the summer vacation, He was participating in club activities.

*The club are about 70 people, in addition, there was an external practice game, so we are investigating rich contacts

*Male employee in his 30s in Chiba City

→There is no information today…but, it is said that 9 deaths were confirmed today…

・It’s unknown which base have infected people today.

Both of them of below, ↓

*Male employee in his 30s in Chiba City

→There is no information today…but, it is said that 9 deaths were confirmed today…

This is pretty scary. ..

Whether it’s Chiba or Osaka, they tell us that the new coronavirus infection is still a scary disease…

There was additional news about this, which I always post.
I’m sorry for always putting it…

*A period extension has been decided on August 27 ↓

↑And about this, it will be extended

In addition, it is said that it will be canceled in the Tama area and the island in 31 days, and only restaurants in 23 wards will be exetended.

OK, I understand that government want them to get home by the end of the last train. .. lol

Governor Koike says the reason is “the number of new infections is decreasing but still large”.

That’s true… There are still more than 200 people…

It is said that the company that responds to the request will receive a cooperation fee of 150,000 yen.

Financial resources may be tough, but I want the government to compensate properly.

This time, I would like COVID-19 to converge, so I wanted the gomernment to be the amount that everyone is convinced and will cooperate…

And in the article, the manager of an izakaya in Shinjuku said,

“It’s very tough to manage. If you want to extend only 23 wards, please explain the effect of shortening it properly.”

I think that both companies and sole proprietors are economically limited, so we really want to work together to get rid of the new coronavirus from Japan and the world.

By the way, at the izakaya in Shinjuku, sales are down by 2 hours and overall sales will drop by 30%,  so this month’s sales are down 80% compared to last year. ..

↑ Sorry for being long!

I will write another article as soon as possible.

Today I was writing another article. Since I could only make a Japanese version, I will make an English version early…

Regarding Tokyo, there was such news today!

It seems that the first meeting of the team was held to study the structural reform of the society and the politics of the city in anticipation of the end of the “new coronavirus” desease!

The content is about digitization and remote work, such as online procedures…

But first of all…

So it’s good to think about after COVID-19 disaster,

but first let’s think about making it completely controlled! (Angry)

I want to say that…

Because it is important to think about the above things early, but I don’t think that the measures are taken so far for the new Corona. .. ..

And in terms of the new Corona I was interested in, this is not a news article but a net reaction, but about a man who died in Chiba on August 26…,

Some people died in their thirties. ..

By the way, this person had a chronic diabetes. ..

Let’s all be really careful…

To change the subject,

This is the article about the vaccines and remedies that I always post!

The article is here ↓

↑The content is really hopeful, and there are many people who do not know it yet, so please read it by all means!

In the first place, the vaccine may be approved in a month or two! ?

Then, this “COVID-19 desease” will be over at once!

*By the way, it seems that Anges Co., Ltd., which is leading the vaccine development in Japan, has successfully completed the first and second clinical trials…

However, the commentator said, “I’m hoping for Japanese vaccine…”

But when it comes to the news, we (like me who is the general public) probably think that “I don’t care what country the vaccine is, so I want to take the fastest and safest vaccine early.”

The number of people receiving medical treatment is decreasing by 300 to 400 every day!

Today was more full of news about Prime Minister Abe’s resignation than the news about COVID-19.

Because I can understand the pain of illness, so thank you very much for your hard work, but as at the company, I don’t know if things will get better or worse as the prime minister, president and boss change. ..

There may be some people who think that Prime Minister Abe will not do anything about new coronavirus infectious diseases, but the next Prime Minister will may start doing strange things.

It’s pretty scary that the boss will change…

I hope that the new coronavirus infectious disease will be heading towards the end even if the prime minister changes. .. ..