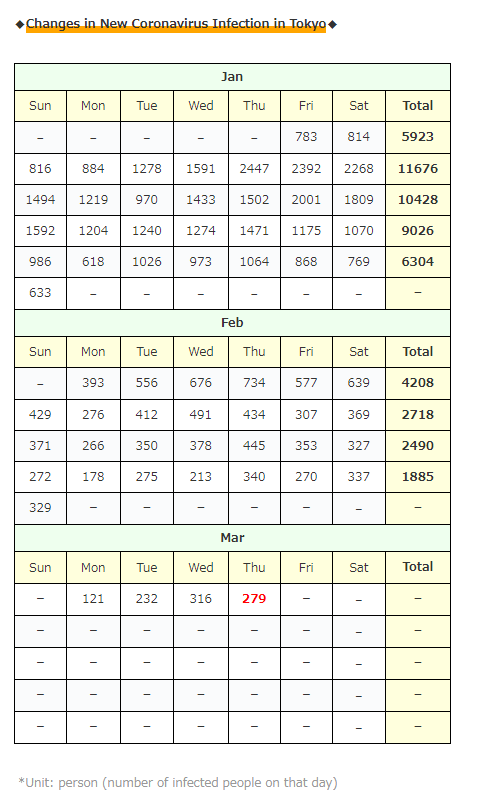 279 ( -37from the day before) new infections confirmed in Tokyo.

The number of newly infected people in Tokyo does not rise from the previous week for two consecutive days, so it is safe for the time being, but it is still high … 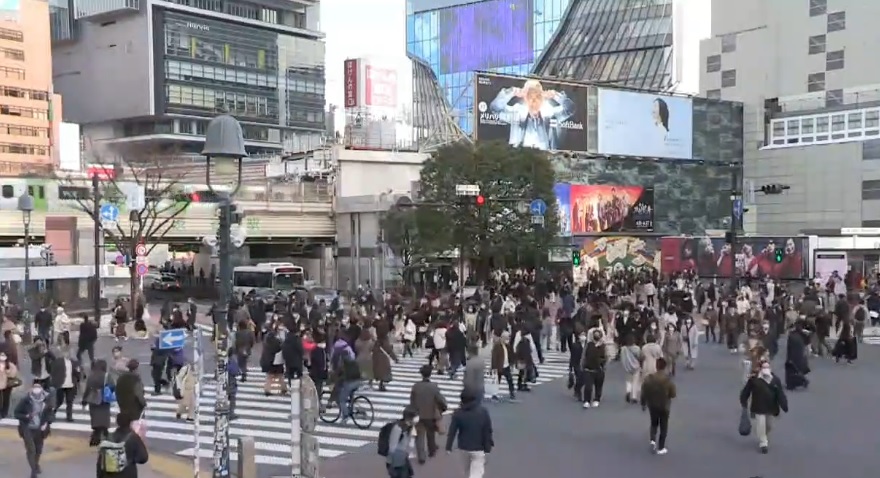 ・Infection in the facility [42] people

* It seems that a new cluster has occurred at a medical institution in Soeda Town.
(*details unknown) 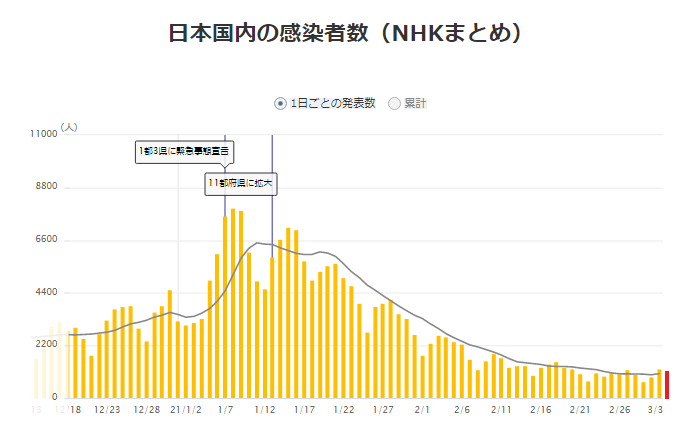 It seems that the Tokyo Olympics may be held without accepting overseas spectators (tourists) …!

t seems that multiple parties have revealed, and the final decision will be made after discussions with the International Olympic Committee (IOC) …

Good news for athletes who are working hard towards the Olympics …

However, it seems that it will cause great economic damage, including the tourism industry …

It’s a unavoidable situation, but …

And one new vaccine has been added to the world’s vaccinations!

The rumored “vaccine that can be inoculated only once”, a vaccine from Johnson & Johnson in the United States!

It seems that permission for emergency use has been issued in the United States, and vaccination has already started from March 1st this month!

It’s great that we only need one vaccination!

It would be great if this would accelerate the world’s vaccination!

However, the number of newly infected people seems to be increasing worldwide …

Until then (until the end of February), it had been decreasing for 6 consecutive weeks, so it’s the same flow as in Tokyo (Kanto?) …

After all, does that mean

“The spread of (global) infection during the New Year holidays has just subsided.”
＝
“Just returned to normal mode”

By the way, such “Kanto 4 areas where there is a high possibility that the state of emergency will be extended because the infection does not stop” …

The governors of the three Tokai regions (Aichi, Gifu, and Mie) have called on the citizens of the prefecture to refrain from unnecessary and unurgent movement to the four Kanto regions and areas with a large number of infected people …!

Let me say something as a Tokyo citizen …

“The answer is correct!” (Self-massion)

By the way, there was a reaction from people in the city about the extension of the state of emergency, but the result is as follows.

21-year-old college student in Tokyo
“To be honest, I have a feeling that “will it extend again?!”, but there is no way to extend it.”
“I want to believe that if I put up with it for another two weeks, the number of infected people will decrease.”

24-year-old man in Saitama prefecture
“I don’t think the number of infected people is increasing so much.”
“It has a big economic impact, and I see stores that are closed even in Shibuya, so I want them to cancel the state of emergency as soon as possible.”
“Extension of about 2 weeks is not very effective”

A 22-year-old female university student living in Tokyo
“Now there are quite a few people out in the city, and even if the emergency declaration is extended, their behavior doesn’t change.”
“A little stronger measures are needed”
“It’s inconvenient because various shops close at 8 pm”
“I feel that it is not very effective to put up with only restaurants, so there may be a slightly different way.”

Another female college student in Tokyo
“Since there are so many people outside in the city, I don’t know if extending it is really effective.”

Instead of picking up the “voice of the city” like this, I would like to do a questionnaire to a large number of people who go to the city on the actual, and see the result!

What will be the result?

It was a little talked about that Governor Maruyama of Shimane Prefecture criticized Governor Koike of Tokyo!

“Governor Koike should apologize to the citizens of Tokyo before asking the government to extend the emergency declaration.”

What we ask the Governor of Tokyo is not the loose measures that we have used up until now, but the one point that we want her

Rather than prolonging our self-restraint life, I want to get rid of the virus from the area in a short period of time and play freely!