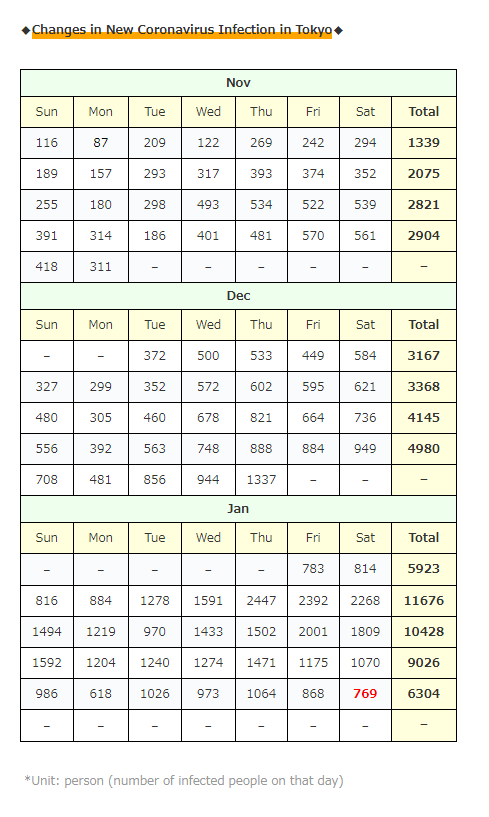 It’s strange because the tendency so far has been “the number of infected people announced increase from Wednesday to Saturday” …!

The really mysterious decline will continue for the past week or two…!

And today is Saturday, so I calculated the total number of newly infected people in Tokyo for this week…, but 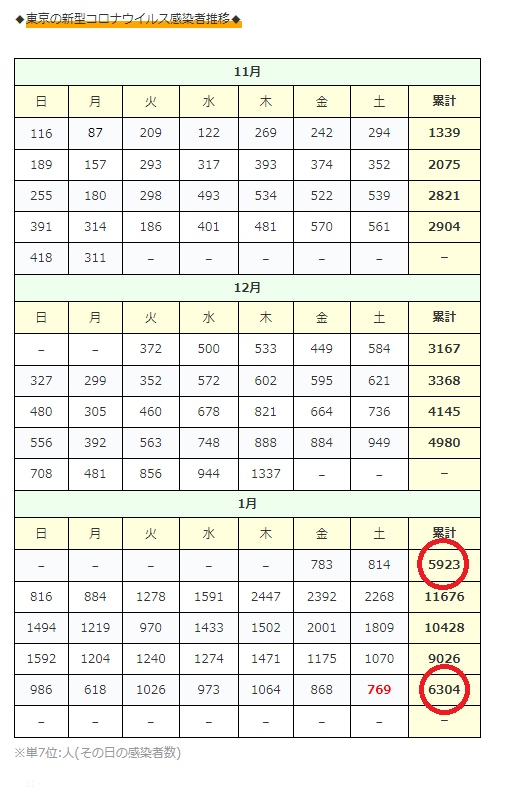 This number has finally returned to around the year-end and New Year holidays …!

It’s finally ”back to the starting point”.

“It just returned to the starting point” = From now on, it will be kept at this high value or not,

“Continuing to decrease as the downward trend continues”,

We must pay attention to the changes from here.

I hope it’s not the above… 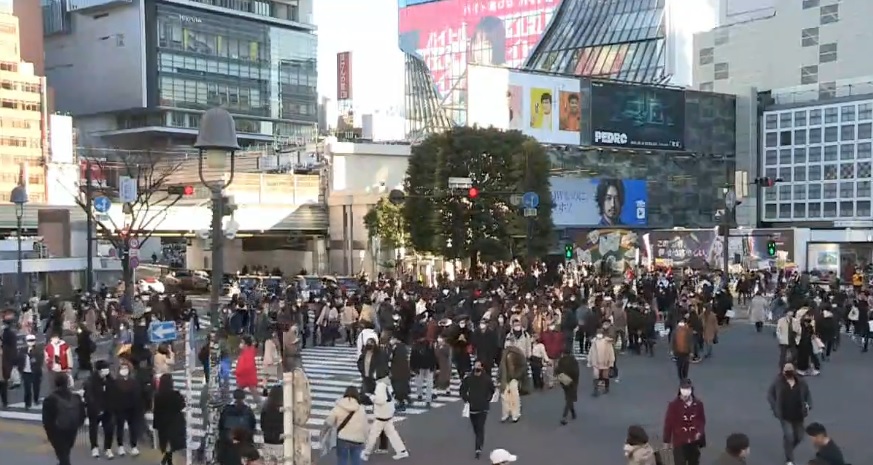 It’s too many people !

・Infection in the facility [113] people

* Infection in the facility [113] people

* The news was late last night, but it seems that a woman in her 50s who has never stayed abroad in Tokyo was infected with a mutant in the United Kingdom …
(contact with a man in his 50s)
Well … it’s more natural to think that mutants are already widespread in Tokyo …

・Day service facility in the western part of the prefecture

* Details have not been clarified, but it seems that four new clusters have been occurred, including the following …
・ Saisei Hospital in Hanamigawa Ward, Chiba City
・ Ichikawa City Hospital “Gyotokujin Clinic”
・ Urayasu City’s facility for the elderly “Koyu Day Service” 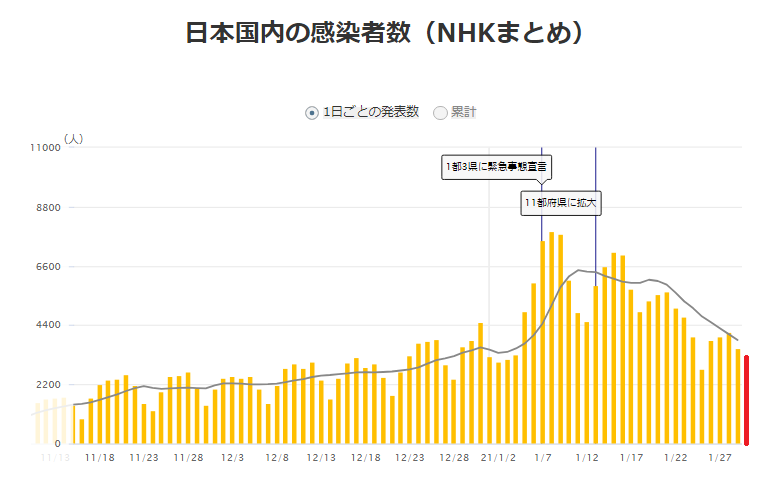 Japan is in the midst of a state of emergency, but in USA, it seems that the restaurant business, which was restricted in Los Angeles, USA, has resumed (albeit only outdoors)!

The reason seems to be that “the number of newly infected people on the day with the highest number in December was 60,000, but recently it has been around 20,000“!

The number has decreased, but it’s still 20,000 … As expected, the scale is completely different from Japan …!

(And the population of Los Angeles is about 4 million …)

It seems that there are so many infected people overseas, not by country but by state …!

By the way, the current infection situation in the United States is … 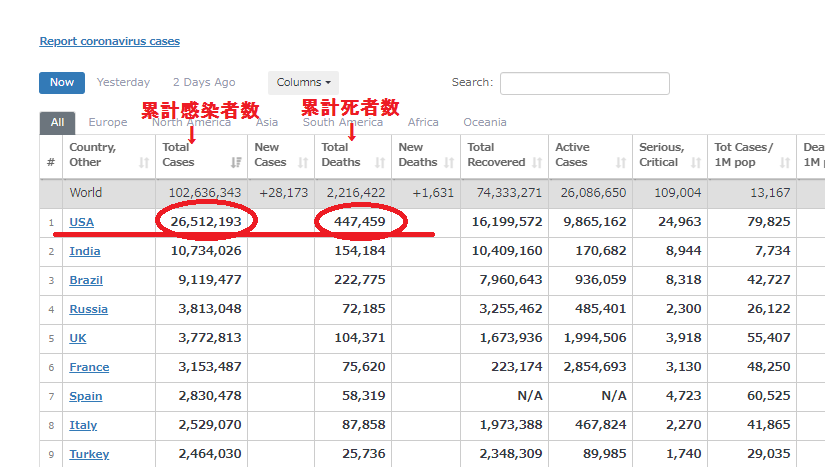 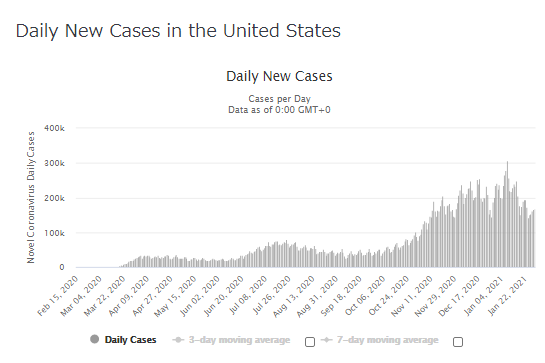 ↑ The number of newly infected people is still very large …

And since there was some information related to vaccines, I will briefly introduce it!

In the world, like AstraZeneca Pfizer Moderna, vaccines for new coronavirus infection (COVID-19) are being completed and vaccination is starting, but this time the interim results of the vaccine being developed by Johnson & Johnson (J & J) of the United States have come out!

Vaccines such as Pfizer, which have already been vaccinated, are about 90% effective, so we may think “66% …it’s low …”!

(Rather, vaccines such as Pfizer are too amazing lol)

By the way, the good thing about this J & J vaccine is that “the other vaccines are given twice, but this vaccine only needs to be given once”!

And the AstraZeneca vaccine was finally approved in Europe (EU)!

Ah, I envy them toooooooooo much! Lol

And there was a movement in vaccines in Japan!

Pfizer’s clinical trial data (required for approval) was submitted to the Ministry of Health, Labor and Welfare yesterday, January 29!

The government urged Pfizer to submit what was supposed to be submitted in February next month, so it was made in January this month!

Will this confirm the approval and start of inoculation next month?!

Thank you Pfizer! I love you! Lol

Well, the topic goes back to Japan …

In Nagoya, there were not enough beds and it was difficult to find a hospital, so it seems that two patients who took an hour from the emergency request to the hospital transportation died …

It’s unclear if this patient was infected with COVID-19, but in any case it’s a medical collapse …

Meanwhile, the Ministry of Health, Labor and Welfare decided that…

“Why did NHK publish the content of the August notice now (yesterday)?”

I think as above, but

By the way, yesterday January 29th in Tokyo is below.

There are too many home recuperations, and the hotel is almost unused.

(The government has secured a room for about 5,000 people, but only about 500 people are using it.)

In this situation, the government is just wasting the rent secured at the accommodation facility, isn’t it?

I wish I could increase the number of doctors at the accommodation facility and make the infected people obliged to receive medical treatment there. .. ..

The situation was progressing before I knew it! Lol

The WHO (World Health Organization) research team to clarify the source of the new coronavirus (COVID-19) has started a full-scale investigation yesterday, January 29, after the two-week quarantine period!!

I don’t want this situation to happen again, so I want them to investigate it thoroughly. .. .. .. !!

First of all, what kind of survey results will be released … Let’s expect!