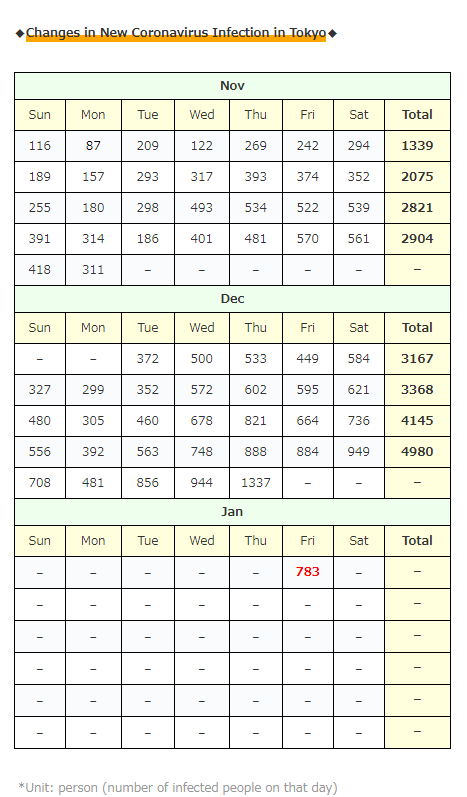 Has the number of newly infected people in Tokyo returned to normal (still high but…(dry laugh) )?

Yesterday was abnormal with 1337 newly infected people, so I told you yesterday like this … ↓

① When will the medical institution be closed for the year-end and New Year holidays?

② How many temporary laboratories (for PCR test) are open?

③ How many people are working to summarize the report the number of newly infected people?

④ How much is the impact of the holidays?

We cannot know the above, so we can’t say anything anymore …

・Infection in the facility [N/A] people

* Maybe it was New Year’s Day, but it was a day when the details of the route were not announced …

* Bringing in samples from outside of Tokyo [41 cases]

・Noda Life Care Center, a facility for the elderly in Noda City

* I don’t know why, but according to the article, “Kashiwa City and Chiba City did not announce, so the number of infected people in the entire prefecture is unknown.”

*In addition to the above count, They tested because an infection of a discharged patient was discovered.

*Among the infected people counted today, there are [5] cluster relationships, including the above.. (Add up to 2 people)

*Among the infected people counted today, there are [4] cluster relationships, including the above.. (Add up to 1 people)

*In addition, new clusters have occurred at nursing homes and companies in Hiroshima City. (details unknown)

*Among the infected people counted today, there are [5] cluster relationships, including the above.. (Add up to 1 people)

First of all, from the state of Shibuya in New Year’s Eve yesterday …

Every year, Omisoka is a scrambled intersection in Shibuya, Tokyo, which is a festive event, but this year there was a lot of news that “New Year’s Eve is quieter than usual”!

I thought (or rather, I thought it would be such a trend), so I saved a screenshot of the Shibuya Scramble crossing after 23:00 on “Omisoka”‘sDecember 31st, but it looks like this … ↓ 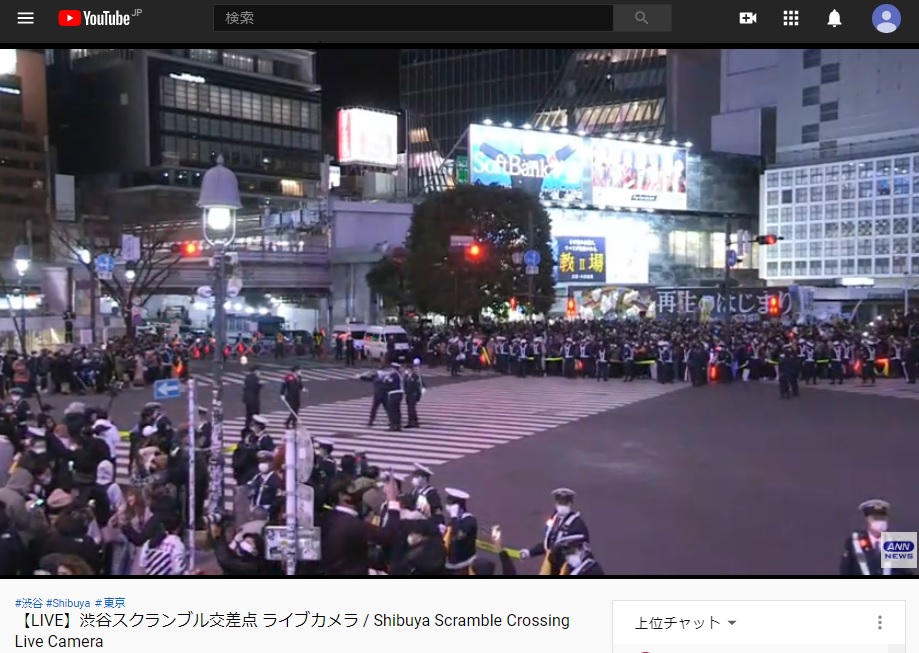 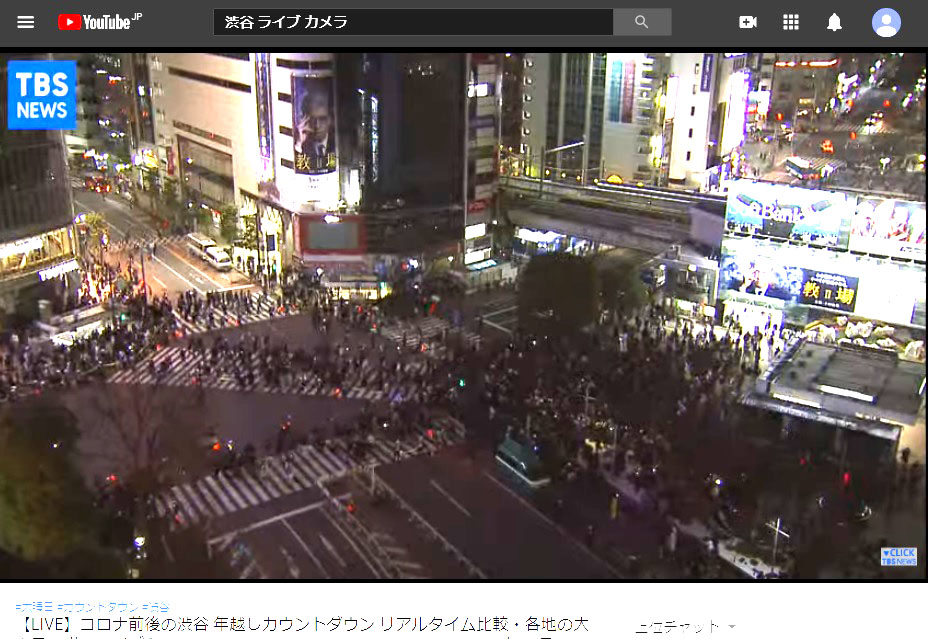 Yeah, there are many…!

And it was like this around New Year’s moment ↓ 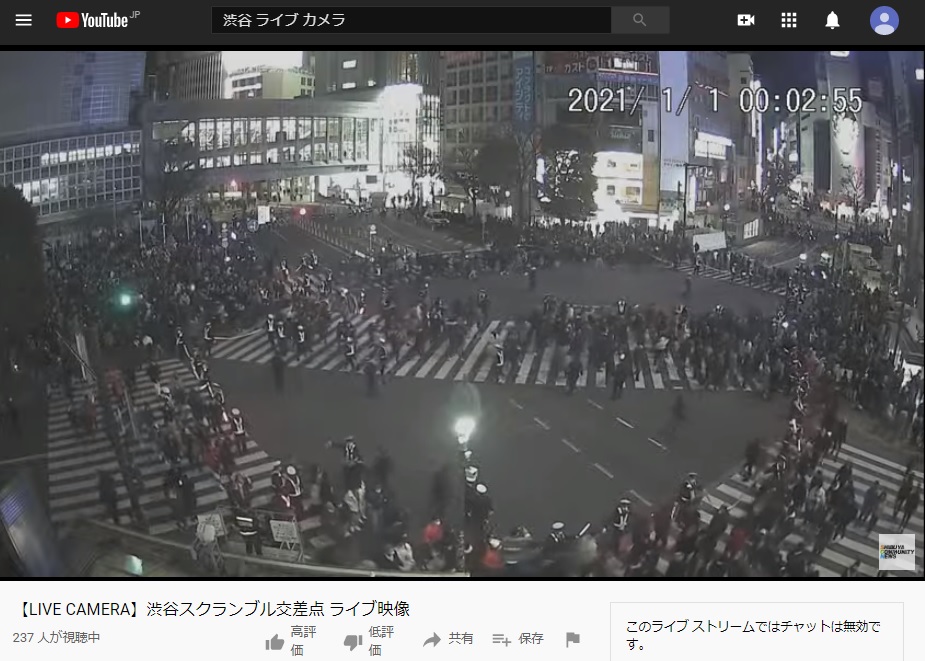 Every year is just too abnormal (every year it overflows so much that people can’t walk, and the countdown voice can be heard in the surrounding concrete buildings …) This year, despite this situation, it’s still abnormal when people are gathering. ..

And recently, the topic of the scariest British mutants is that the spread of infection does not seem to stop even though strong lockdown is still ongoing in the UK …!

The number of newly infected people in the UK on December 31 is said to be the highest ever, about 56,000 …! 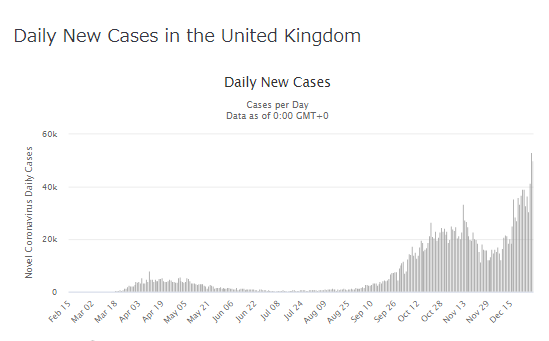 The number of newly infected people in Tokyo suddenly increased by more than 300 from the previous day (even though it was over 900 even the day before) and recorded 1337 ... but I hope that it is not the effect of this mutant…

By the way, there was also an article like this about it!

It seems that the spread of the infection has not stopped so much that the Tokyo Metropolitan Government is considering requesting the government to issue a state of emergency!

They seem to be clinging to the government, even though they haven’t done so much.

By the way, such a government …

It seems that the Act on Special Measures for Countermeasures against New Influenza (Acts such as Requests for Leave of absence and Declaration of Emergency) will be revised in two stages!

Two steps are welcome if it means to revise what you need first in order to proceed speedily in a limited time!

Finally, let’s take a quick look at the data that is circulating in the streets! 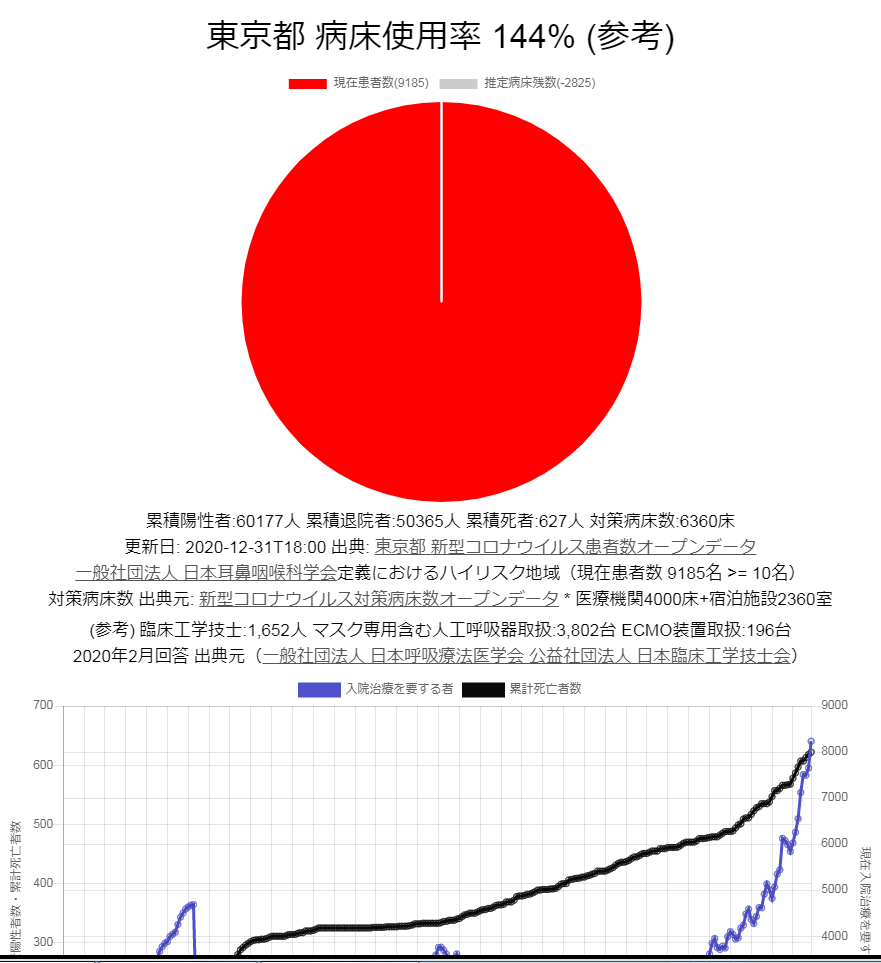 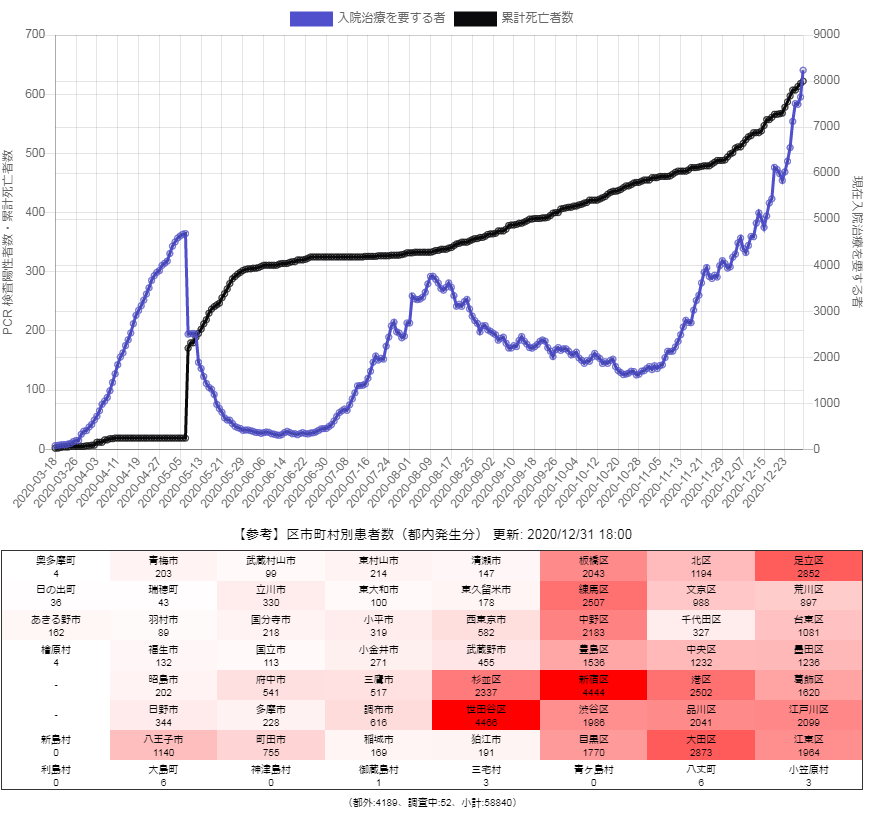 Let’s think about it! 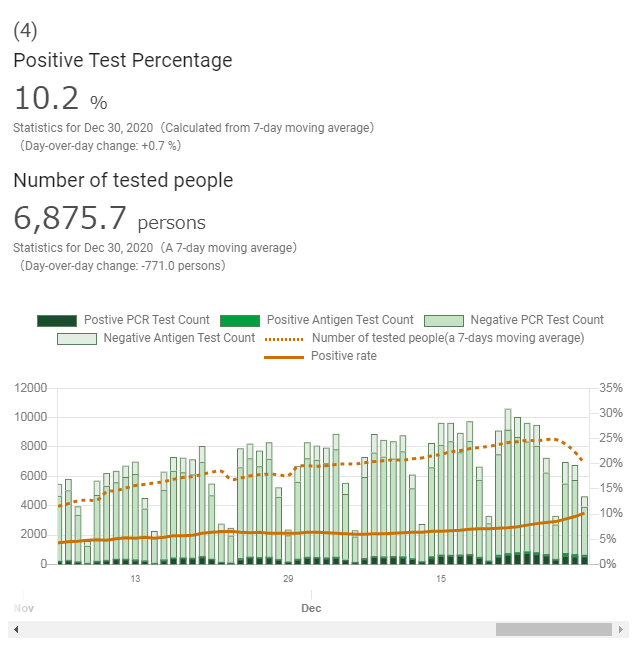 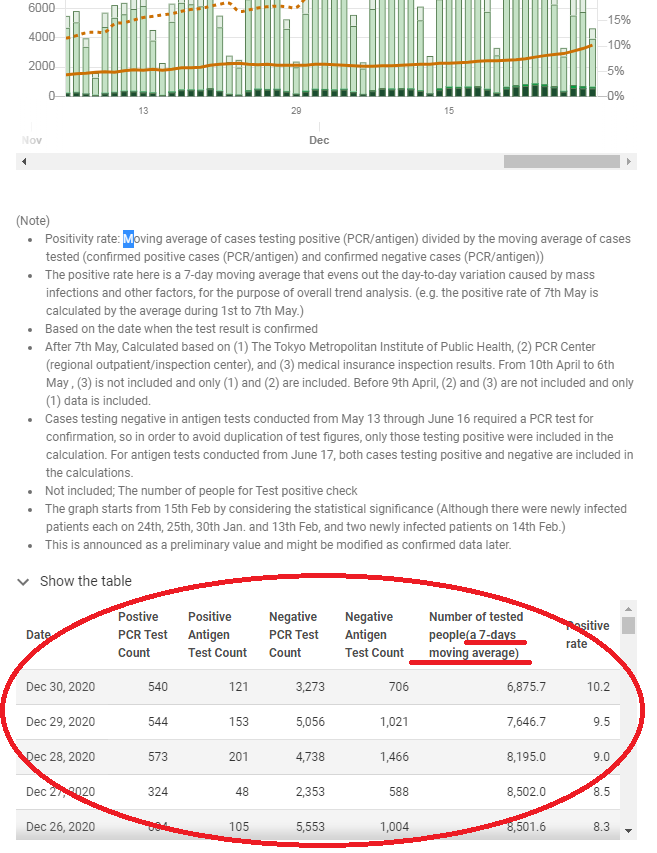 However, this does not seem to reflect the infection situation accurately, because the following can be considered.

・Although the announced “number of newly infected persons” is “the number reported per day“, the “number of tests is the average for one week“.

(Because positive rate = number of positive people ÷ number of tests)

②The number of newly infected people is often delayed by 3 days or more, and may vary considerably depending on the workload of hospitals and health centers.

I said difficult (lol) but…

①The dotted line in the graph (weekly average of the number of tests) has dropped extremely, so the positive rate seems to rise!

(Since the hospital was closed, the number of tests has decreased in the last few days, but a large number of test results have come out before that)

②Staff “I want to relax on New Year’s Day, so let’s write a report that I have collected on the 31st!”

That is also possible…

What is important is not the “number” of the positive rate, but the “accurate infection status” in the current city.

I want numbers that accurately reflect the current situation. ..

And about “Tokyo bed usage rate 144%”, when I calculate it from the materials of the Ministry of Health, Labor and Welfare …

②Number of rooms in accommodation facilities in Tokyo

③Number of inpatients on December 31st in Tokyo

④Number of critically ill patients on December 31 in Tokyo

⑤Number of residents of accommodation facilities on December 31st in Tokyo

So the actual bed usage is probably as follows

①+② is the total number of beds

③+④＋⑤ is the number of people using Total beds

it will be true!

Assuming that ⑥ says, “Everyone doesn’t like home care!”

In any case, the medical care provision system is tight, and there is only a future in which the number of home care recipients will increase dramatically…

“Being scared properly” is a good thing (I want the people of Shibuya yesterday to be a little scared too lol), but the article cut out only one side of the number and make an excessive noise saying “See, it’s such a difficult situation!” I think it’s strange, so I thought about it carefully and told it!

Let’s share information with everyone and defeat the new coronavirus this year!

I look forward to working with you again this year!