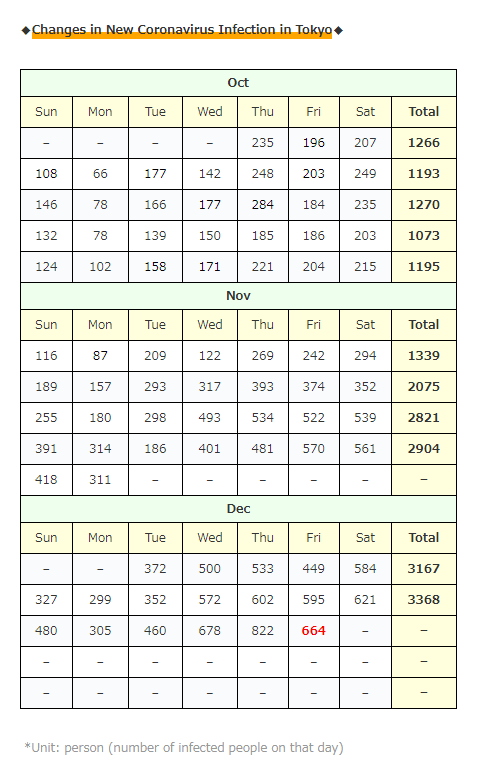 ・Infection at a dinner with friends and acquaintances [23] people

*There are [5] cluster relationships (Add up to 1 people)

*Among the infected people counted today, there are [3] cluster relationships, including the above. (Add up to 3 people)

*Among the infected people counted today, there are [13] cluster relationships, including the above. (Add up to 3 people) 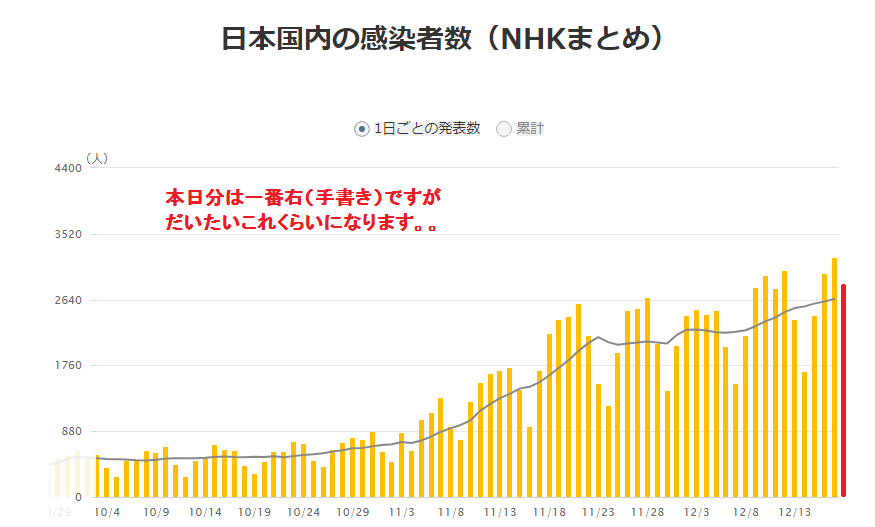 There was tremendous news today from waking up in the morning!

Pfizer’s new coronavirus (COVID-19) vaccine, which has already been inoculated in the United Kingdom and the United States, seems to be submitted for approval in Japan today! !! !!

“Is vaccination starting within the year in Japan ?!” … I was excited and then look at the content of the article … “There is a possibility that vaccination will start as early as next March” …

As expected, it is Japan quality. ..

The same is true for “Abigan” ↓

(From the summary article on December 16th)

Of course safety is important, but Japan really doesn’t have a sense of speed …

We’re waiting for more details, just because the breaking news came out first!

After that, a little additional information came out! 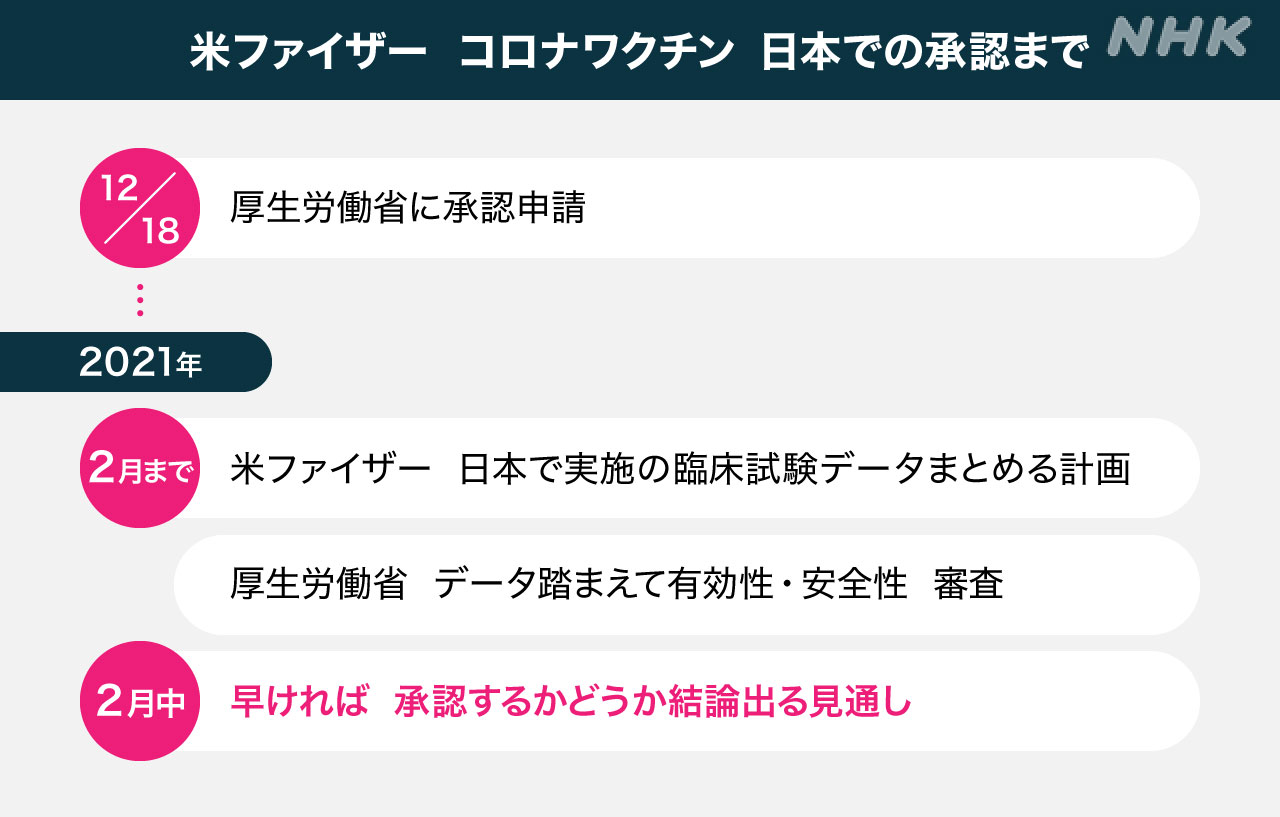 Pfizer’s new coronavirus (COVID-19) vaccine has begun to be vaccinated in Saudi Arabia!

The number of countries that have started vaccination will increase steadily!

Under such circumstances, it seems that terrible things are happening in Europe …

And there are also articles that interest me …

A research group at Kobe University studied the blood of about 10,000 outpatients at a hospital in the southern part of Hyogo prefecture between August and October …

Neutralizing antibodies were found in 0.15% of people (16 people)!

This means that as of October 1, 6000 people were infected when converted to the population of southern Hyogo prefecture …

And … the actual number of infected people in Hyogo prefecture as of October 1st is 2,700 …

I don’t know if “about 10,000” is a statistically valid number of tests, but it’s pretty scary because it means “There may be more than double the number of infected people announced.” …

I want them to do this in Tokyo!! lol

Terrible numbers will come out …!

And finally, since there was no additional information, I will post the measures taken by the Tokyo government, which I summarized yesterday.

→Raised to the highest level of the 4 alert levels

”There is no choice but to reduce the number of patients”

”I want people with mild or asymptomatic symptoms to consider the risk of infecting other people.”

* She does not seem to be very interested in the total number of infected people.

It seems that the “extremely strong sense of crisis” was expressed again.

”I want to contact the governor of Tokyo Koike.”

”Issue a special  COVID-19 warning for the year-end and New Year holidays!”

”Experts pointed out the possibility of exceeding 1000 people in the near future.”

①Spend only with the people you always meet

②Do not meet people after a long absence

③Do not hold a year-end party or a new year party.

④Avoid returning Parent’s home as much as possible

⑤If you go Parent’s home, do not eat out for two weeks.

”The situation clearly deteriorated in the important 3 weeks”

”Should you have stopped Go To at that time?”

”You should acknowledge defeat / failure!”

(*In Japan, it is ridiculed that “Governor Koike, Minister Nishimura, and other politicians do not take any realistic measures by mouth alone.”)

That’s all for the summary …

Opposition … The important thing is not to “stop Go To” …

However, both Minister Nishimura and Governor Koike have failed for three weeks and have not yet taken measures, so I am too worried about the future infection situation in Japan …

Let’s share information with everyone and be careful about infection prevention and manage to overcome this predicament!

NHK, which is super talented in terms of providing easy-to-read data, made something nice again!

The prefectures where the current “request for shortening business hours” are being made look like this! 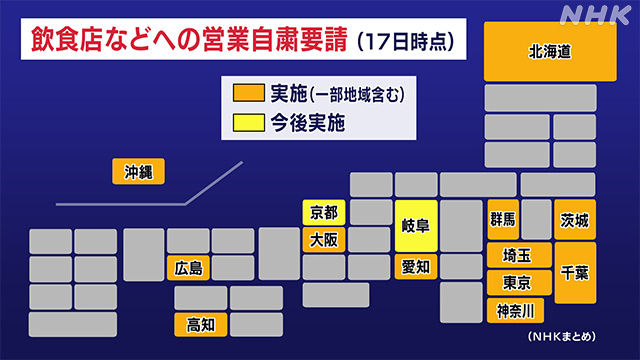 It may be more in the future … but I think “all prefectures in Kanto region will do it for the time being …” … but?!

Only Tochigi seems to have no problem! lol

Anyway, I can’t help but think, “They have failed for the important three weeks, but will they take such same measures which had already failed again …?”

(In most prefectures that requested shortening of business hours during the “important 3 weeks”, the number of infected people increased.)