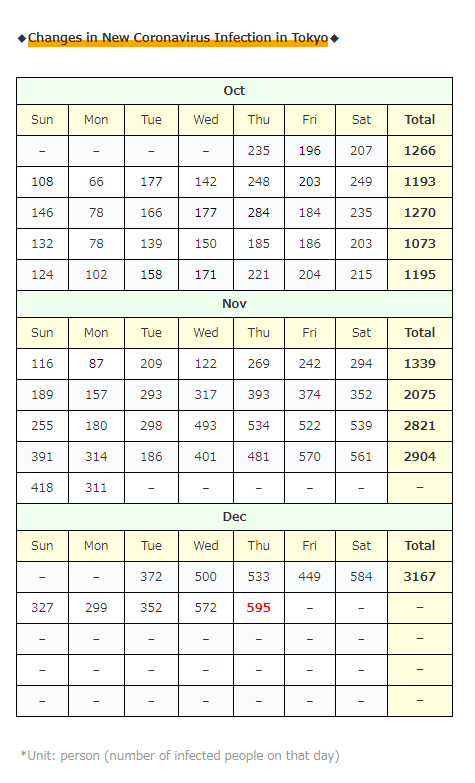 595 ( -7 from the day before) new infections confirmed in Tokyo.

The number of new infections in Tokyo has remained high since around Wednesday, the highest number ever …

It’s as if the body temperature never drops below 40 ° C….

・Infection at a dinner with friends and acquaintances [25] people

・utbreak of “Doai Memorial Home”, a welfare facility for the elderly in Sumida Ward [5] person(s)

Adjusting for “hospitalization or hotel or home treatment” ： 808 ( +7)

* Of today, 14 are women’s volleyball clubs.

*Among the infected people counted today, there are [6] cluster relationships, including the above.

・Infection status of “Gion Kobu”, one of the flower districts (entertainment district) of Kyoto (today)

*Infection of 4 people including geisha

・Nosocomial infection at a hospital in Shizukuishi-cho [21] person(s) 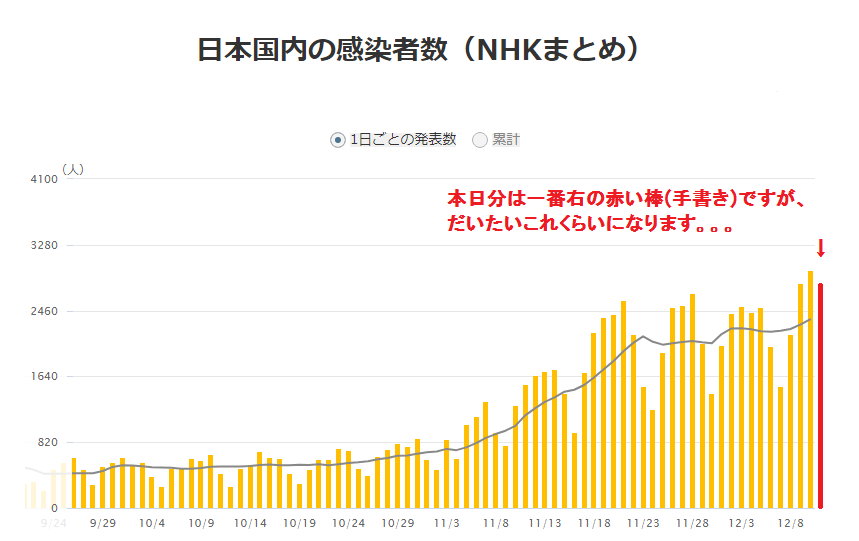 From such a surprising article today …

“Airport quarantine” currently requires foreign returnees and immigrants not to use public transportation even if they are “negative”, but the Ministry of Land, Infrastructure, Transport and Tourism seems to accept using railroads this month …!

The following seems to be decided as risk management … but…

・Different routes for getting on and off with other passengers

“Arranging a car for hire, etc. is a financial burden for those who enter or return to Japan,”

They come and go abroad for their own convenience, so it’s okay to leave it at your own expense, right?

From the day before yesterday, I was actually thinking, “In the United States, the vaccine application should be approved on the 10th, but there is no news at all …”, but it finally became news!

The US FDA (Food and Drug Administration) has concluded at Pfizer’s vaccine committee that “the benefits of vaccination outweigh the risks”!

“On scientific grounds, the benefits of vaccination of people over the age of 16 outweigh the risks.”

“Risk” seems to include allergic reactions from Pfizer’s vaccination in the UK the other day!

It seems that preparations for this Pfizer vaccine are already underway in various parts of the United States!

The state of New York seems to receive 170,000 doses of the first vaccine, and the general public will be able to get it from February!

Besides, there is also a contract with AstraZeneca?!

It seems to be from April to June next year,

By the way, this “Moderna Vaccine” is likely to be urgently approved on December 17th, a week later …!

When a website surveyed doctors in their 30s and over, about 40% said they didn’t want to get vaccinated …!

The reason was … “Insufficient evidence such as safety”.

However, by the time Japan becomes able to vaccinate, it seems that vaccination is progressing all over the world and sufficient evidence has been gathered!

By the way, about inoculation in Japan …

Ministry of Health, Labor and Welfare

(* If you are assigned to another area alone, you can inoculate in another municipality.)

① The “coupon” required for vaccination will be delivered to your home based on your resident card.

② Make a reservation by phone

③ Bring a “coupon” to a public hall or gymnasium prepared by a medical institution or municipality.

④ You can get vaccination for free

It seems that people with underlying illnesses and the elderly are prioritized during this “coupon distribution”!

It’s a nice way to wait for mail (reservation TEL, lol) because you don’t have to contend! lol

… Oops, I was imagining that I could get vaccinated for a moment and tripped to the world in my head! ｌol

The government is calling on prefectures to test during the New Year holidays!

This is really important because the number of tests will be extremely reduced during the holidays!

In Osaka Prefecture, the bed usage rate for the new coronavirus (COVID-19) severely ill is as high as 72.8% …!

The limit is near…

There was a government subcommittee on measures against new coronavirus infection (COVID-19) yesterday!

In response to that, I think that “proposals to the government” will be made today …

・Measures for the year-end and New Year holidays

・Countermeasures in the current situation of infection spread

(To avoid a state of emergency)

Etc. seemed to have been discussed,

And from now on,

It seems to be this flow.

Today too, the number has increased by more than 500 …

The monitoring conference in Tokyo was also held yesterday!

“We have done what we need to do, so we are waiting for the number of patients to decrease soon.”

“We haven’t had a major bankruptcy yet, so we want to maintain this system and keep an eye on it.”

The Japanese people are frustrated that the government and Tokyo do nothing, but are they taking very nice measures without our knowledge …?

And even if the number of newly infected people in Tokyo is 500 or 600, they are just “maintaining this system” … 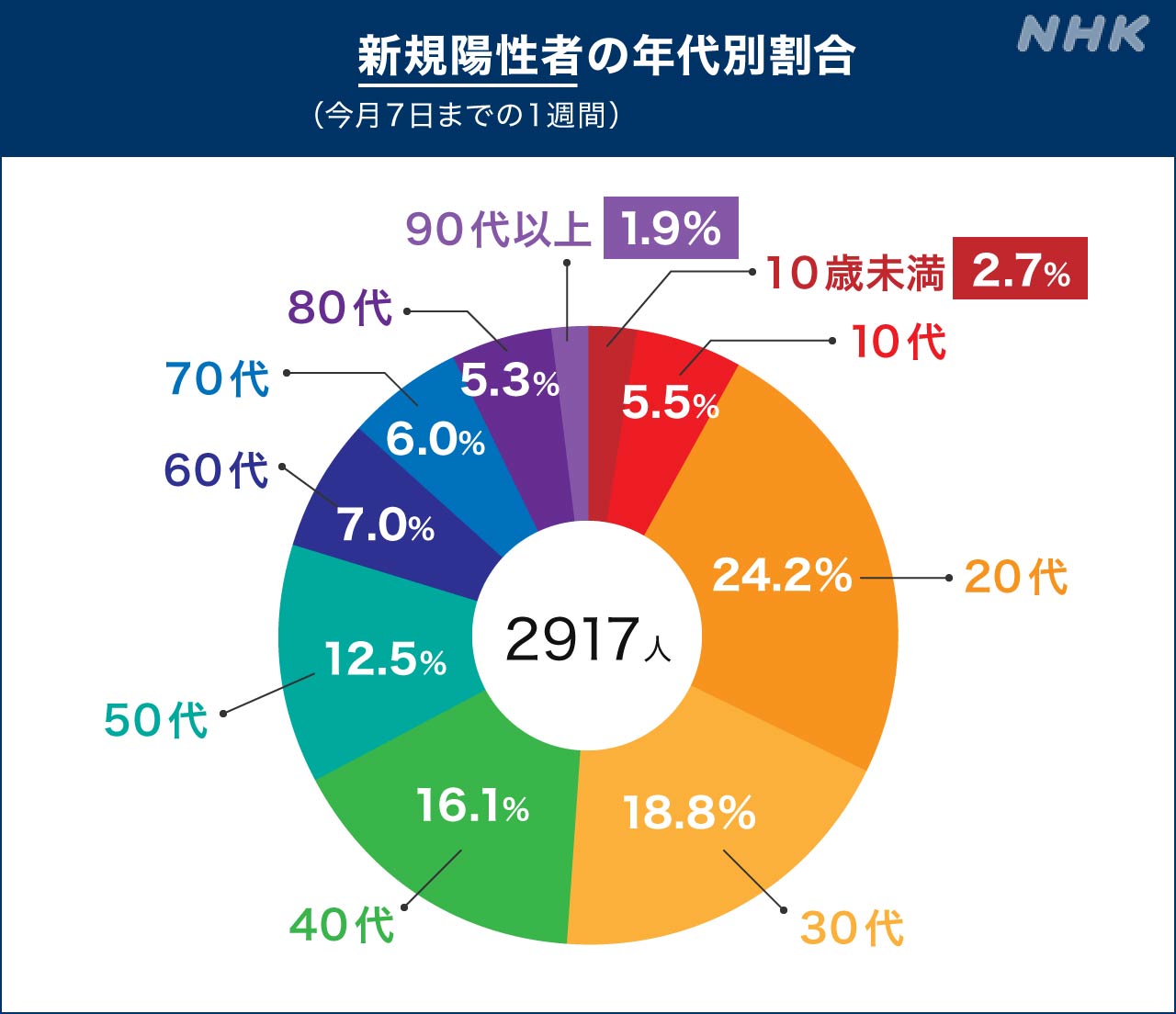 (*Infection rate by age in Tokyo) 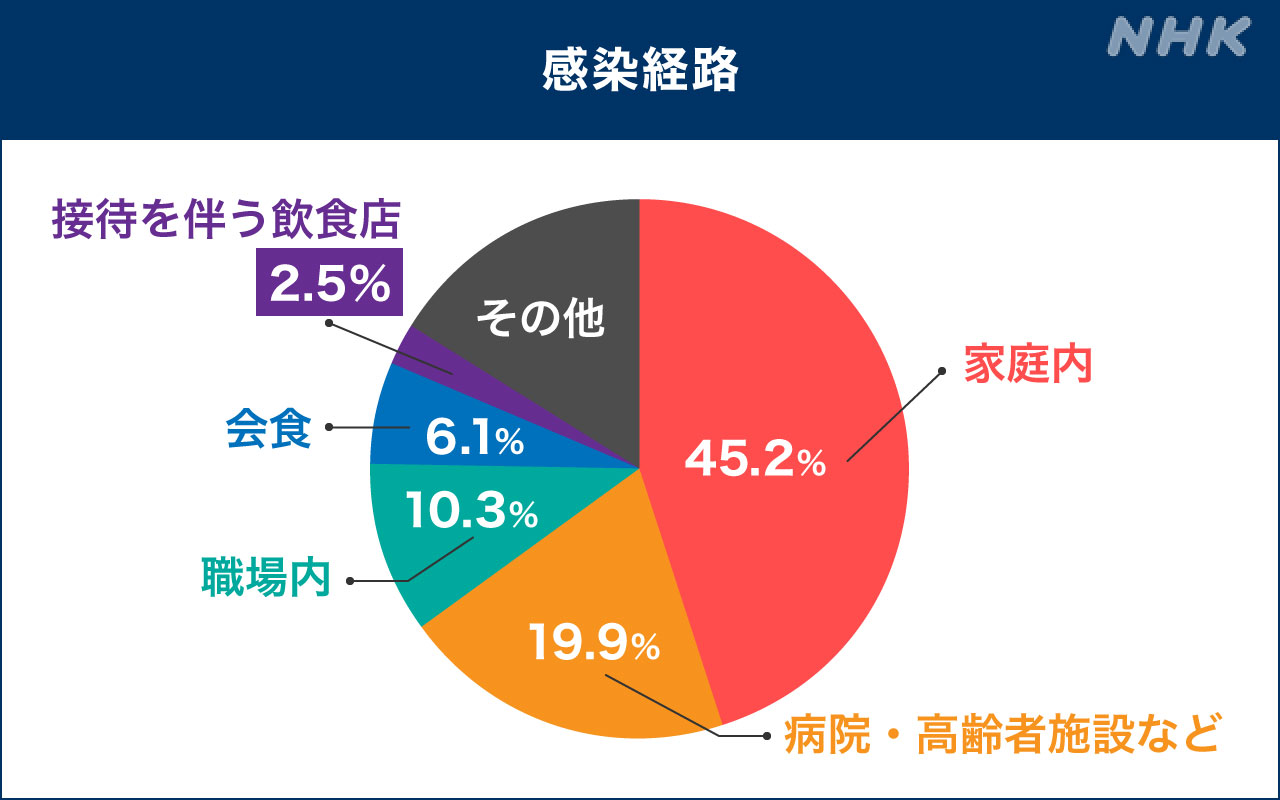