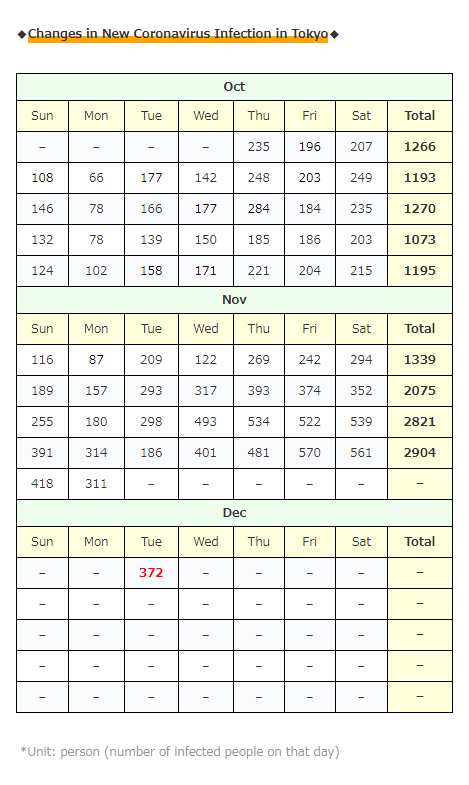 1There were two holidays in November (November 3rd and November 23rd (3 consecutive holidays)), so it’s easier to see the increasing trend if you think about it except for the days after the holidays … 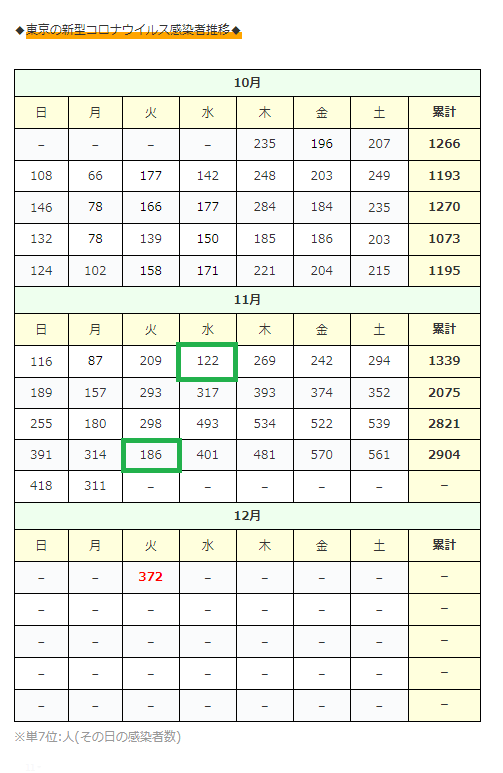 How will this increasing trend stop? .. ..

・Infection in the facility [25] people

* The large-scale outbreak that started on August 26th ended on November 5th, but it seems that one new infection was confirmed today. (It is unknown whether it is the same case or another case)

* Other details have not been clarified, but the following information was also available.

Fuji City: Four clusters such as factories and amusement facilities are occurring 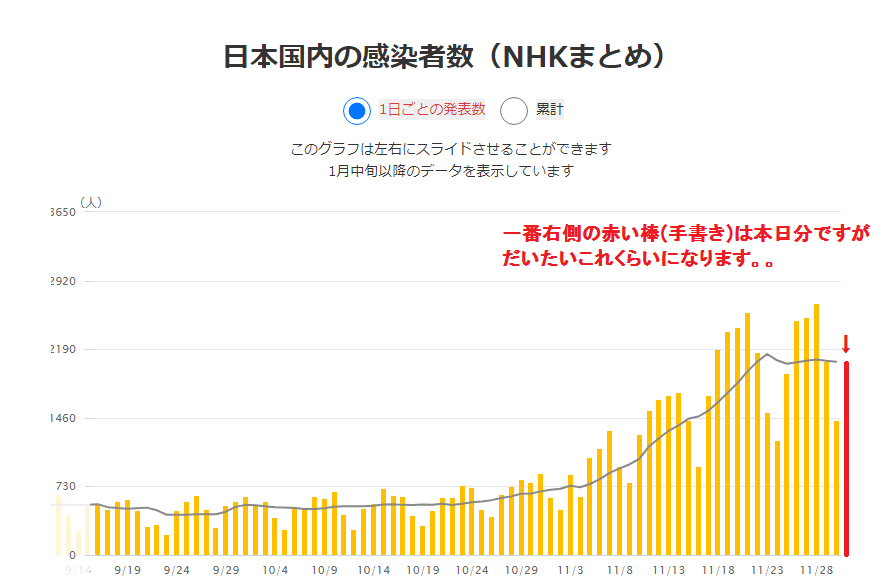 As you may already know, it seems that the United States has applied for the emergency use of the second vaccine!

The new Coronavirus vaccine (COVID-19) from Moderna also seems to be highly effective.

This is also very effective!

There are two places to be worried about.

①Even if the vaccine is administered (although out of 30,000 people), 11 people are infected.

However, regarding ①, there seems to be a vaccine effect that even if 11 people are infected, it does not become serious, so I would like to inoculate the vaccine as soon as possible!

* In Japan, we have contracts for 25 million people with this Moderna vaccine by next fall, of which 20 million will be supplied from January to June next year.

The story changes again, and in Japan …

①From December 2nd to December 22nd tomorrow, restaurants in the northwestern part of the prefecture near Tokyo will serve alcoholic beverages until 10 pm

②Refrain from going to and from Tokyo as much as possible

③Be careful especially when traveling to and from Tokyo for the purpose of eating and drinking.

It is said that Chiba citizens will be requested to cooperate with these.

What is unclear is that there are no penalties for this request and no cooperation fee will be paid.

If you request cooperation money in a short time, the government will give you support money. .. .. ??

No cooperation fee, but please cooperate with the request.
This really doesn’t make sense.

In Hokkaido, the situation is as follows as of yesterday.

There are many other cases, but as mentioned above, there are many large-scale outbreaks of more than 100 people.

In Asahikawa City, the bed usage rate of patients with the new coronavirus (COVID-19) has already exceeded 66%. 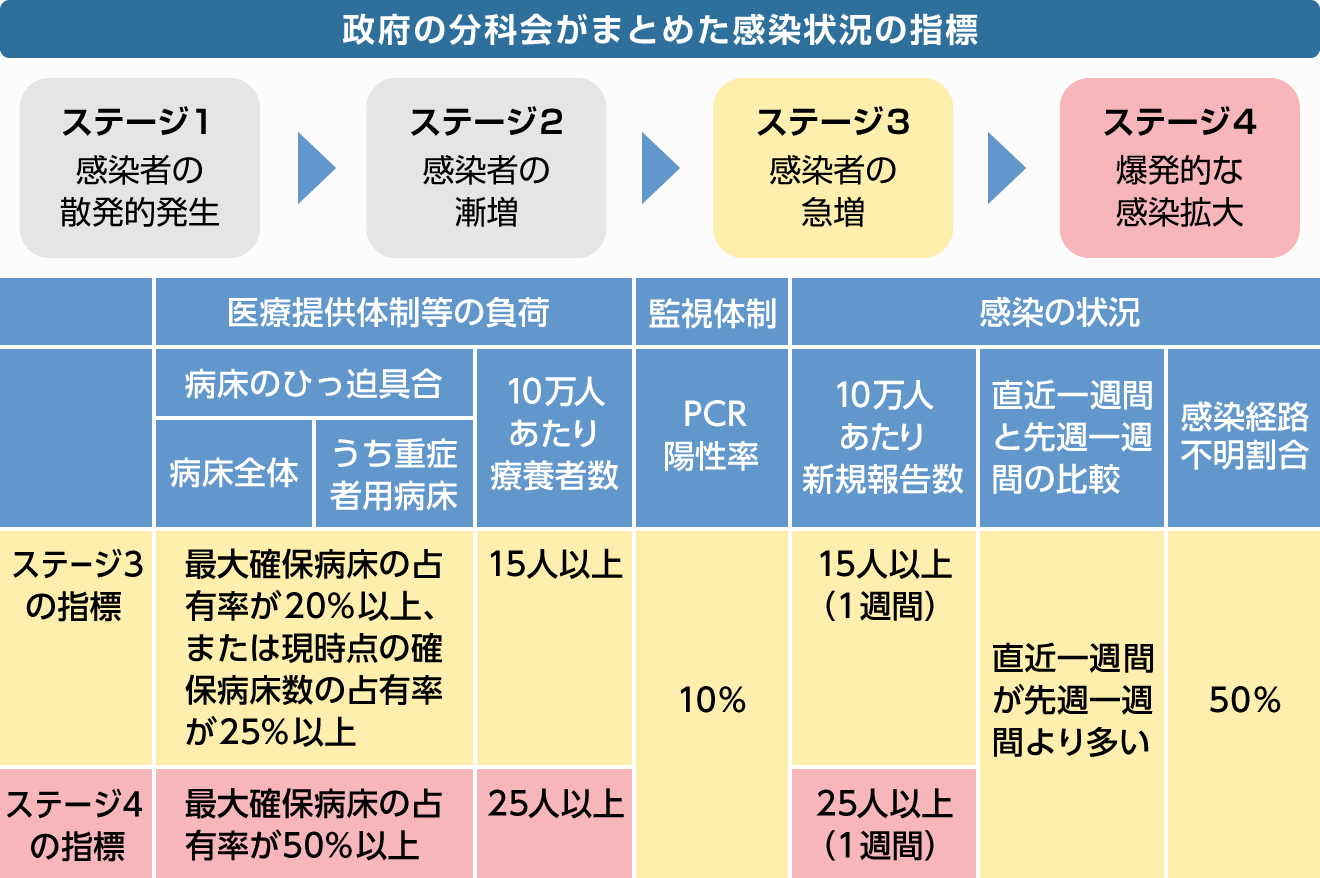 Speaking of this area alone, it is already in the state of “Stage 4” …

In response to this infection situation in Hokkaido, Sapporo City will cancel the coming-of-age ceremony in 2021 …

The important memories of various lives will be sacrificed …

That is why it seems that this new coronavirus (COVID-19) must be terminated as soon as possible.

And next is here!

Governor Yoshimura of Osaka said, “I want the government to do more important things such as COVID-19 measures. The media should talk more about COVID-19-related matters related to human life, not just crappy projects. “

On the contrary, the media refuted in the article that, “No, who did the Osaka Metropolis Plan or referendum at this time?”

What is important is that the “person in the position of governor” called “Osaka Prefectural Mayor” says as follows.

If the government compensates for the leave of absence, everyone can refrain without worrying about it …!

At the end, I will introduce it quickly!

It seems that there are multiple cases that are being consulted with the police due to suspicion that multiple restaurants are making fictitious claims in “Go To Eat”!

There are also cases of “commercialization benefits”, but they are everywhere … people who abuse them …

In the accommodation industry, the number of guests in October has decreased by 33.6% from the same month of the previous year!

It seems that it decreased by 46.6% in September, so it has improved considerably, but …

The number of foreigners decreased by 97.3%, but on the contrary, the difference was only 33.6% …

The following two points were emphasized in the countermeasures.

…… Well, I feel that there aren’t enough measures at all …

Regarding the “shortening business hours” and “curfew”, there are a lot of objections from experts in the United States …

“The trend of infection spread cannot change after 10 pm”

That’s right, everyone thinks about it …

I feel that it is easy for Japanese people to feel the atmosphere that “Oh, it’s a difficult situation now” because of such “requests”, so as many people as possible refrained from doing so in Japan. I really hope that this measure will be effective …

By the way, it seems that this year’s “New Word of the Year 2020” has been announced!

This is “a word that can be found in future dictionaries”!

Yeah, I’m pretty sure it was in fashion!