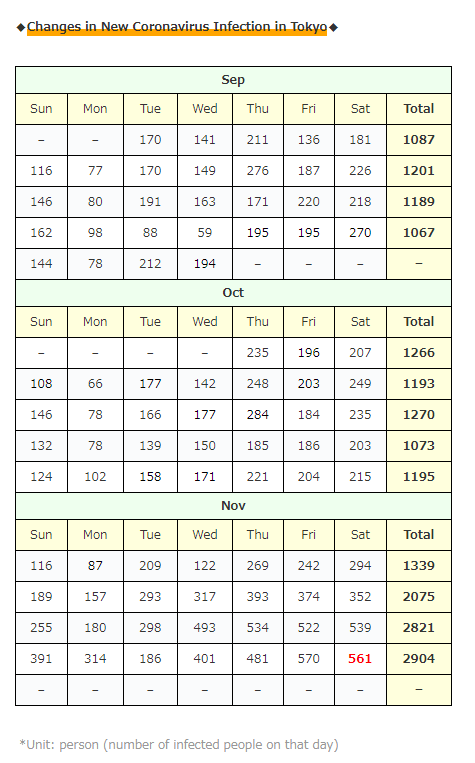 561 ( -9 from the day before) new infections confirmed in Tokyo.

To be honest, I was relieved that the number of newly infected people in Tokyo was less than the day before …

Even though it was Friday yesterday, there were a record number of 570 people, so I was afraid that “Well, will there be more than 600 people on Saturday ?!”, so I’m relieved that it didn’t exceed that!

・Outbreak of elderly facilities in the prefecture [9] person(s)

*Cumulative 4 people in the rugby club 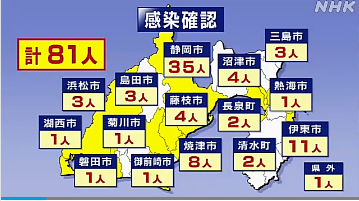 ・Outbreak at a dinner in Tsukuba City [9] person(s) 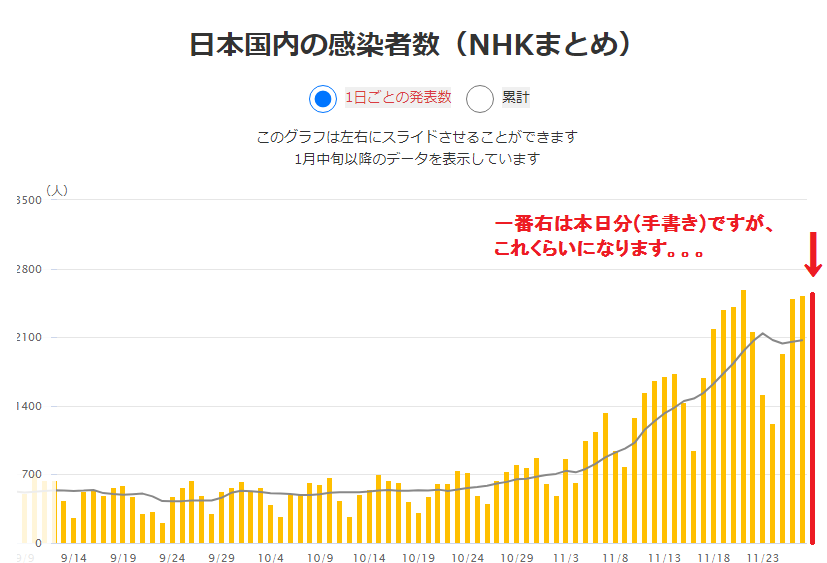 There was such news today …!

North Korea seems to pick fight with the world …!

AstraZeneca, which is expected by the world, is developing a vaccine for the new coronavirus infection (COVID-19), which is said to start vaccination in the UK next month.

But it seems that North Korea launched a cyber attack on AstraZeneca …!

Well, it’s turning the world too much into an enemy, isn’t it?

By the way, it seems that “North Korea tried to gain unauthorized access to a computer.”

Did they want to get rid of vaccine data?

It ’s England, but in the news late last night,

This is great news!

By the way, the infection situation in the UK until yesterday is … ↓ 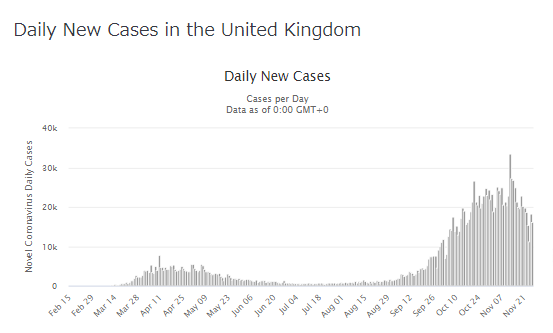 Even so, this “effective reproduction number” … I think … By September … It seems that the news was “1” or less in almost all regions in Japan …

…… And Japan has been hit by the third wave as it is now, so it’s not very helpful …

By the way, “collective immunity” is a method of setting

“how many new infections one infected person

(↑ The point is that if 10 infected people infect only 9 people,

the number of new infected people will decrease by 1 person,

who will be infected with the virus.

(* As mentioned above, this “effective reproduction number” will probably fall below “1” when the number of domestically infected people begins to decrease …)

From the 29th, it seems that the self-restraint of movement will be eased a little in 5 states. 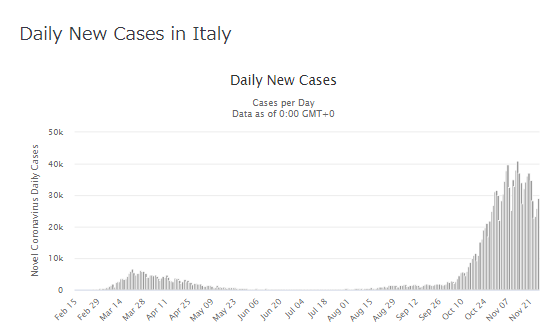 By the way, isn’t it a rule that every country “begins to relax and try to increase the risk of spreading infection again” at the “stage where it has finally begun to decrease”?

The other day, the news was “Temporary suspension of Go To travel campaign for Osaka and Sapporo”, but Prime Minister Suga and the governors of each prefecture said, “Please refrain from departing from Osaka and Sapporo!”

No, not only the destination but also the departure point should be temporarily suspended …

Rather, they should have stopped not only “destination” but “both departure and arrival” from the beginning.

And speaking of government …

According to Governor Kuroiwa of Kanagawa Prefecture, Kanagawa also wanted to set the infection status to “Stage 3”, but he couldn’t do that because the Minister of Economic Revitalization Nishimura told him that “other infected areas have not judged Stage 3!”

WHO (= World Health Organization) will send an investigation team to China to find the source of the new coronavirus infection COVID-19, but Ryan, who oversees crisis response at WHO, said, “It is a very uncertain speculation that China is not the source.”

WHO, I thought that they were on good terms with China, and also never thought they would say something like this …

I was a little surprised so I picked it up! lol

Requests to refrain from opening hours at stores that serve sake in Tokyo will begin today!

There are interviews for each, but it seems that there are various shops that comply with the “request for shortening business hours”, those that do not, and those that have not yet decided…

The consciousness of Japanese people will be tested for the next three weeks!

What will happen to Japan!

Mr. Omi, a subcommittee on measures against the new coronavirus infection COVID-19 of the government, is really doing his best!

At the time of the first wave, Mr. Omi was sometimes criticized as “only the government’s favorite remarks”, but he is really doing his best for the people!

“We have had many people cooperate with the message of the subcommittee, but we recognize that the stage of relying solely on individual efforts for the current situation has passed,” he said yesterday.

He said like “Prefectural governments should take proper measures! “

Everyone knows that it’s quite difficult from his standpoint, but he’s fighting …!

By the way, Governor Koike said yesterday as well.

“The government should think about the exclusion of Go To Travel from and to Tokyo.”

And aslo she said

“That’s why Tokyo is not in a position to request.”,

it seems that she do not request exclusion to the last…

I can understand what she is saying, and it’s true, but I don’t need to be particular about “which one should do” or her pride, so I want her to think only one thing to do, “prevent infection (protect the lives of the people and the people of Tokyo)”.

For us, it doesn’t matter which one do that…

Let’s do what we can do individually!