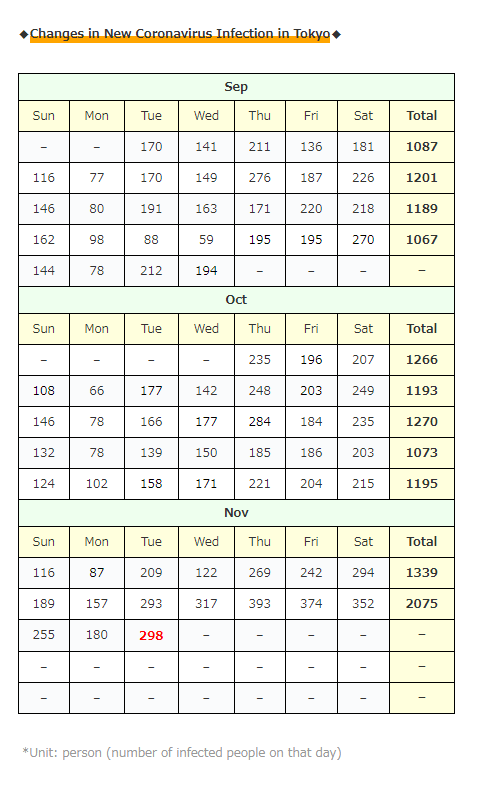 I’m glad it didn’t increase! Should I think …

・Infection at a dinner with friends and acquaintances [15] people

・Infection via other routes [16] people

*In addition, there seems to be an example of infection by driving with a friend.

・Outbreak of “Shinai no Oka Ichikawa”, a special nursing home for the elderly in Chiba City [3] person(s)

(About changing the counting method in Osaka City)

was the aggregation period, but after November 16th

It is said that it will be the amount that was found.

→ As a result, the numbers announced in Osaka will be almost the same as the previous day.

*In Osaka, details rarely came out on the day, so it would be nice if you could understand this on the day.

* Summary of outbreaks related to the “entertainment district at night in Susukino, Sapporo City [3 stores, 8 people]

・ Outbreak of “Dream House”, a special nursing home for the elderly in Sapporo City [9] person(s)

・ Outbreak of “Care Home Minamiawaji”, a health facility for the elderly in Minamiawaji City [1] person(s)

・Nosocomial infection in a hospital in Sakyo-ku, Kyoto City [12] person(s)

* Others At this time (20:30), it seems that more than 10 people have been confirmed to be infected in the following 9 areas …

* Although it was still Tuesday, there were many areas where the number of infected people in the prefecture was updated … 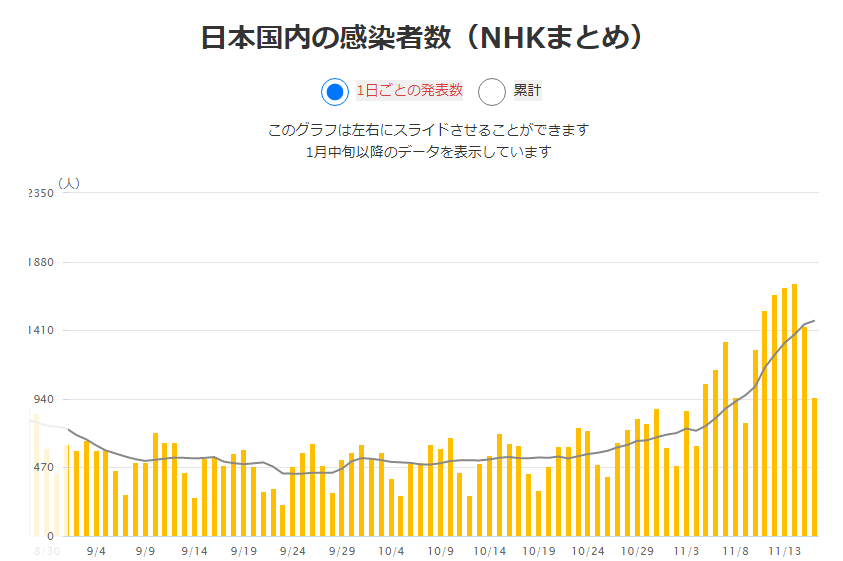 There was a lot of news with a lot of characters (lol) today, so I’ll summarize it as easily as possible!

(I say so every time, but it’s getting longer every time …)

it seems that 130 outbreaks have occurred in the week until November 9th …!

And in areas where the infection is spreading, there are such requests.

“Request to the Minister for Economic Revitalization Nishimura to change “Go To Eat” for 4 or less people.”

In the meantime, there was a lot of news about Prime Minister Suga’s thoughts on the new coronavirus (COVID-19), so I would like to introduce it!

(At the government-ruling party liaison conference)

“The increasing trend of the number of newly infected people is becoming remarkable.”

“We are implementing measures according to the infection situation with the utmost caution in cooperation with each local government.”

“We will support when each local government makes a request to shorten business hours by utilizing the new frame of 50 billion yen.”

“Request the prefectural governors to consider the government’s support measure “Go To Eat,” for example, excluding a certain number of people, such as 5 or more.“

* ・Establish a test and medical care system at more than 24,000 medical institutions, etc.

・Coordination of dispatching 600 insurers over a wide range

In this way, he explained that he is supporting the efforts of local governments, and he emphasized that he will take thorough measures against infectious diseases such as “wearing a mask” and “avoiding three stakes”. ..

Prime Minister Suga (government response) seems to move like this.

But … the word “warning” that everyone loves has been happening again recently, so…

do you think you should just say “warning”? !! (Angry)

(*Japanese politicians often do not take any effective measures and just keep saying that they have a strong sense of caution, which is disappointing to the public.)

And as a result, it’s quick, but it’s late yesterday and it’s starting today ↓

(Ministry of Agriculture, Forestry and Fisheries)

“The government requested the prefectures to change the government’s support measure” Go To Eat “by supporting 4 or less people (for example, dividing the table for 5 or more people).”

It seems that the government’s cluster countermeasures team is currently dispatched to Sapporo City, Hokkaido, but this is the current situation.

According to Mr. Takuya Yamagishi, director of the National Institute of Infectious Diseases, who is a member of the cluster countermeasures group and is working on countermeasures for Sapporo City, the current situation is as follows.

・The number of clusters far exceeds the response of health centers.

→”Infection route identification survey” and “measures to prevent further spread” have not caught up at all.

・Therefore, priority is given to responding to “elderly facilities,” “nursing facilities,” and “medical institutions,” which are important for “reducing the number of severely ill people.”

・As a result, although they are proceeding with the identification of “rich contacts” for schools and companies with many young people and mildly ill people, they have no choice but to postpone the investigation of infection routes and measures to prevent the spread.

As a result, it is said that the following 3 are currently prioritized.

②Set the number of newly infected Susukino to 0.

This situation can only be seen as a “situation that has not been fully dealt with”, so if it cannot be dealt with, I think it should be a state of emergency or a lockdown …

The last is here! It’s data! 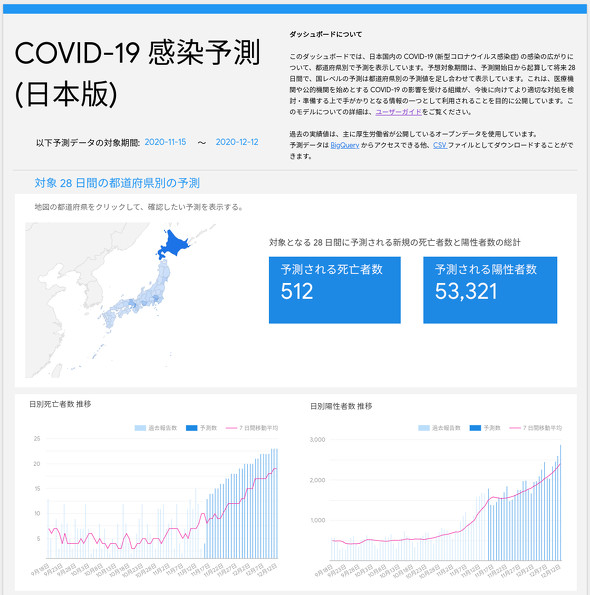 This site is “a data that predicts the future from the infection situation in Japan so far” predicted by Google!

Well … as you can see (as expected?), it’s increasing at a tremendous rate…

I hope it’s not what it expected …

Let’s all do our best to prevent infection, and let’s definitely miss google’s predictions!

following the recent report on the “90% effectiveness” of the new coronavirus (COVID-19) vaccine being developed by Pfizer of the United States,

yesterday, it was reported that the new coronavirus (COVID-19) vaccine, which is also being developed by Moderna in the United States, is “94.5% effective”!

More than 30,000 people have participated in clinical trials, and at the time of the provisional results, 95 cases were infected with the new coronavirus (COVID-19) … Only 5 people were vaccinated and infected. There were 90 unvaccinated fake drug groups)!

Moreover, it seems that none of the five vaccinated people have become seriously ill!

In Japan, we have a contract with Moderna for 25 million people, of which 20 million will be supplied again next month from January to June!

I definitely want to laugh by this time next year! Lol

Hopeful news has been going on lately and it feels good!

After that, it would be great if we could somehow prevent only the domestic “third wave” …