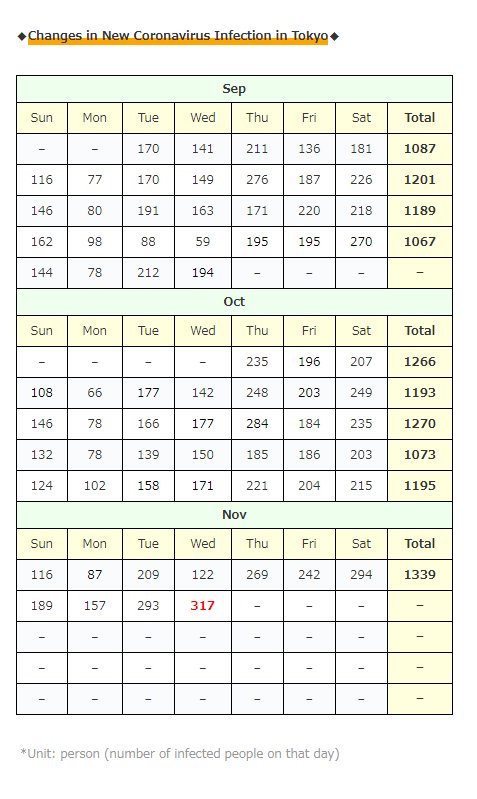 Because today is still Wednesday…

And from tomorrow, it is “Thursday-Saturday when many  number of infected people will be announced” …

* This calendar shows how many new infections have occurred in Tokyo recently.

”The number of asymptomatic infected people exceeds 100, which is the highest ever, but it’s the result of aggressive test”

”There are 22 people who did not live in Tokyo and did not come, but only the specimens were brought into Tokyo and became positive.”

”(From the above) there are actually less than 300 people”

”I understand that you’re a little worried because the number of infected people is increasing, but I think there are many opportunities to get together for the year-end and New Year holidays, but please act consciously so as not to infect the elderly.”

This person has no intention of taking measures………

・Outbreak of “Lavire Asaka”, a nursing home for the elderly in Asaka City [2] person(s)

・No detailed information was found today …

* At the New Coronavirus (COVID-19) Infection Control Conference in Osaka Prefecture, it seems that in Osaka, not only “restaurants with entertainment at night” but also infections in the following cases are common.

・Meeting while having a meal with a colleague

・BBQ and hot pot party with a large number of people

* Other than that, the number of people and details have not been clarified, but it seems that a new outbreak has occurred in the restaurant-related area with entertainment at night in Nagoya city.

* There are 13 cases of endless outbreaks in Aichi prefecture.

* It is a new outbreak that is different from the one before yesterday.

・Outbreak of “Care Home Minamiawaji”, a health facility for the elderly in Minamiawaji City [5] person(s)

* There are too many positive people today, so details will be announced tomorrow …

* Others At this time (20:30), it seems that more than 10 people have been confirmed to be infected in the following 3 areas …

From such a topic today …

The “Go To (Travel) Campaign” has been a hot topic these days, but from the reservation made on November 6th last Friday,

“a reservation for the purpose of arranging a business trip for a corporation” Sites ” etc.

are no longer eligible for discounts.

It seems that the Japan Tourism Agency explains that the reason why the target was excluded is that “at first, people did not move too much, so we also targeted business purposes, but the movement of people has recovered”!

“Why didn’t you exclude it from the beginning!”

“Even if it is said to be excluded now, it is difficult to deal with vendors and customers!”

In the first place …

The current situation is as follows…

It stimulates the economy! ↓

Since people do not move, the target is expanded to MAX! ↓

People are starting to move, so the target is only travel! ↓

Thanks to the increased movement of people, the number of infected people nationwide has increased!

When you hear that much, it makes you think “the campaign has nothing to do with infection.”

Actually, it’s just “the number of reports to travel agencies and accommodations”, so we think that,

“how many are actually …”

“In the first place, the infection can only be spread because someone brought it from another prefecture …”

Once, the government should stop the “Go To (Travel) Campaign” for about a month or two as a “rest period” … lol

It is a topic of “vaccine” that was not summarized yesterday!

After the news of Pfizer’s new coronavirus (COVID-19) vaccine ran around the world the night before yesterday, various other vaccine information came out!

I would like to summarize it a little carefully!

Speaking of the day before yesterday …

Japan has a population of 120 million, so it’s too scary to think that about half of Japan’s population is infected …!

Meanwhile, there was Pfizer news!

I was so excited that I tweeted on Twitter instead of the usual “summary article” (lol).

(*”I’ve already finished writing today’s “Summary Article”
I can’t put it on … but the news flash says, “Pfizer’s vaccine prevents 90% of infection with the new coronavirus.” !! !! Super big news that makes me too happy! !!”)

In a clinical trial of a new coronavirus (COVID-19) vaccine under development by a major American pharmaceutical company, Pfizer, it was announced that it has a preventive effect of 90% or more!

* By the way, what is the final stage of the clinical trial currently being conducted?

・The clinical trial is divided into three stages, but currently the third stage (final stage)

①Drug under investigation (vaccine under development in this case)

investigate how effective ① is compared to ②

It seems that the current vaccine development for the new coronavirus infection (COVID-19) is verifying how effective it is by comparing the numbers ① and ② among the people who are actually infected.

Of the approximately 40,000 clinical trial participants, only 94 were currently infected and the vaccine’s preventive effect was 90% or more, which means that
I wonder if there weren’t even 10 of the 94 people in the group who received the vaccine under development …!

And … there were no serious safety concerns!

Such super news ran around the day before yesterday! Lol

And two days later, as of November 11th today

Regarding the new coronavirus vaccine (COVID-19) being developed by Pfizer, the US Secretary of Health and Welfare said, “If Pfizer applies for approval on schedule, vaccination can start in December.” !!

According to the article, it is as follows.

・ First of all, inoculation will be started for elderly people in welfare facilities, medical staff, emergency personnel, etc. in December, and vaccination will be completed by the end of January.

・Vaccines from Moderna (US) and other companies will also be available and will be available to all Americans wishing to be vaccinated by the end of March or early April next year.

・It is possible to produce 50 million times within the year and 1.3 billion times next year.

The solution to the new American coronavirus infection (COVID-19) has been completely seen!

In addition, this vaccine will come to Japan “by the end of June 2021” “for 60 million people”, which is a little later, but there are other vaccines scheduled earlier (AstraZeneca vaccine etc,),

if this “new coronavirus infection (COVID-19)” is not solved at once in the world, the “○ wave” will come again,

so it’s great just to see the solution!

a lot of people are calling attention so that everyone doesn’t get too excited too much.  lol

“① Preventing the onset = If the” effective rate “is 90%, this new coronavirus (COVID-19) infection will be resolved, so it is welcome news.”

“Transportation of this vaccine requires a carefully controlled environment”

(* Most of the vaccines for the new coronavirus (COVID-19) from any company need to be stored frozen at -20 to -80 degrees Celsius.

“Is it protective and how long does the antibody in my body last?”

“We’ve got a little hope, but I don’t think we’ll be able to control it in six months or a year.”

“It is said that there is no safety problem for Westerners, but it is not clear how many side effects it has.”

“When the transportation system reaches -80 degrees, it is impossible to vaccinate at your own hospital like before.”

“You must not go soft with this!”

“It will take some time before it actually spreads. Be careful about the current infection prevention!”

… Attention, is it pasted too much? lol

Are you full? lol

But if you’re not really careful here, it’s going to be a big deal, so let’s all be careful!

■It seems that the increase will not stop anymore …

It is increasing at a pace of hundreds of people every day ….

By the way, there is something like this related to today’s “Vaccine Information Summary” …

Perhaps Russia was impatient after seeing Pfizer’s report, and announced that “our vaccine has an effective rate of 90%.”

In Brazil, a clinical trial of a new coronavirus (COVID-19) vaccine under development by China’s Sinovac was interrupted due to unexplained symptoms.

As I mentioned earlier in my “Summary Article”, the British government has officially requested hospitals in the country to “prepare for vaccination from early December.”

Also, the BBC makes a video so that everyone doesn’t get too excited (lol).

Everyone, there is good news, but first of all, the infection is spreading in Japan!

Let’s prevent this and overcome it!