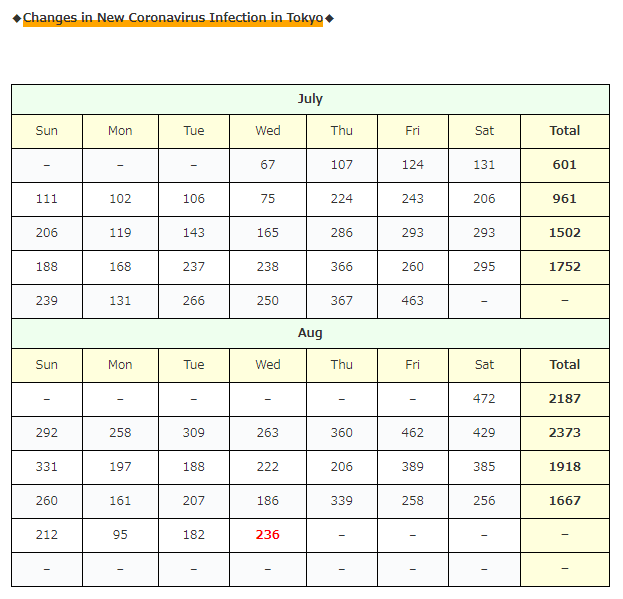 I expected that the number of new infections in Tokyo will increase to some extent because yesterday Monday (95 people) was too small, but it is almost doubled…

First of all, I will summarize

And information on measures against infectious diseases in Tokyo ↓

*Female in her 30s living in Souka City

+Two foreign men in their 30s in Tokorozawa

*This restaurant had “Infection Prevention Measures”.

*There was some information on infections at other nursing homes and nurseries.

*Checking whether 6 people have been contacted

Comparing the number of infected people across the country.

Comparing each region with the number of infected people per 100,000 population

This means that the more people they have, the more the infection is spreading.

Due to the smaller population compared to cities such as Tokyo and Osaka, the number of infected people in Okinawa is remarkable…

It’s also scary that Osaka, Fukuoka and Aichi are almost the same as Tokyo…

There was one news today about the “Go To (Travel) Campaign” in Tokyo!

This is a remarks made by the Minister of Economic Rehabilitation Nishimura at a Diet committee called the “Cabinet Committee of the House of Representatives”,

it seems that a decision will be made by analyzing the infection situation at a government subcommittee in September next month to decide whether to include the trips to and from Tokyo that are not currently included in the campaign!

If Tokyo will be included in the campaign… To be honest, it’s a bit scary…

However, I would be really happy if the number of infected people in Tokyo has calmed down by then!

By the way, Minister Nishimura said in the same committee that

“It has the same effect as reducing consumption tax by 5%, and since it is a fixed amount of 100,000 yen, it has a great benefit to people with low income more than wealthy class.”

But apart from the annual income,

I’m a little wondering if enough money has arrived for people who are really in trouble.

I think that they give 100,000 yen per person to make it fair, but compared with people who actually went bankrupt the company, people who were okay or people who were originally unrelated to COVID-19 and had a stable income (rent income, etc.), I think the situation is so different, so I think “is that really fair?”

And back to the story,

the politicians have responded to Minister Nishimura’s remarks about whether to include Tokyo in “Go To (Travel) Campaign”, so I will summarize it!

Here’s what politicians say about including  or not Tokyo

Chief Cabinet Secretary Suga “If added, the effect will be great.”

・”If the infection calms down, you can include arrivals and departures in Tokyo,” said experts at a government subcommittee.

・Tokyo has a large population, so if it is added, hotels and inns will be a big plus.

・・It is not necessary to do this “Go To (Travel) Campaign” itself rather than whether to add Tokyo.

・It is not certain how economically it will be, and on the contrary, there is a risk that infected persons will spread.

・Now, we should do our best to prevent new coronavirus infections.

・The spread of infection has not stopped in Tokyo, and the number of seriously ill people is increasing.

・If the “Go To (Travel) Campaign” allows a trip to/from Tokyo, the infection may spread nationwide.

・Tokyo arrivals and departures should be avoided, and the Campaign itself should be stopped in the first place.

・I would like to see what happens because it is a government business.

・First of all, Tokyo is working to prevent the spread of infection, and is asking the cooperation of business Offices and residents of Tokyo.

Governor of Kuroiwa, Kanagawa Prefecture “Thank you for coming from Tokyo”

・Some people say that the spread of infection in Tokyo has passed the peak.

・If the number of infected people really decreases, it would be great if tourists would come from Tokyo in the “Go To (Travel) Campaign”.

Governor Ono, Saitama Prefecture, “Things to and from Tokyo should be carefully considered.”

・Although the number of infected people in Tokyo has decreased a little, it is by far the highest in the whole country.

・Thanks to the official support, but the “Go To (Travel) Campaign” is too early to start.

・The Japan Medical Association says that it is necessary to make an effort to end the infection rather than balance it with the economy.

・If it is the result of the government’s policy with being distressed,
Not “good and bad”, but we should take thorough measures to prevent infection.

Most are the opposite.

I’m surprised that almost everyone is too opposed. .. lol

No, of course, I’m completely the opposite too. lol

First of all, “control of COVID-19” is still a major premise.

But about remarks of the Japanese Medical Association,

・If it is the result of the government’s policy with being distressed,
Not “good and bad”, but we should take thorough measures to prevent infection.

I was surprised to show understanding to the government like that.

A male living in Saitama prefecture

“I think it’s good for service and travel industry.”

“It was sad that I hadn’t been the target so far. “

“Thanks for being targeted, but I am worried that I will be disliked or annoyed at the destination.”

“My parents’ house with my grandmother in Sendai didn’t want us to go back in Obon season.”

Yes, ordinary Tokyo people understand the situation of themselves……

Anyway, first of all, I would like to control COVID-19, drive out the virus from Japan, and then regain my usual daily life and enjoy it to the fullest!

To change the subject,

This is the article about the vaccines and remedies that I always post!

The article is here ↓

↑The content is really hopeful, and there are many people who do not know it yet, so please read it by all means!

In the first place, the vaccine may be approved in a month or two! ?

Then, this “COVID-19 desease” will be over at once!

*By the way, it seems that Anges Co., Ltd., which is leading the vaccine development in Japan, has successfully completed the first and second clinical trials…

However, the commentator said, “I’m hoping for Japanese vaccine…”

But when it comes to the news, we (like me who is the general public) probably think that “I don’t care what country the vaccine is, so I want to take the fastest and safest vaccine early.”

There are about 300 people decrease today!

There was such news today,

it seems that Ibaraki Prefecture has created a system that can collectively manage inpatient information!

An information management system for new corona-infected persons in Tokyo, which was introduced in this summary article at the beginning of August earlier↓

In Tokyo, they finally started to operate

“HER-SYS, a system that can manage infected person information”

instead of collecting infected person information by fax from each public health center!

It seems that the patient himself can also input from the smartphone. I hope this will reduce mistakes, speed up detailed presentations, and improve analysis so that pinpoint countermeasures can be taken!

I’m really looking forward to it!

However, this system seems to be out of order now…

The government should create such a system for the whole country first, rather than the “contact confirmation app/COCOA” that has many malfunctions!

Masks will continue to be difficult, but let’s all work together for a while longer!