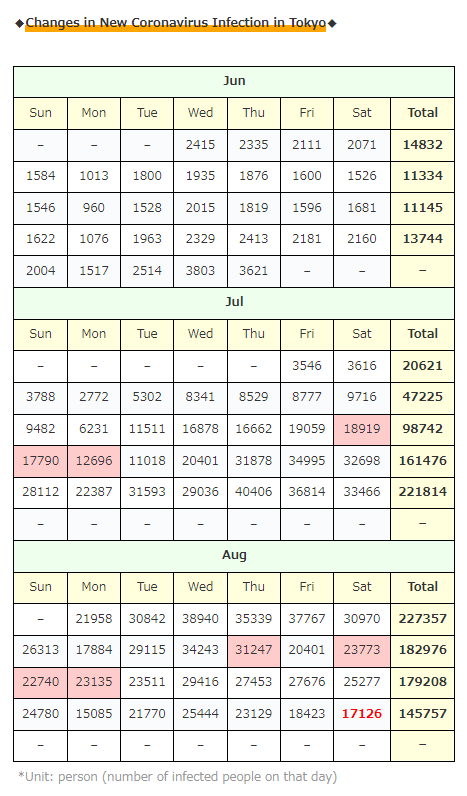 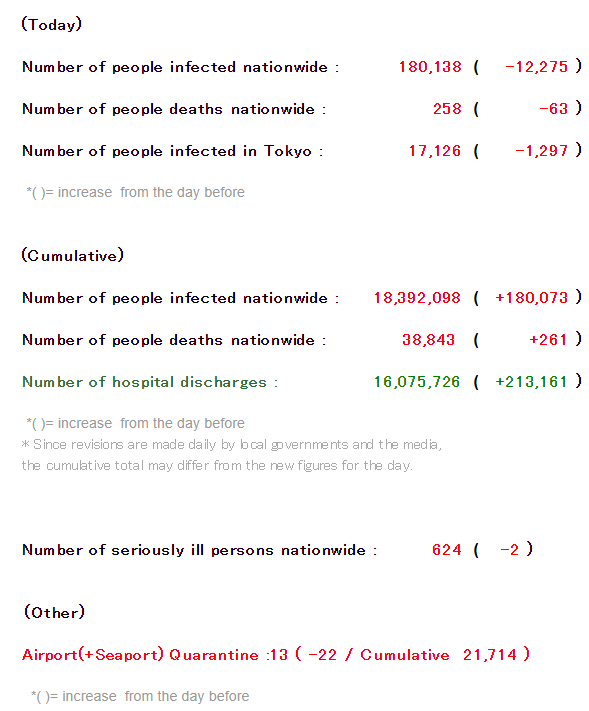 The number of infected people in Tokyo is…
Even the total for the week is steadily decreasing…!

Even so…
It’s a really strange phenomenon that the number of infected people is always decreasing every year at this time of year, even though the number of people in the city hasn’t changed at all… 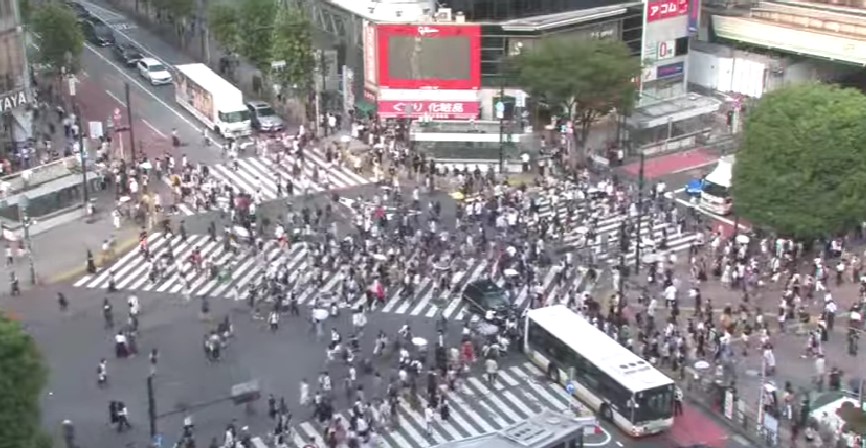 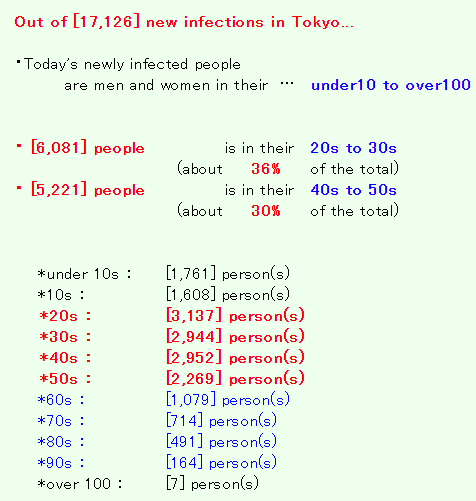 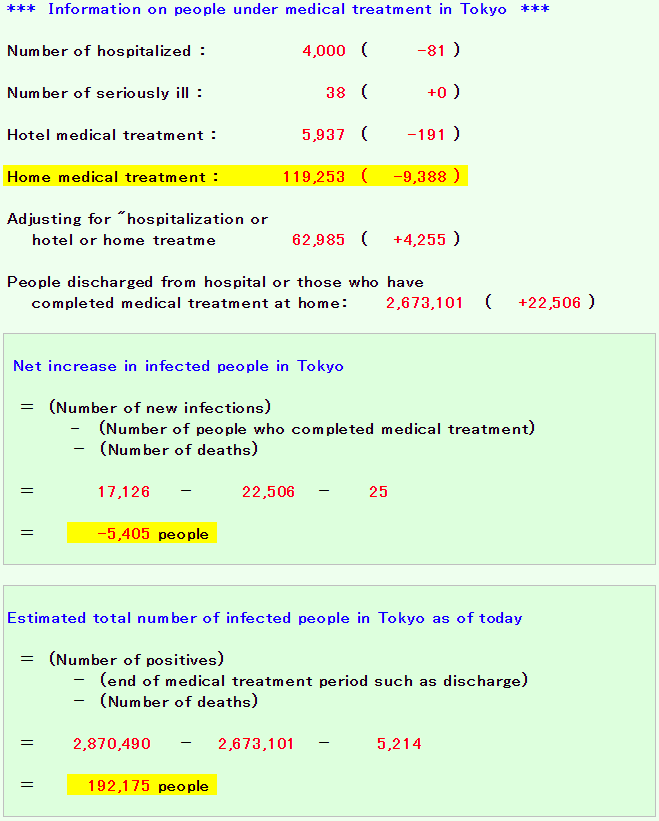 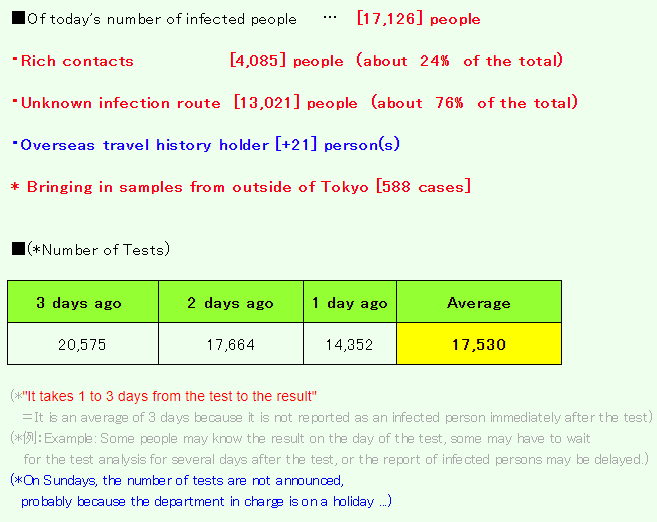 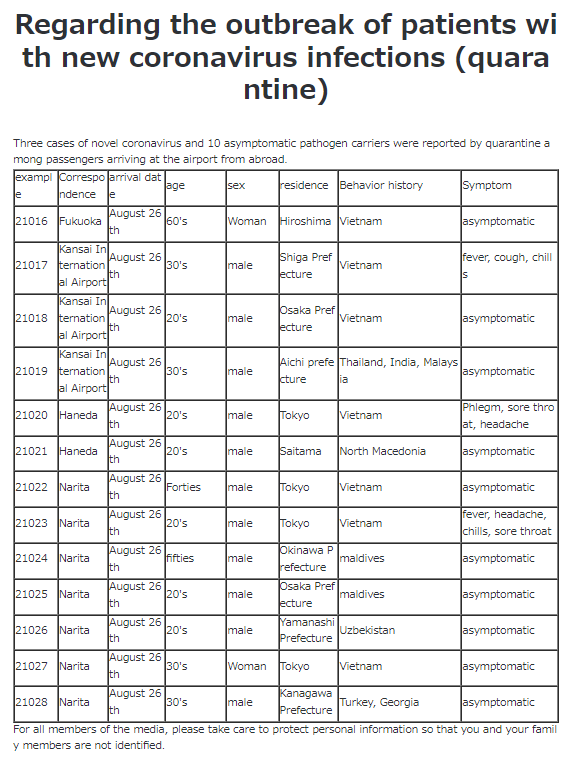 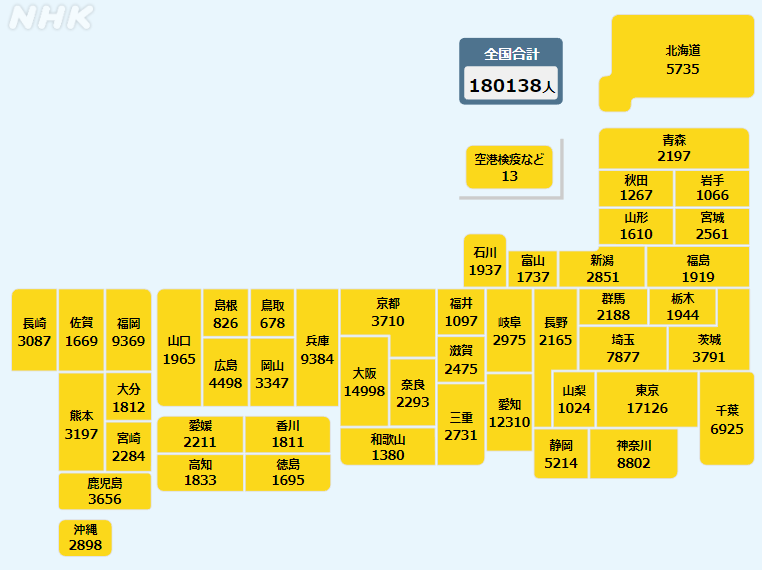 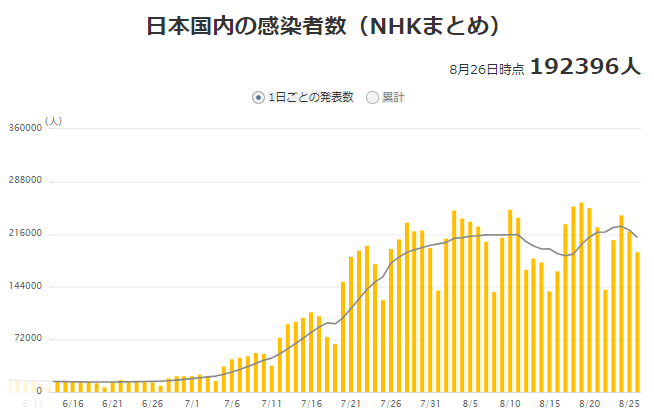 Speaking of which, the day before yesterday, on August 25th, the latest “variant discovery in airport quarantine” was announced, but… 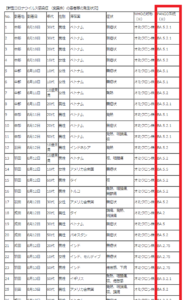 …but the Japanese government has neglected the variants too much, and the quarantine at the airport has been relaxed too much, so…
we’re at a loss as to which are the “verified variants” and which are the “unknown variants”…

It seems that almost all prefectures (42 out of 47 areas) have slightly exceeded the standard “for which the declaration of emergency had already been issued originally”.

If this exceeds 50%, even if you call an ambulance, it will not come, or even if it does come, you will not be able to find the hospital to which you will be transported, so…it means that in almost all areas of Japan, emergency transport is currently difficult…

As a concrete example…

It seems that there were 168 cases in which emergency transport was difficult in the last week, not in “Fukuoka Prefecture” but in “Fukuoka City” alone.

= Approximately 24 cases per day, 1 case per hour seems to be difficult to transport by ambulance.

Ambulance sirens aren’t heard that many times in an hour, so you can see how abnormal this ratio is…

Regarding the infection situation in Kagoshima Prefecture, Professor Yasuyuki Kakihana, director of the Emergency and Critical Care Center of Kagoshima University Hospital, seems to say as follows.

“Kagoshima has quite a large number of infected people in Japan, and it is in a critical situation.”

“Some medical staff can’t come to work, and the number of hospitalized patients is limited.”

“Originally, the response to patients who need to be hospitalized early and need early treatment will be delayed.”

“There are actually cases where patients who have no symptoms at all are recovering from the new coronavirus at home, and suddenly their condition worsens and they die on the way to the hospital.”

“Inpatients are not only elderly people, but younger generations such as those in their teens to 40s are also increasing.”

In fact, “medical collapse has been continuing for almost a month”, isn’t it?

In such a terrible situation, by the way, the Japanese government seems to be making such a forecast ↓

Ministry of Health, Labor and Welfare Expert Meeting (Advisory Board)

“The number of new infections has turned to an increase after last week’s declining trend, partly due to the increase in socioeconomic activities, and the infection level continues to be at a record high nationwide.”

“The burden on the medical system, including general medical care, has continued for a long time.”

“It is unlikely that the number of infected people will decrease soon, and it is expected that the medical system will continue to be in a difficult state.”

“We are concerned that the death toll will exceed the all-time high and rise further.”

Takaji Wakita, chairman of the Ministry of Health, Labor and Welfare’s expert meeting

(Regarding further shortening of the quarantine period,)
“Infected people should be recuperated for a period that may cause secondary infection.”
“It was set [10 days] in January this year when the Omicron variant began to spread, and the data-based rationale has not changed since then.”
“If the government shortens it, we should also discuss how much risk we need to accept.”

Like ↑, they know the cause of Japan’s current worst infection situation in the world, but the Japanese government does not take any measures against infectious diseases…!

On the contrary, even the advisory board, which always says only about easing things like “Remove your mask!”, has complained, “If the quarantine period is shortened any further, the infection situation will definitely worsen.”

It’s like “a child who goes to the park to play even though he hasn’t finished his homework”…
(*He has things to do first, but he only chooses what he enjoys.)