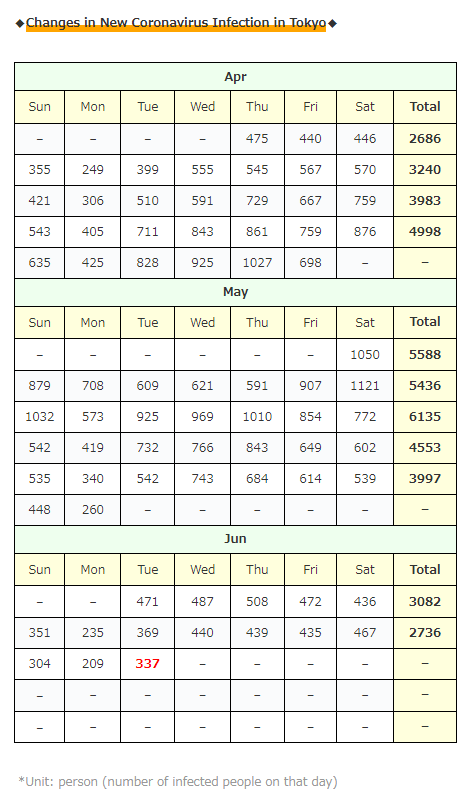 The number of new infections in Tokyo is still lower than last week!

But … this week, the situation continues to be “a little less than the same day of the week last week” than last week … 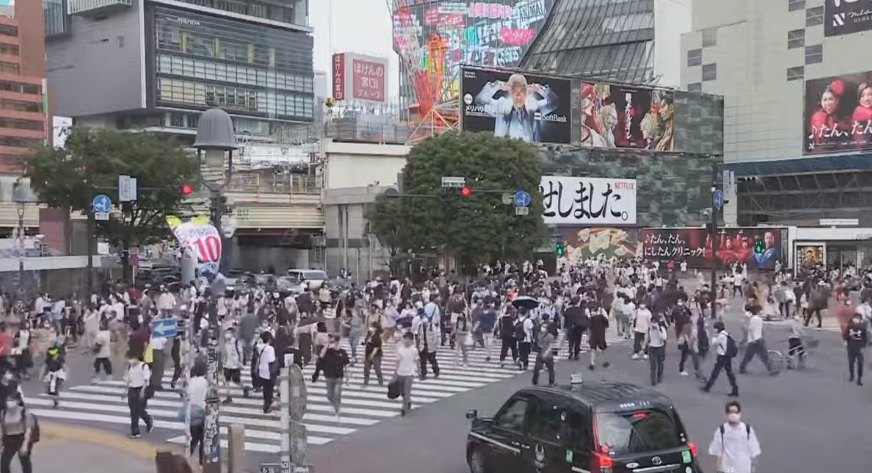 → It seems that no one was confirmed to be infected today! 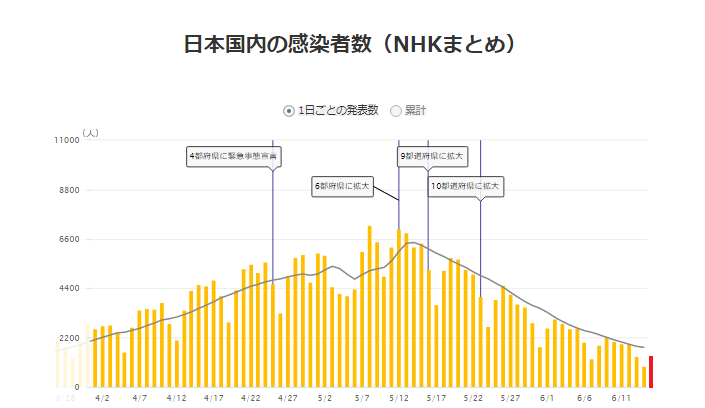 The day before yesterday, on June 13th (Sun), priority measures such as prevention of the spread of Gunma, Ishikawa, and Kumamoto were lifted, but…

“Kenrokuen” in Kanazawa City, Ishikawa Prefecture was reopened yesterday, June 14th (Monday) for the first time in a month! 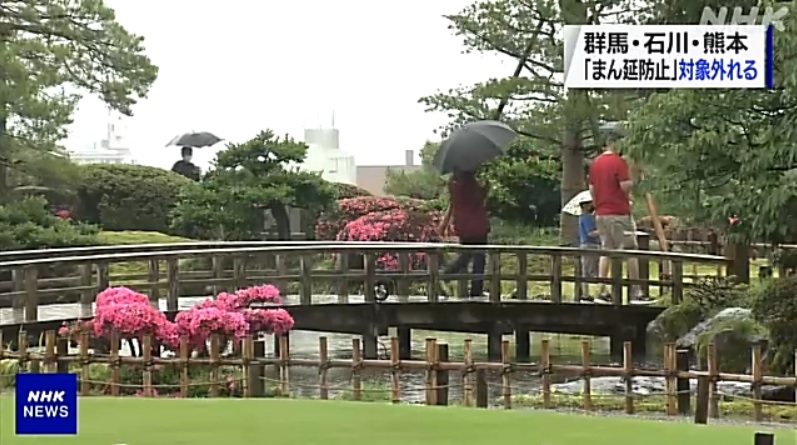 Personally, Kenrokuen is a place I haven’t been able to go to for a long time, so I really want to go there …!

June 20th (Sunday), the date of cancellation of the state of emergency, is approaching …

According to Prime Minister Suga, the decision will be made later this week!

And yesterday, the number of newly infected people in Japan fell below 1000 for the first time in about 3 months!

(Even though Monday is that the number of infected people is the lowest in a week,) I’m very happy !!

Nationally, the number of infected people was very small, even though it was Monday yesterday, as follows.

(From the summary article on June 14th)

↑↑ The worst 10 prefectures with infected people were also in many areas with less than 100 people yesterday!

… But…, after all, there is a feeling that it has stopped falling a little in Tokyo,

As for overseas, there was news of the spread of Russian infection today …

Apparently, “Russian-specific variant strains that are neither Indian nor British strains” are prevalent in Russia … Moreover, there are two types …!

And regarding vaccine-related topics, the vaccination rate for the elderly in Japan is currently as follows. 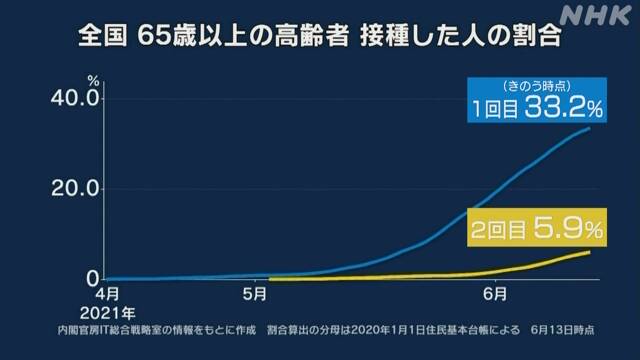 Also, it seems that 13.8% of all people in Japan have already completed the first vaccination!
(17.58 million people)

The pace has risen at once!

By the way, the vaccination rate of each prefecture is like this … ↓ 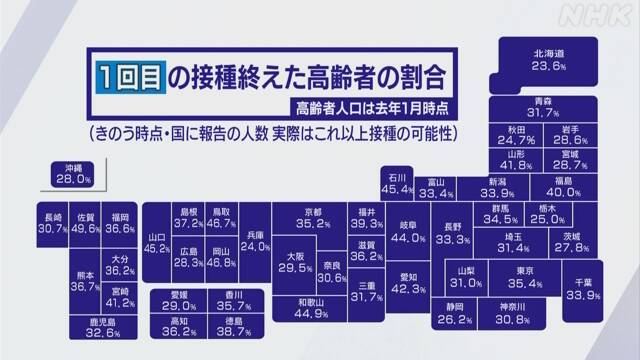 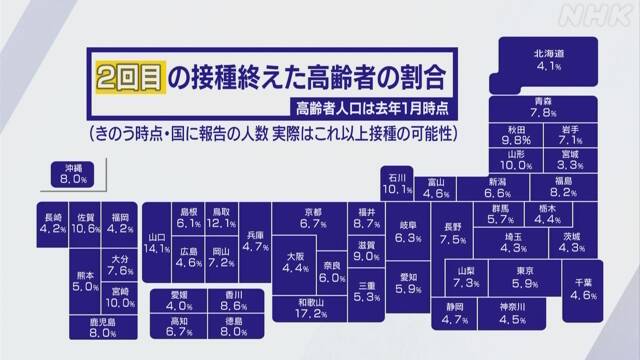 By the way, about the following news introduced yesterday

“The temperature of the vaccine freezer soared due to a manufacturing error, and about 6500 vaccines were discarded.”
“The freezer is on the collection list by the manufacturer, and 294 units are on it.”

Regarding the above news, it seems that the 294 units on the collection target list were all purchased by the government for this vaccination …

According to the NHK article above, the Japanese government seems to have purchased and deployed 294 units in 25 prefectures, but…

From the homepage of  株式会社EBAC, the manufacturer of this freezer ↓ 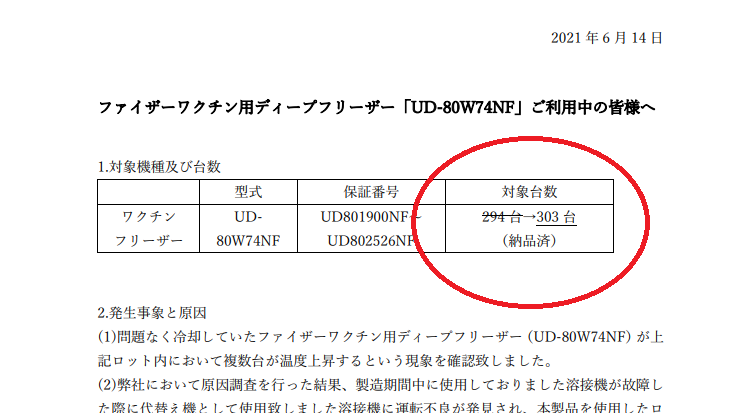 It’s all of the collection targets…

It’s really rare to have so many terrifying mistakes in a row, or conversely, it’s more like Japan …

Only we didn’t know that…?

Currently, Prime Minister Suga is going to the G7 (Group of Seven), but

it seems that the G7 included “agreement for the Tokyo Olympics” in the statement of the leaders …!

From this, it will be officially the “Olympic Games officially recognized by each country” …

In addition, it seems that the policy is to apply priority measures such as prevention of spread to Tokyo etc. during the Olympic!

I really hope that the infection will not spread at the Olympics …!

Actually, it would be best if all the people were vaccinated by the Olympics …