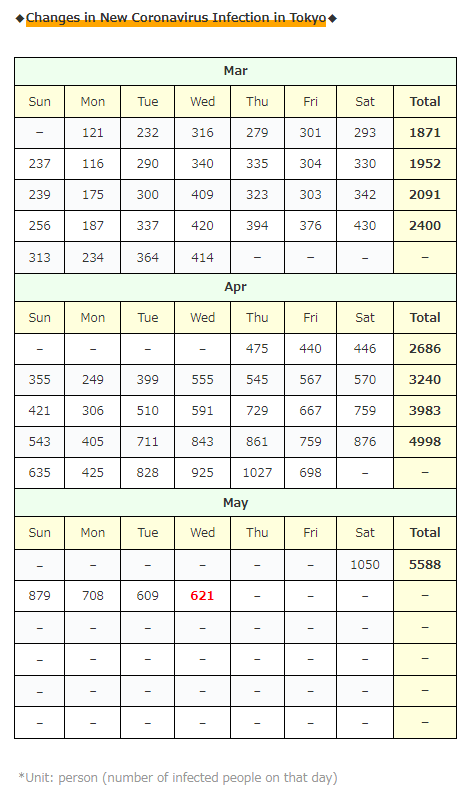 The number of newly infected people in Tokyo has settled down a little, probably because of the consecutive holidays.

Rather, it is summarized in ↑, but it seems that the increasing trend is temporarily stagnant nationwide …
(* In Japan, the number of infected people tends to increase dramatically after consecutive holidays.)

However, even during consecutive holidays when medical institutions are closed and the number of PCR tests is decreasing, the number of infected people is not decreasing so much, so I’m really scared of the first or second week after the holidays … 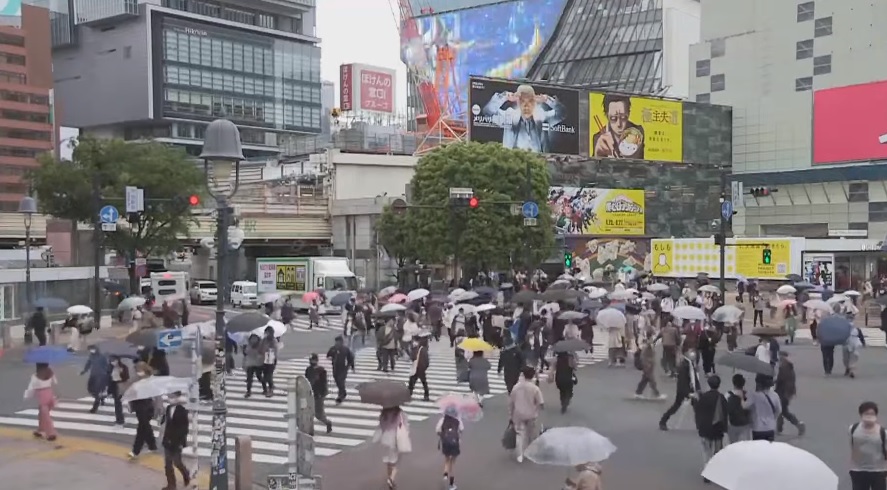 * Today as well, I could not confirm the cluster information, only the information on mutant strains and deaths …

*More than Tokyo for 37 consecutive days 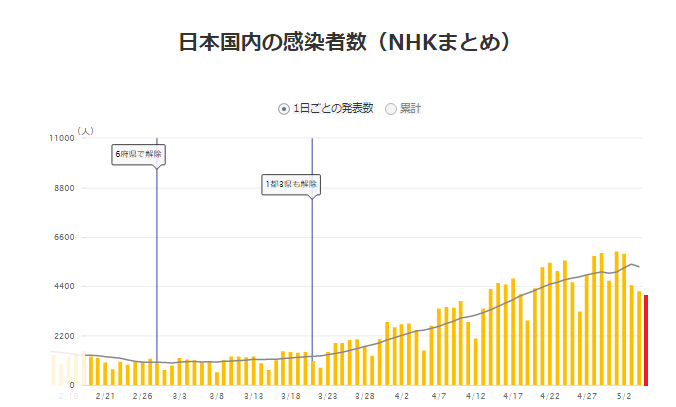 Currently, Japan is on consecutive holidays, but the number of infected people in each prefecture yesterday was like this …!

＜Number of infected people in each prefecture on May 4＞

↑ In this way, there are very many areas where the number of infected people is 10 or more despite the Golden Week holidays, and only 6 out of 47 prefectures had single-digit infections.

It is already a situation where infection is widespread all over the country …!

In addition, Tokushima Prefecture has requested the government to apply “priority measures such as prevention of spread”.

In this way, even in the whole country, the increase is not stopping, and the situation where new measures must be taken continues …

Under such circumstances, four regions (Tokyo, Osaka, Hyogo, Kyoto) are currently declaring an emergency, but the release date of the state of emergency, May 11, is approaching soon …

Regarding that PM Suga and Governor of Osaka said that,

Prime Minister Suga
“It’s hard to decide whether to lift the state of emergency.”

Governor Yoshimura of Osaka
“I find it difficult to loosen or lift the current measures.”

But when I think about it …,

What was the reason for them to set the release date to May 11th in the first place?

Did they just make an unfounded decision like “about two weeks after the declaration!” ??

I can still understand if they set the state of emergency to two weeks during periods of no consecutive holidays, but
（Usually, it tends to decrease in the 1st and 2nd weeks after starting the countermeasures. * If it is an effective countermeasure …)

This declaration period includes a big holiday called GW, so if the government is learning by analyzing the spread of infection during the year-end and New Year holidays, by all means, they should consider the infection status for a week or two after the holidays, so the cancellation date should be set accordingly.

（By the way, about the infection situation regarding consecutive holidays in Japan）

First … Last year’s Golden Week (May) was the number of infected people like this …!↓ 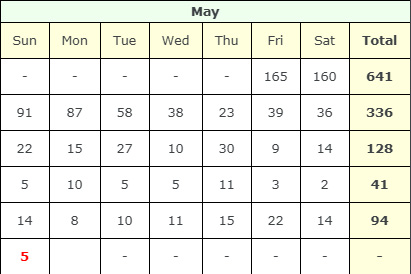 ↑ However, last year’s Golden Week was “the first state of emergency in Japan”, so everyone refrained from going out because of “fear of infectious diseases that people have never experienced”, so there were few people in the city.

Even if we compare it with the present, it is not very helpful because it is “a situation where many people are not refraining from going out etc.” …!

Therefore, I feel that the year-end and New Year holidays, which are “consecutive holidays” and “many people did not refrain from going out etc.”, are just right for reference …! 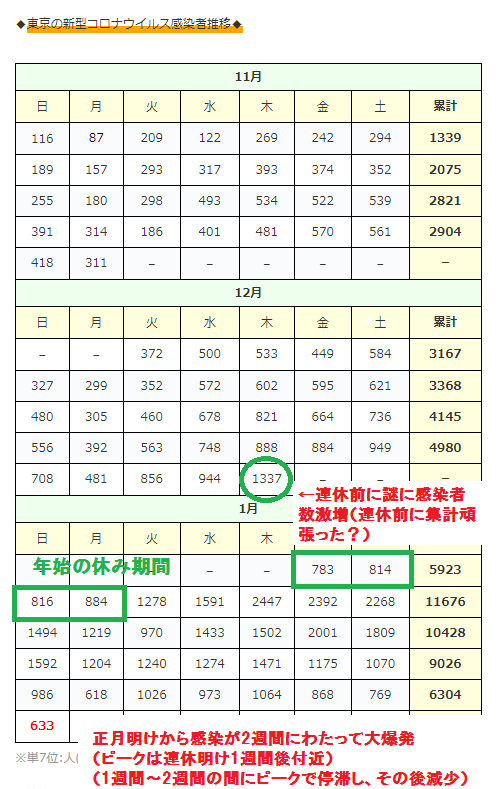 ↑ Looking at this, the number of infected people, which had been on the increase until then, decreased a little from January 1st to January 4th (Japan’s New Year holidays), and then the infection exploded at once from Jan 5…!

As far as the situation is concerned, it seems that the state of emergency including this GW should be seen for a week or two after the GW … 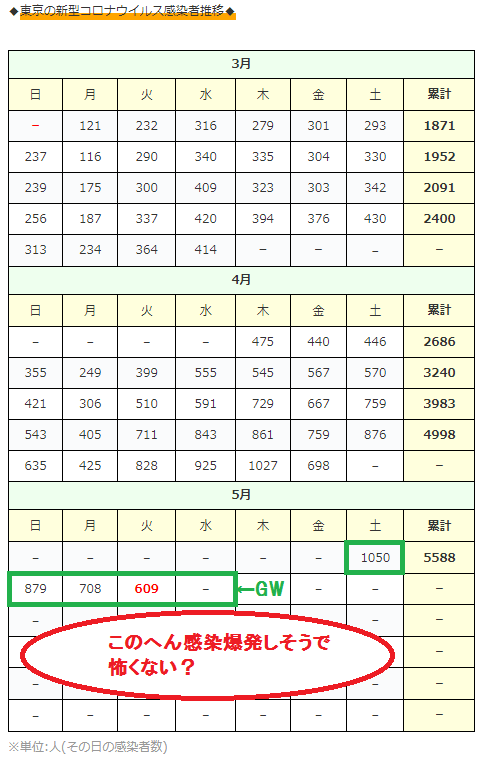 (*red circle : “Isn’t the infection likely to spread rapidly in this period?”)

By the way, the number of PCRtest seems to have actually decreased in the last few days. ↓ 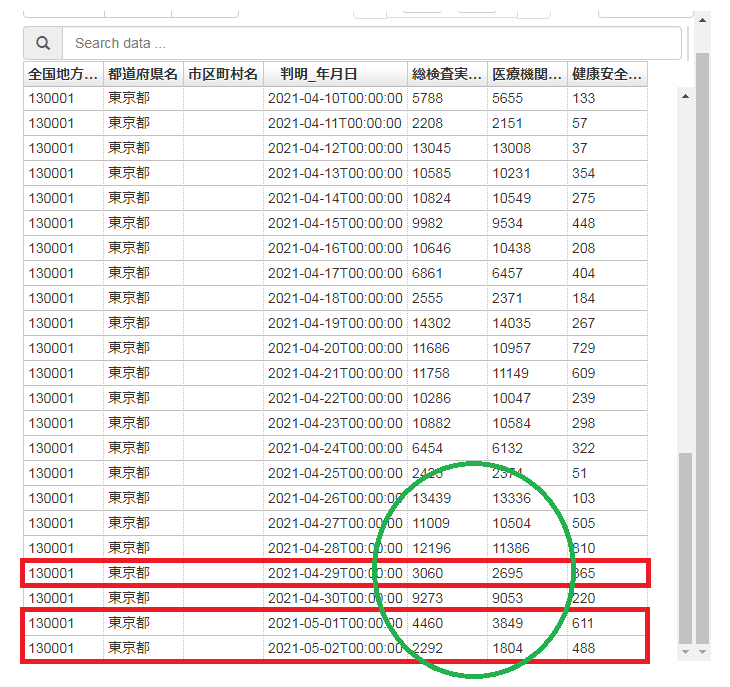 Looking at the number of tests, it is natural that the number of infected people decreases during consecutive holidays, but it cannot be explained that only Monday (May 3) was abnormally higher than last week …

There seems to be another reason because the positive rate cannot suddenly increase three or four times.

Well, what decision will the government make …

By the way, GW is also the last day today, but the flow of people did not decrease at all … 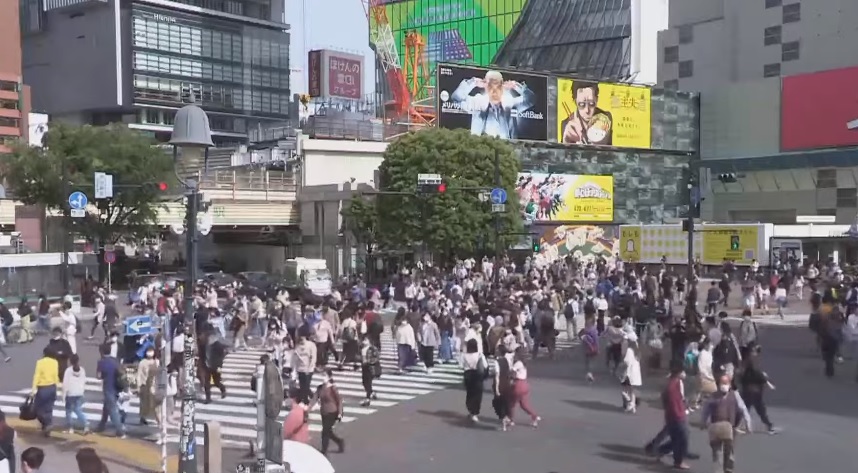 Japan is still taking the same meaningless measures as it was a year ago, and there is no progress, and the only way to limit the flow of people is to make a law, but politicians do not want to be disliked by the people, so the worst situation “they are just requesting = only calling, not forcing to the people” continues …

I hope that it doesn’t happen that
“many people can’t stand it at all, and play around, as a result of that, a dramatic increase in infections and continued regulation, continues……”