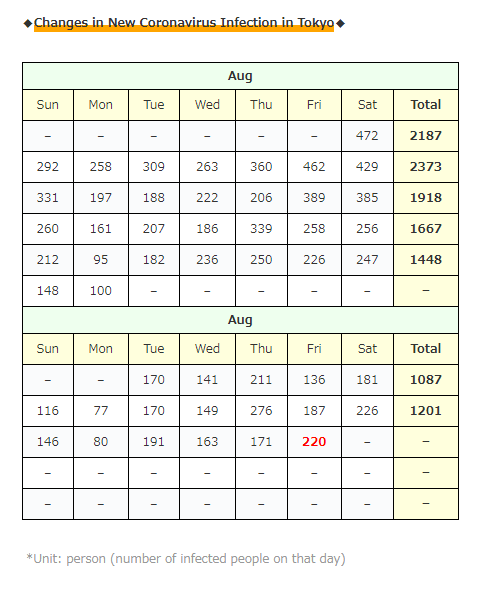 After all, except for yesterday’s Thursday, “the day with more infected people than the same day of the week last week” continues this week …

・ It seems that nosocomial infections at hospitals in Ome City do not stop. .. Infection of 5 nurses was confirmed today, and the number of selectors has increased to 38. ..

*Cumulative 44 people (including the infected people in Tokyo today)

Many outbreaks have occurred in this way. ..

I was looking for news related to the new coronavirus (COVID-19) also today, and I was just interested in about the extra news … lol 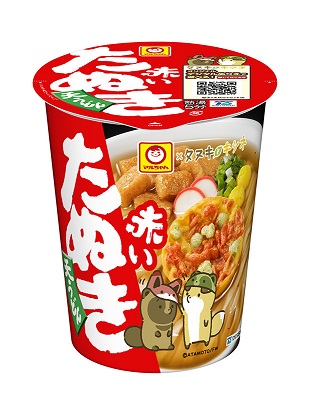 (*In Japan, these “Red fox” and “Green raccoon dog” are very famous cup noodles, and which one is more delicious is often contrasted.) 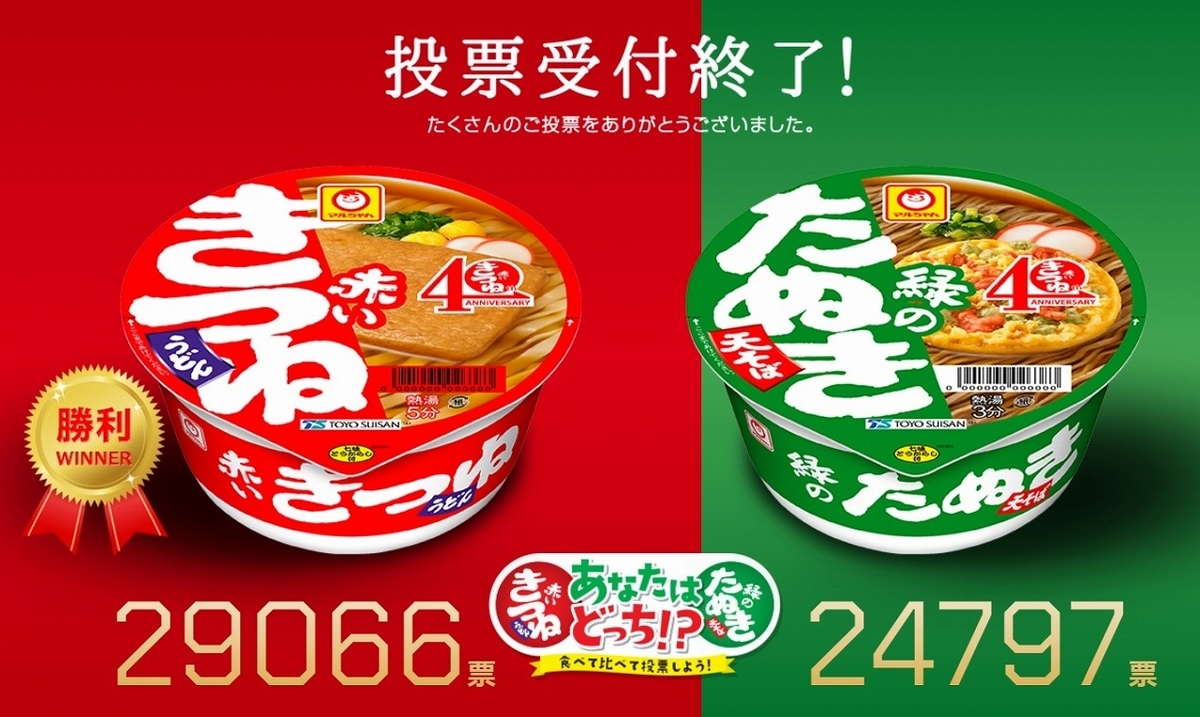 Five countries, including the United States and the United Kingdom, have created a framework for sharing confidential information, “Five Eyes,” but Japan has also been asked to participate and they are trying to make it “Six Eyes”, the naming sense is too cool! (It’s just my feeling, so there is no related to the article lol)

The Japanese research institute, which announced that it actually became higher after “researching whether the voice changes if the crocodile also inhales helium gas”, won the “Ig Nobel Prize”, and Japan won the award in consecutive 14 years.

Is it because it’s Friday?

There was a lot of interesting news!

Yes, I will return to the usual summary related to the new coronavirus (COVID-19). lol

The karaoke industry seems to be at its limit.

According to the Japan Karaoke Box Association, more than 500 of the 6000 karaoke boxes nationwide have been closed due to the influence of this “new coronavirus (COVID-19) infectious disease”.

It’s true that the karaoke shop also uses the entire building, and the rent (fixed cost) seems to be high …

Unfortunately, I don’t go to karaoke very often, but it’s true that I don’t feel like going to karaoke, especially at this time of “new coronavirus (COVID-19) infectious disease”, no matter how much measures are taken …

In the previous article, I saw an article that “Some karaoke shops changed different interiors for remote work”, but even operating such a change, everyone have to survive this difficult time.

Because it doesn’t make sense if it go bankrupt …

And to change the story, we will have 4 consecutive holidays from tomorrow!

There was some news for that holidays!

Governor Koike said about this holiday that,

“I want you to take thorough infection prevention measures when traveling, going out, or visiting graves.”

“The correct prevention has been communicated so far, so users and businesses should follow the rules!”

“Please warmly accept the citizens of Tokyo at the host facility!”

“I’m worried that the number of positive people will remain high.”

“It is important how to avoid increasing the number and how to control serious illness and death.”

… According to Governor Koike’s remarks, it seems that the lessons learned from the consecutive holidays, which drastically increased the number of infected people in late July, are not being utilized at all.

After that, the number of newly infected people in Tokyo rose to nearly 500… 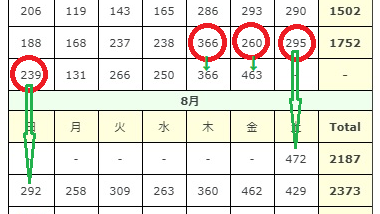 As far as Governor Koike’s remarks are concerned, it seems that we will be forced to spend consecutive holidays with no plans and no measures, but at this time when (maybe) the infection is controlling again, I hope the infection doesn’t spread again …

Meanwhile, it seems that the general public has a very high of their mind!

Although the PCR test cost as much as 30,000 yen (!), it seems that more and more people are testing on their own before traveling or returning their parent’s home.

At the clinic in Chuo-ku, Tokyo, it is said that about 40 cases are inspected a day recently.

It seems that some people are being tested to confirm whether they infect or not because there is “asymptomatic”, they do not want to pass on to their elderly parents at home.

I really admire those who take great care in preventing infections in this way.

I understand that everyone gets angry at Governor Koike and Tokyo, who are not trying to take measures, but let’s emulate the people mentioned above and work hard together to bring them together!

Meanwhile, in Tokyo today, the number of newly infected people is 220, which is a very high number, but the government is moving like this again at the wrong time.

Kazuyoshi Akaba, Minister of Land, Infrastructure, Transport and Tourism officially announced at a press conference after the Cabinet meeting on the morning of the 18th, so the handling of travel products for the “Go To (Travel) Campaign” “departing from and arriving in Tokyo” from 12:00 noon on the 18th today, it has started. ..

Moreover, he says, “If the infection spreads again, we will reconsider whether to postpone the inclusion of “departures and arrivals in Tokyo” in the campaign.”

And if the departure and arrival in Tokyo is postponed, the government will cover the amount equivalent to the actual damage for all cancellation fees of accommodation facilities (including foodstuff costs for purchasing) and travel agencies …

I understand that the travel industry and the accommodation industry are limited, but I think that way is not the case …?

It means that they have started accepting reservations

even though they may postpone it,

and if it postpone, the government will cover it all = drop money in some industries, right?

However, it will be profitable for the travel industry and the accommodation industry anyway, so I think they are very happy. Rather, it doesn’t matter if you postpone it or make a reservation! It’s finally in a state.

It’s the news that we were something difficult to accept!

and here are a few more news items!

It seems that the first member of parliament infected with the new coronavirus (COVID-19) has appeared!

… On the contrary, haven’t you ever been? !! I was surprised at that.

What about rich contacts?

I told you yesterday in this “summary article” that I always introduce,

About this, it became news today.

The “Number of infected people in the world” that I put out at the top ↑ is updated every second in a timely manner, so before it will be news on NHK (= confirmed per day), I can tell you a little earlier than!

And here is the end

It seems that a town in Gunma Prefecture has issued its own state of emergency!

Oizumi-cho, Ora-gun, Gunma Prefecture seems to be a town with a population of about 40,000, but many Nikkei live there, and it seems that 24 people have been infected from August 1st to September 17th. Therefore, an emergency declaration was issued.

It seems to be until September 30th at the end of this month.

By the way, in Gunma prefecture as a whole, the number of newly infected people was 90 in the week until September 16, of which 70% (!?) Of foreign nationals.

By the way, I calculate that…

When converted in Tokyo, there are about 180 people a day, so that’s a lot …

From tomorrow, we will have four consecutive holidays, and of course everyone should be careful to prevent infection, but be careful not to get infected … it is afraid of the aftereffects …