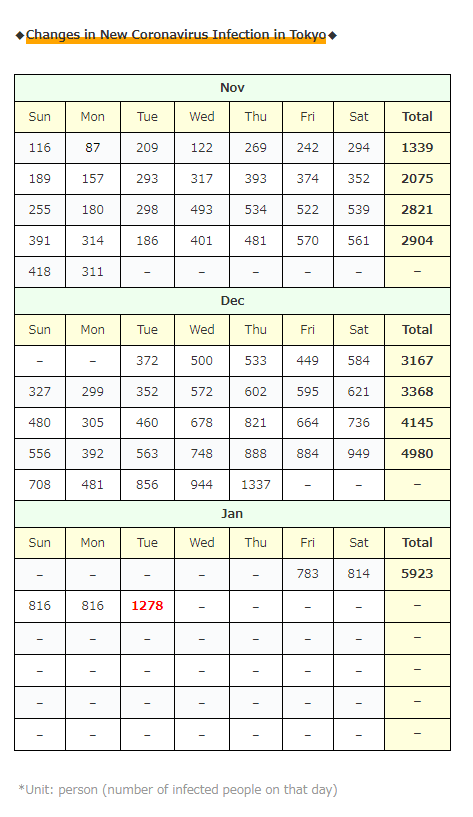 “If it keep going, the number of infected people in Tokyo will exceed 1000 people, so please take strong measures quickly!”

However, in reality, neither the government nor the governor of Tokyo Koike took any measures …

・Infection at a dinner with friends and acquaintances [49] people

・ A case in which a family member was infected after returning to their parents’ home during the New Year holidays without noticing that they were infected.

・ US Army Yokota Air Base

* Bringing in samples from outside of Tokyo [38 cases]

* The detailed number of people has not been clarified, but it seems that new infected people have been confirmed in 4 clusters.

→US military base：[kadena base :3] person(s)

* In Kitakyushu City, 27 people have unknown infection routes, and 14 of the remaining 16 people are via family relatives.

*Among the infected people counted today, there are [8] cluster relationships, including the above.. (Add up to 5 people)

・”Karaoke snack Tsuru”, a restaurant with entertainment at night in Seki city 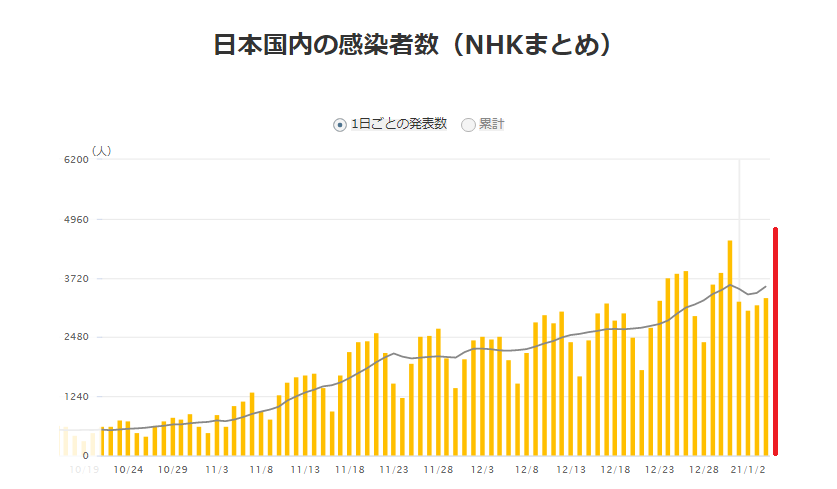 The “state of emergency” has been the center of attention for the past few days, but I’d like to sort it out a bit because various information and thoughts of various people are coming out!

When is the “state of emergency” issued by the government to “1 metropolitan area and 3 prefectures (maybe not only …)”? is that

It’s getting faster and faster on a rumor basis,

Without waiting for the government’s response, the governors of the four regions will say “emergency action” and will make their own request from January 8th!

・Request for shortened time until 8:00 pm to restaurants that serve sake

(* Only alcoholic beverage restaurants until the 11th) 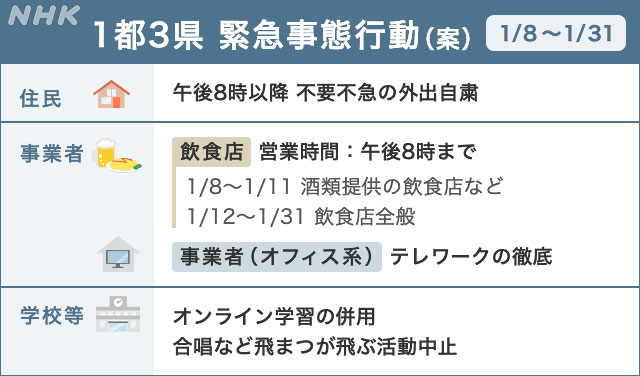 Well, they were able to impose blame onto the government, and this time it seems that the appeal of “We’re doing now what we should do!” has begun…

You had to do it sooner before asking the government for a “state of emergency.”
It’s too late to start doing it now.

Perhaps the government is angry about it,

and the issuance of “emergency declarations” to the four regions seem to be considering issuing from the 7th, earlier than the “emergency actions” that the governors are trying to do independently.

Various things are starting to move due to the speculation of various people, but as a result, anything is fine as long as proper measures are taken and the spread of infection stops! Lol

By the way, it seems that such an “emergency declaration” will be issued …

At department stores, sales of the New Year’s first sale have decreased by 40% to 50% …!

→ Sales decreased by about 50%

2 stores in Tokyo of Isetan Mitsukoshi

→ Sales decreased by about 40%

→ Sales decreased by about 40%

If the number of people is decreasing, it is good for infectious diseases, but on the contrary, it is economically worrisome in this difficult situation…

The problem is that COVID-19 has been prolonged so far …

And about the “state of emergency” in the Greater Tokyo Area

“Currently, we are calling attention to traffic to and from the metropolitan area.”

“I’m afraid that people in the metropolitan area will come to the prefecture to visit restaurants that are open until late.”

“Aichi has a different infection situation from the Greater Tokyo Area”

“Current Aichi is not in the state of emergency declaration”

“If an emergency is declared in the Tokyo metropolitan area, I would like to strongly request that you refrain from coming and going in Osaka.”

“I want to make a strong request if there is a law.”

“The state of emergency should mean that.”

“I think there are people who say that it’s work … but I want them to do it remotely.”

I’m also a metropolitan citizen, but I can only think “That’s right …”! Lol

You should be praised as “they said well!” Rather than “I can’t blame them”.

By the way, “movement of people” is like this…

“Of the 10 infected people on January 2nd in Niigata, 3 are students returning parent’s home from outside the prefecture.”

“Of the 124 infected people on January 2 in Fukuoka, 32 are men and women in their 20s who are returning parent’s home from outside the prefecture.”

“Of the 11 infected people on January 2 in Wakayama, 3 are returning parent’s home from outside the prefecture.”

And as an episode,

“A man from Kanagawa Prefecture who visited the shopping street of JR Atami Station with his family said,” I came on a trip because it’s not good to stay at home all the time, but the state of emergency is not a suspension of “Go To Travel.” It’s different. It’s sad to be unable to go out early in the new year. I think the government’s response is slow. “ 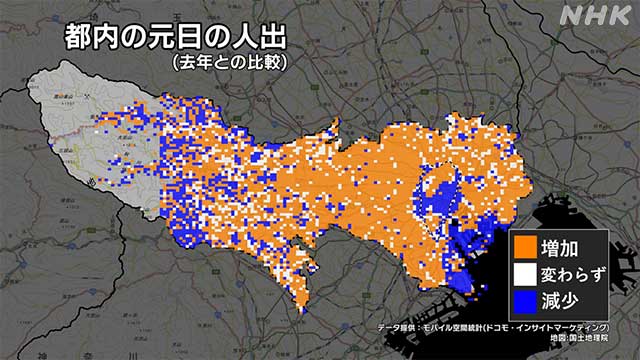 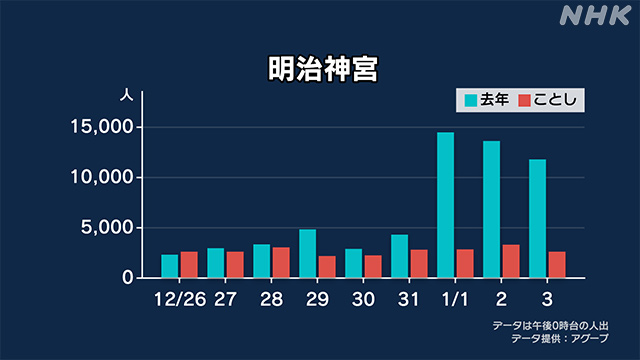 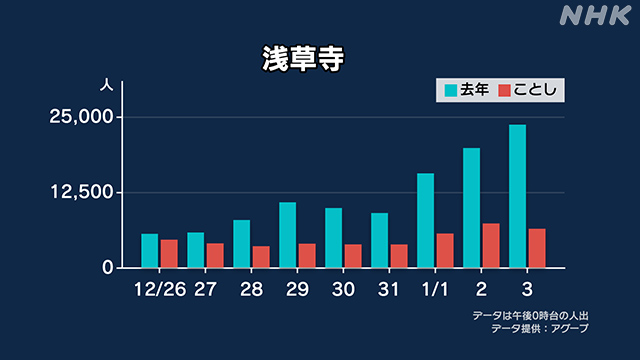 It seems that 50% to 80% of the people at shrines nationwide have decreased!

And moving from Tokyo … 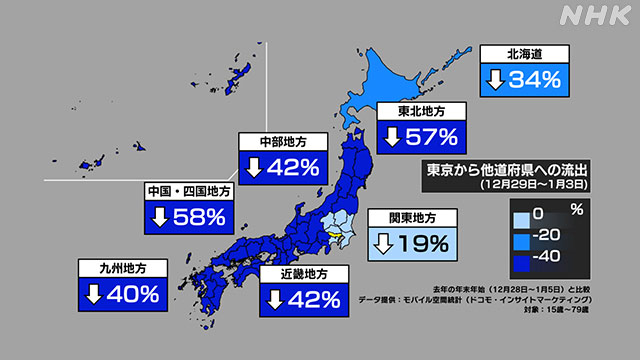 It seems that it has decreased by about 50%. 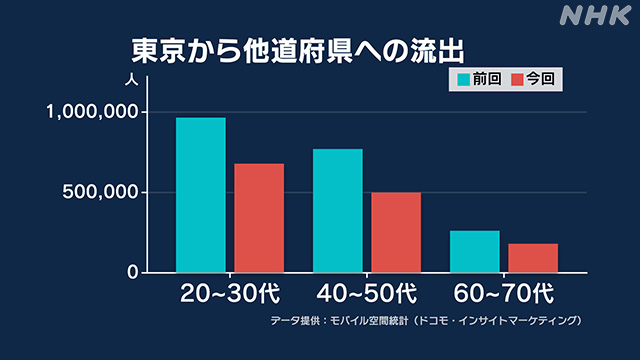 “Young people are playing around without thinking!”

“Don’t spread the infection to the elderly!”

It is said variously like those, but if you look at the data, you can see that all generations are behaving in the same way as usual and the number of people has decreased little by little in all generations.

It’s not like which generation is bad, but it seems to be the same.

… It’s getting a little longer…

It would be nice if the state of emergency would provide government and local governments with compensation only where they really needed it, and that would improve the infection situation!

Until recently, I used to say, “The increase is likely to exceed 1000 people …”, but today the number has increased by nearly 2000 people at once. ..

In the UK, not only Pfizer vaccines but also AstraZeneca vaccines have begun to be vaccinated!

Even in the UK, lockdown has been tightened and the situation is “no going out” and “schools are closed” …

Moreover, it’s all over England!  (Until mid-February)

It seems that the second vaccination has already started in the United States!

It looks like medical professionals and other priority vaccinations, but these people have completed vaccination!

And Japan seems to be adjusting to completely stop the “incentives for business traffic (exemption from quarantine, etc.)” that it is giving to 11 countries!

The following are the immigrants from December 14th to 20th

Since it is a “regulation of new entry”, it does not mean that “traffic with foreign countries is totally prohibited”, so I do not know if it is effective, but also in this half-baked response, it seems that there is a cause that the infection does not stop …!

If you do anything, do it exactly and accurately! Don’t be half-baked! I was taught that way when I was little …, but how about the politicians?