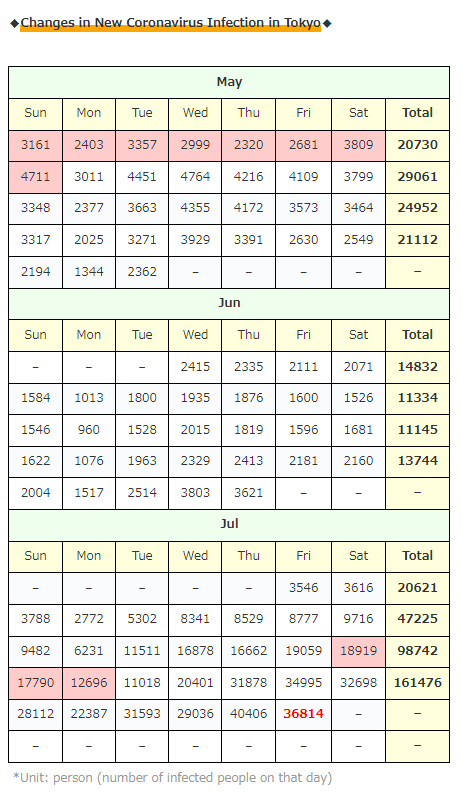 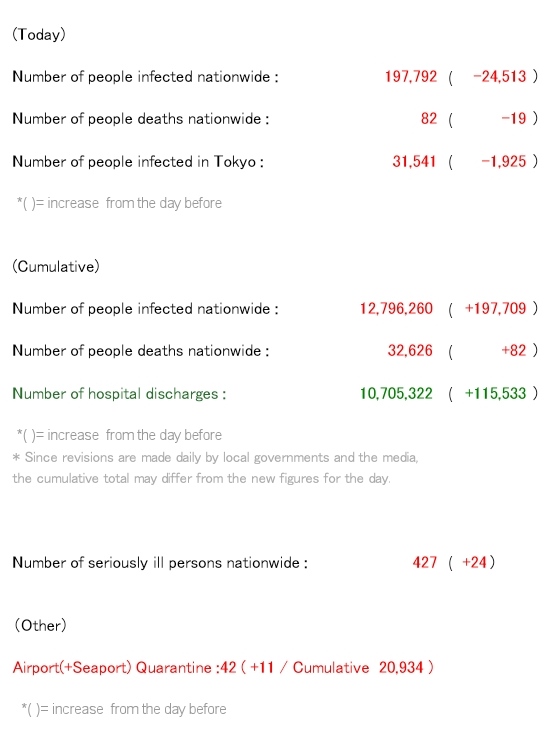 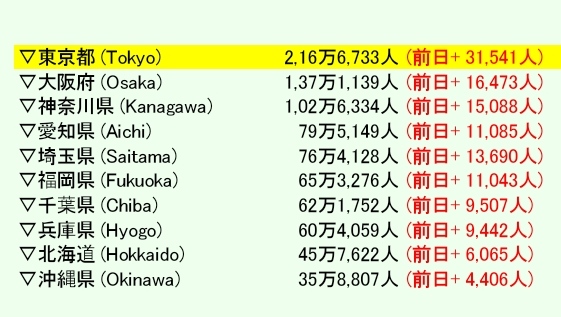 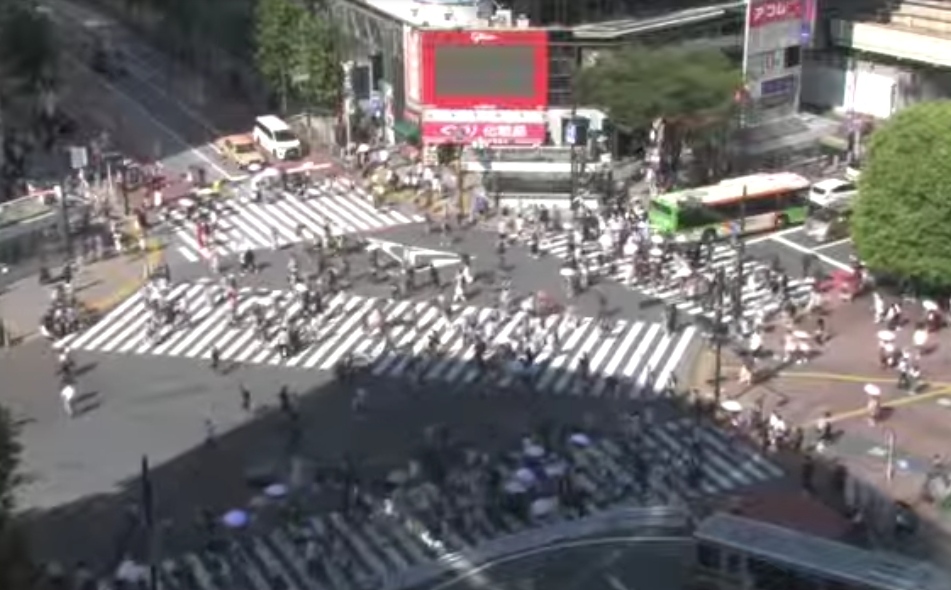 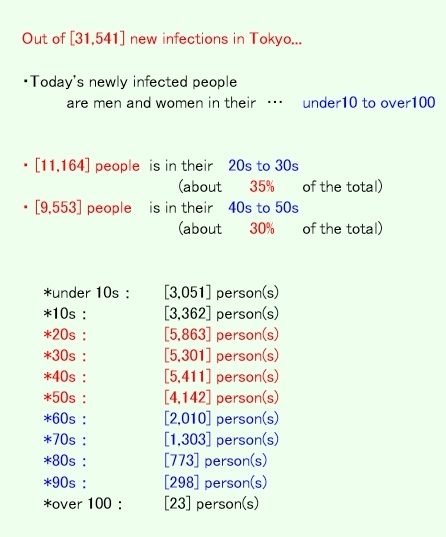 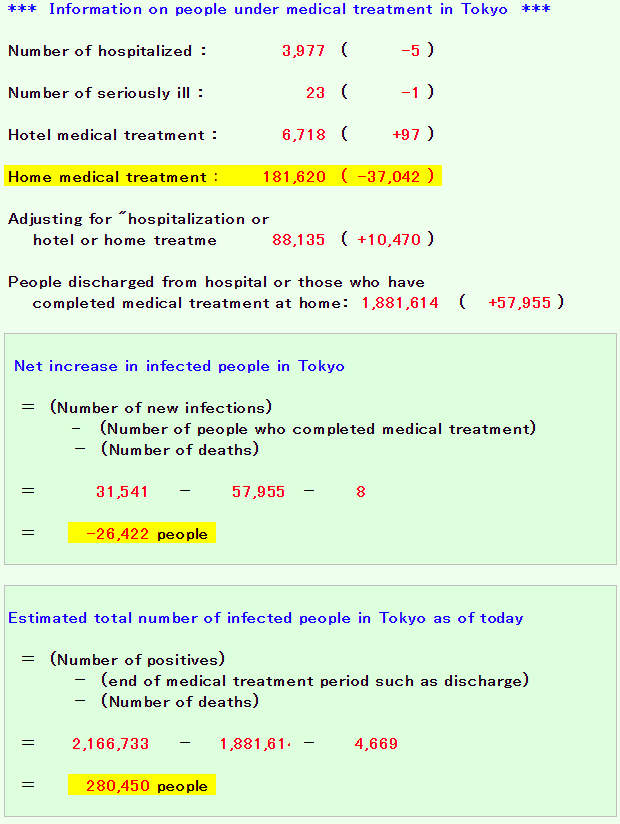 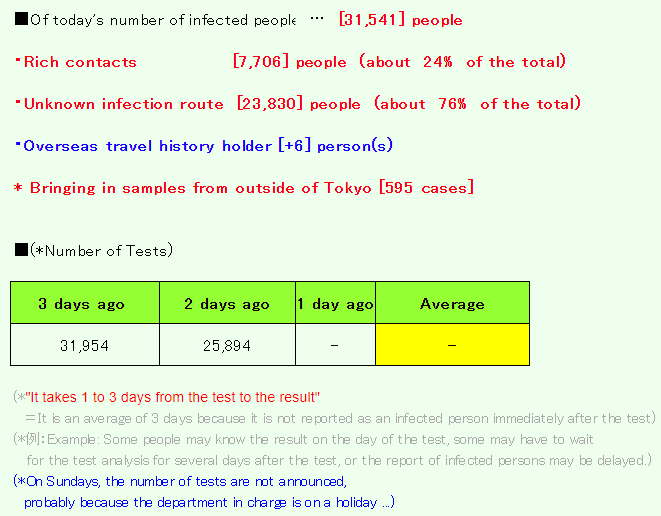 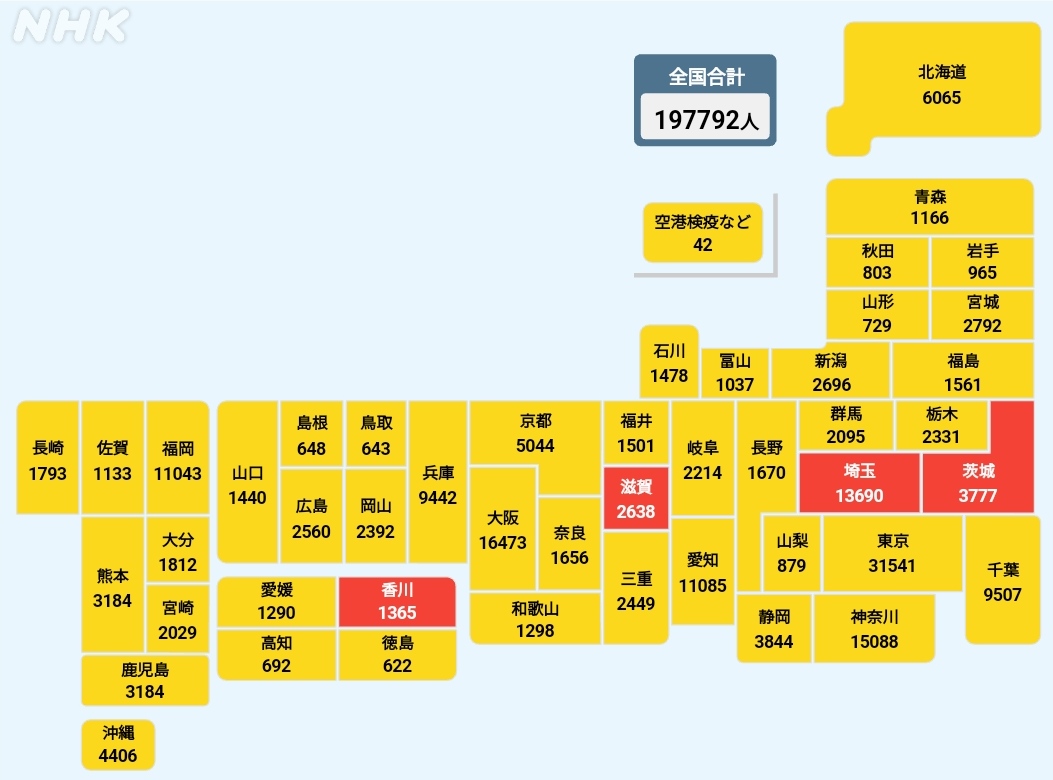 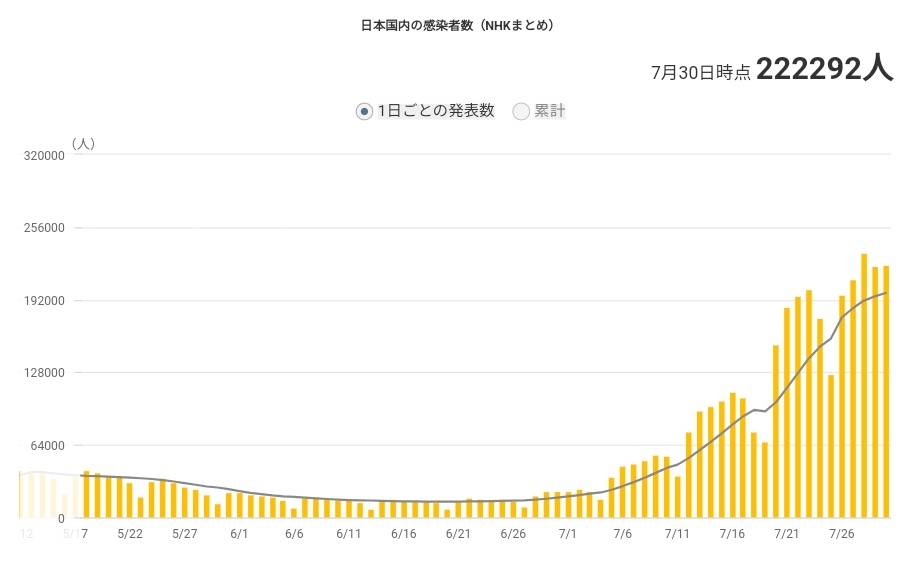 By the way, it is said that the number of people receiving medical treatment at home for COVID-19 has exceeded 1 million for the first time, but

in fact, the number of people receiving medical treatment as a whole is not just 1 million, but close to 2 million. ↓

Well…that’s why there’s a high possibility that you pass each other not only with “People who are unaware of their infection” = “Unconscious infected person”, but also with “Infected person who knows he or she is infected” on the roadside…!

Under such circumstances, Minister of Health, Labor and Welfare Goto, who is the head of Japan’s medical system management, said, “I have no intention of restricting the movement of the people at all, but instead, I will strengthen the medical care system, so don’t worry!”, but…

He seems to be working hard to deliver “COVID-19 antigen test kits” to each municipality.

For what? To strengthen the medical system?

No, it’s so that people who are unwell can do their own tests at home so that they mustn’t go to the hospital.

This is the strengthening of the medical system by the Japanese government!

By the way, there is one characteristic thing about the 7th wave this time.
That is… the number of  “Special suspected disease patient” = “person who was diagnosed as an infected person without being tested” has increased to an incomparable amount…! 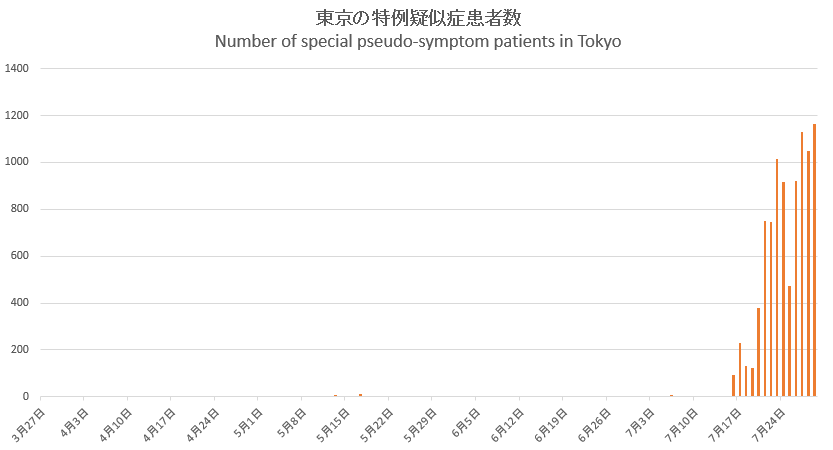 ↑Surprise, right?
Since the three-day holiday in July, when the infection exploded, it has increased dramatically…!

If you think that it will increase in the situation that “hospitals can not afford to examine and test”, it means that medical care is already over the limit, and the test system is already close to the limit.

By the way, the excuse of the government and people who do not want to refrain from action is “It’s a disease that won’t die anyway!”, but recently, the number of deaths has been surpassing triple digits every day. 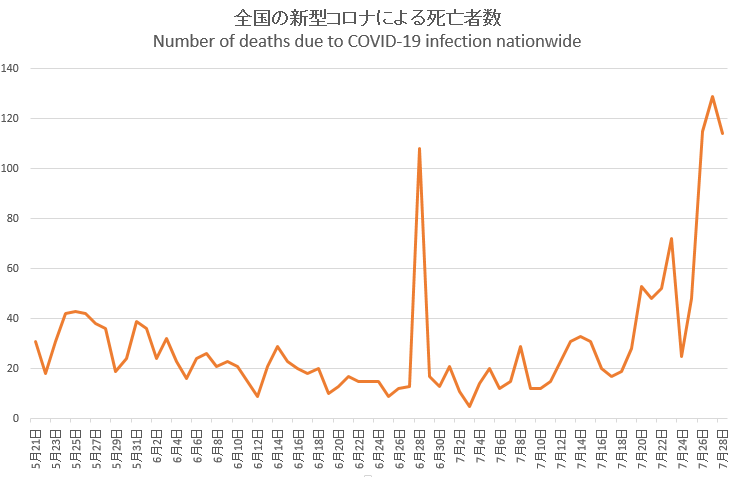 The advisory board (expert meeting) of the Ministry of Health, Labor and Welfare, which is always in the state of “just watching about this”, are just having a casual meeting and saying like this… 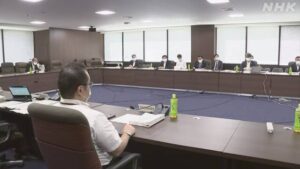 Advisory board of the Ministry of Health, Labor and Welfare (expert meeting)
“From now on, the number of deaths and serious cases may increase, especially among the elderly.”

One of the causes of this big explosion of infections is the result of these people being the first to say, “People should take off their masks!”

By the way, as for the people who die, the age group is going down little by little… 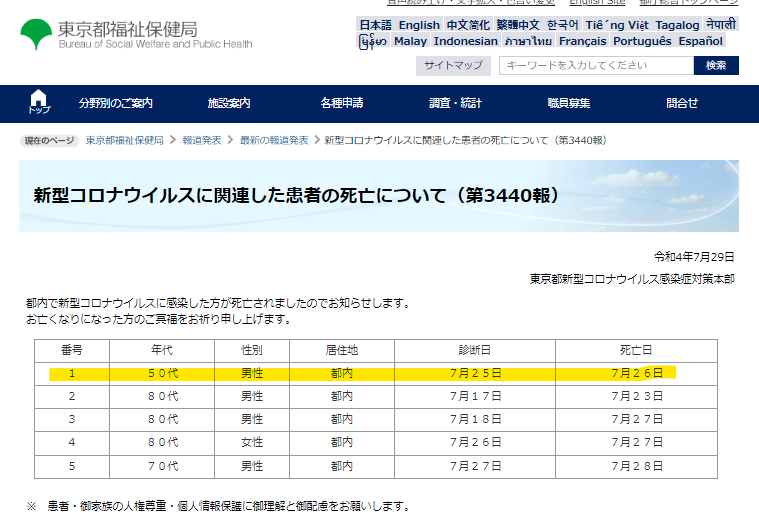 Even in Tokyo, people in their 30s to 50s are dying about once every two days.
And just the other day, there was a death under the age of 20, which was not seen in the 6th wave.

Well, everyone who is cautious about COVID-19 knows that the number of deaths lags behind the number of infected people by one month, but we have actually entered that period.
This is completely a “man-made disaster”, but I wonder if the number of deaths will continue to increase until around the beginning of September as usual… 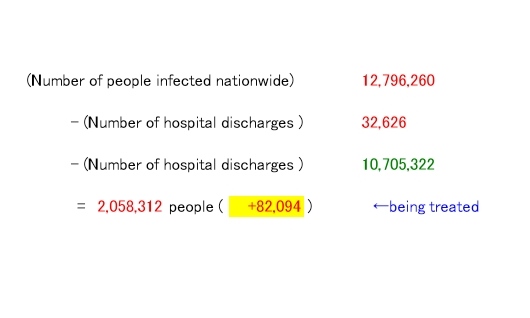 Come to think of it, it seems like “we can’t take it anymore, so Fuji Rock will be held!!!” (dry laugh)

However, it has already started, and although loud voices are prohibited at the venue, the cheering is said to be “more than usual” and “low-key” (dry laugh)

Well… even soccer and baseball attract spectators, so in that sense there is no reason to cancel the event.
However, even if they get infected here, they will develop symptoms after returning home, and as a result, the route of infection will be “unknown”.

Most of the people are not willing to refrain from self-restraint, and the government is not willing to take measures, so it seems that we have no choice but to continue praying that it will naturally decrease!