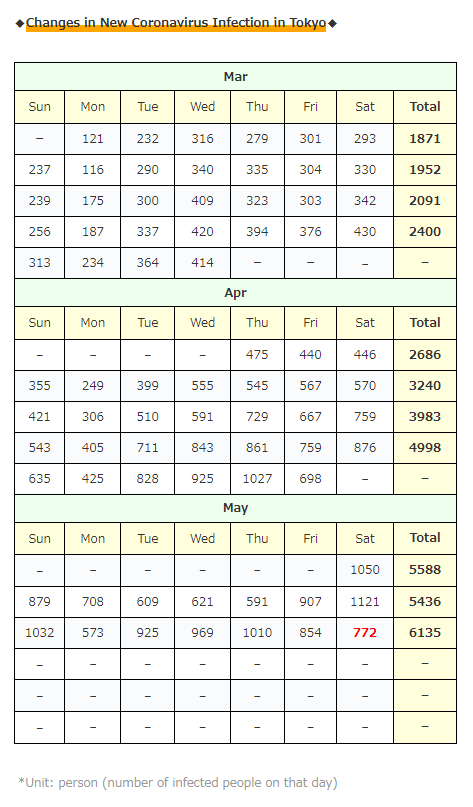 Looking at the number of newly infected people in Tokyo only on Saturday, it looks like that last week was the peak.

I can’t say anything because it’s only decreased once …

And today is Saturday, so I calculated the total number of newly infected people in Tokyo for one week, but … 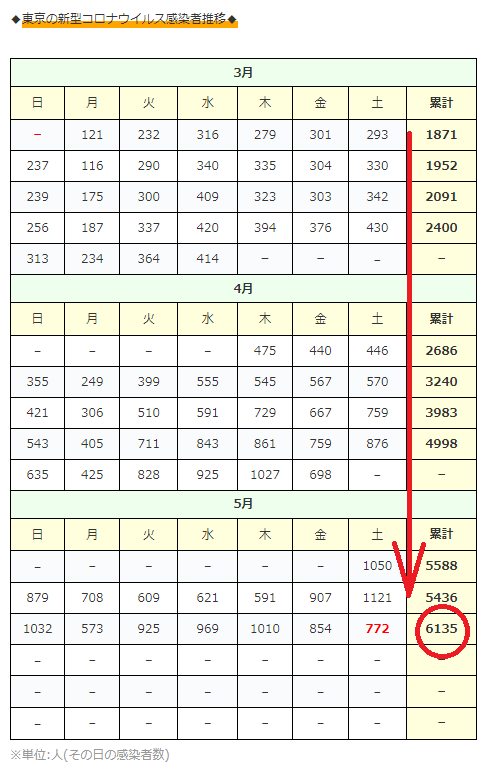 Everyone thought that this week would be “a huge increase due to the influence of Golden Week”, but in the latter half of the week it did not increase so much, so it is easy to think that “What? It exceeded the peak?”
However, if you look at it on a weekly basis, it will continue to increase …

I hope it will decrease next week … 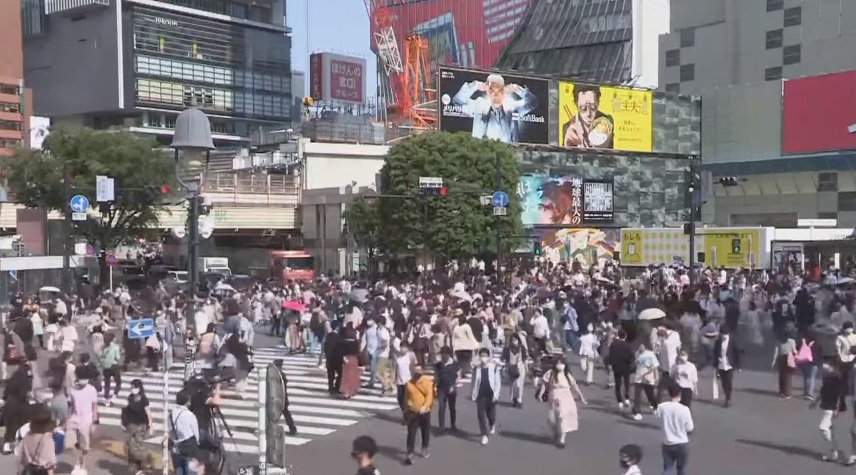 *Details are unknown today, but it is said that clusters are occurring in 10 locations in the prefecture. 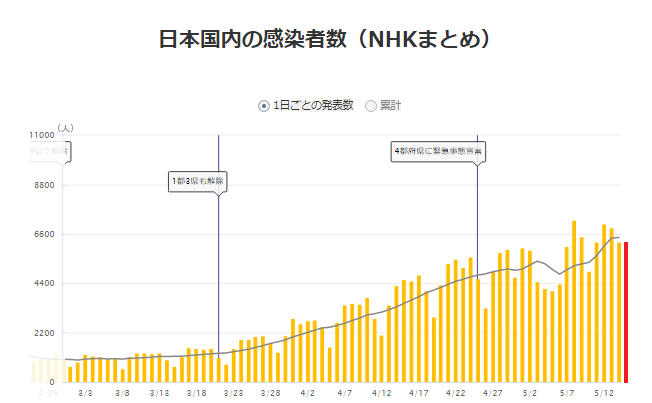 The current infection status of Hokkaido, Okayama, and Hiroshima, which were newly added to the state of emergency yesterday, looks like this … ↓ 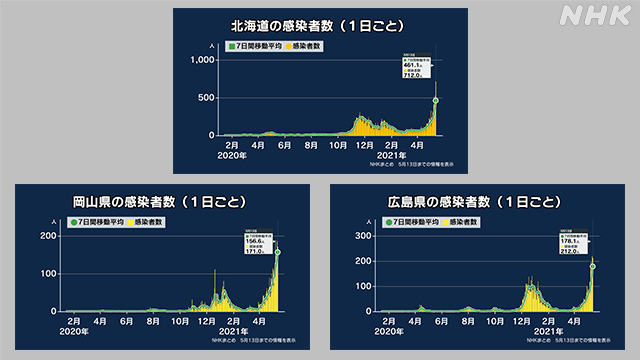 So, yesterday, Hokkaido, Okayama, and Hiroshima were added to the target areas of the state of emergency!

Until the day before that, only priority measures such as prevention of spread to 5 areas were scheduled to be announced, but as a result of various things after 1 day, it became as follows …!

→* Regarding the state of emergency, it seems that Hokkaido has a policy of requesting issuance only in Sapporo City.(As of the morning of the 14th)
(*北海道 鈴木知事 国の緊急事態宣言 措置を札幌限定で求める – NHK)

→* Regarding priority measures such as prevention of spread, it is under consideration to apply to Ishikawa, Gunma, Okayama, Hiroshima and Kumamoto.(As of the morning of the 14th)
(*群馬など５つの県に“まん延防止”適用方針 – Yahoo!)

Contents officially announced on May 14 ↓

As for the circumstances, it seems that the government informed the subcommittee of the policy of applying priority measures such as prevention of spread to the five prefectures of Gunma, Ishikawa, Okayama, Hiroshima and Kumamoto as originally planned, but as the result of the subcommittee meeting, it seems that the opinion that “a state of emergency should be issued” was given because the infection situation in Hokkaido, Okayama, and Hiroshima is becoming difficult.

Specifically, it seems that the following matters were discussed.

①Since many indicators are in stage 4 in those three areas, the measures to be taken are not priority measures but emergency declarations.

② If an emergency declaration is not issued in this situation, the judgments that have been declared will not be consistent.

③It is not a situation where you can wait another week to see the effect of the measures.

In the first place, each governor said as follows, so it seems that the government tried to take priority measures such as prevention of spread.

Looking at the reactions of the people in the city and the internet, most of the opinions were as follows.

However, this change of policy should be praised for listening to the necessary opinions and responding flexibly as needed.

So, rather, I thought, “The government made a good decision even though it would have been criticized for changing its opinions and policies … well done!” …!

It means that it’s not “there are things that can only be done by declaring an emergency rather than priority measures such as prevention of spread.”, but “We made a state of emergency because we wanted to strongly convey that it was a dangerous situation.”

Well … that’s natural …
Because the priority measures and the state of emergency differ only in the amount of fines etc. in terms of the contents of the measures…

* I had a lot of content to tell you today, but since this summary has already become quite long, so (the news will decrease on Saturdays and Sundays,) I would like to tell you after tomorrow …!

Ah, there was such a thing … 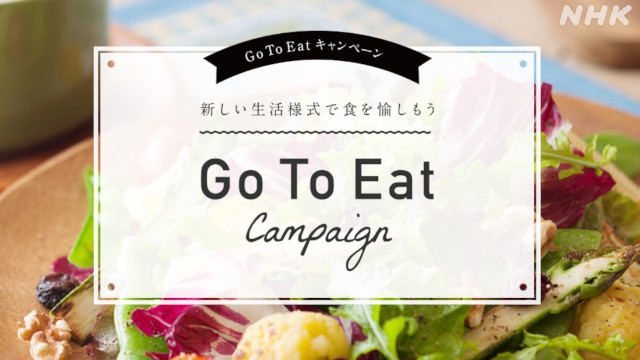 (*Go To Eat : Economic measures that the government subsidizes meals to encourage visitors to restaurants)

It seems that it will be extended until December.

… It’s not such situation right now, so just shut up!

After all it was exactly what I said from the beginning,
“The government should do it after COVID-19 is over …”