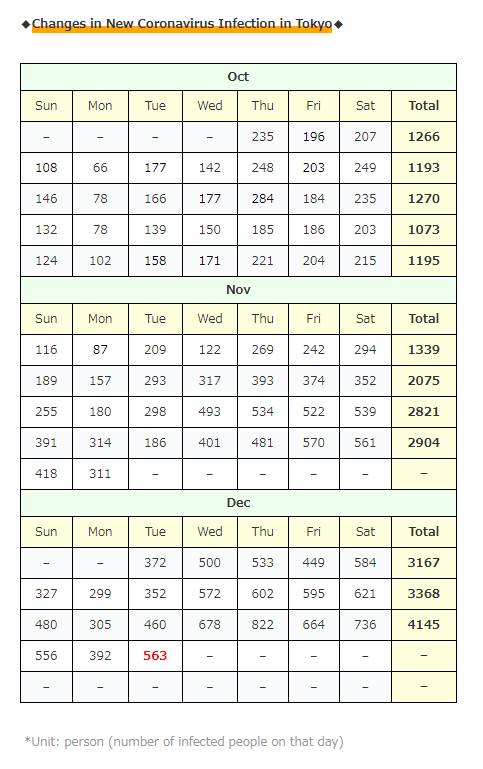 Even though the number of the second wave peak (August) did not reach 500 people, I do not understand anymore …

・Prefectural facilities for persons with disabilities in Atsugi City

・Special nursing home for the elderly in Yokosuka city

*Among the infected people counted today, there are [9] cluster relationships, including the above.. (Add up to 8 people)

・Restaurants with entertainment at night in Ichikawa city

・ Facilities for the disabled in Kitakyushu City

*Among the infected people counted today, there are [5] cluster relationships, including the above.. (Add up to 4 people)

*Among the infected people counted today, there are [3] cluster relationships, including the above. (Add up to 1 people) 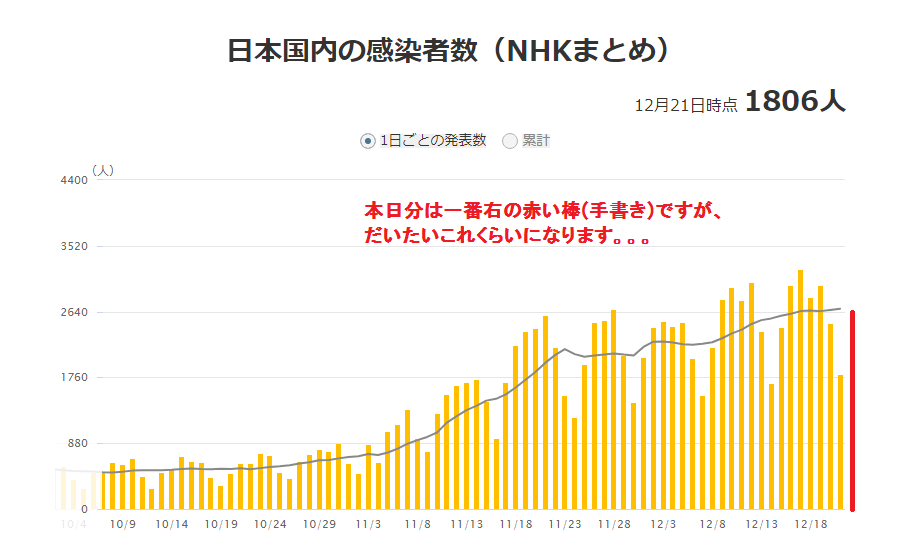 A terrifying word popped out from the governor of Okayama prefecture …!

“Even if infected, it is not always possible to be hospitalized.”

In Okayama Prefecture, the infection has spread all at once since the beginning of this month, and the usage rate of beds for COVID-19 patients is around 50%.

They want more beds but not enough nurses. 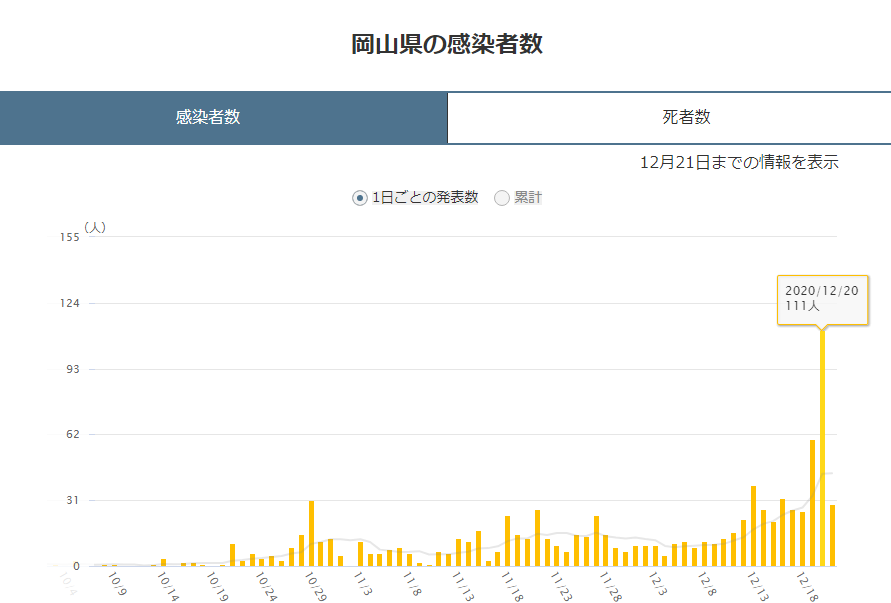 By the way, the population of Okayama prefecture is about 1.9 million.

= One-seventh of Tokyo’s population of about 14 million

When converted to Tokyo

The highest number of infected people ever → 822 people today

Tokyo is worse at all …

The situation in Tokyo is far too bad than in Okayama, but the governor of Okayama has a strong sense of crisis and expresses it to the citizens of the prefecture, and the governor of Tokyo seems to have more time to spare …

This is a drug-related topic for the new coronavirus (COVID-19)!

According to the deliberation by the Ministry of Health, Labor and Welfare,

“the doctor has too much prejudice that Avigan works” …

Why did Remdesivir (WHO judge that it was ineffective) passed the application in 3 days, but Avigan did not pass the application even after more than half a year?Some people have whispered that “Abigan’s company is out of the interests of the Ministry of Health, Labor and Welfare”, but I do not know the truth …

And in the United States, the vaccination of Moderna, the second new corona vaccine, has already begun!

I’m a little envious of it, but I’m very happy that it’s working toward a solution all over the world!

A 44-year-old nurse woman who had lost her father in COVID-19 was vaccinated, and said “as a nurse I have seen many patients fight to live. This vaccine ends the pandemic. I hope you can do it. You should be afraid of the new coronavirus (COVID-19), and you should not be afraid of vaccination. “

And it seems that the EU (= European Union) has finally obtained permission to use Pfizer!

It seems that the inoculation will start on the 27th, about a week later!

In the United States, more than 270,000 people have completed the first vaccination, but 6 people have allergic symptoms of “anaphylaxis”.

I want the causes and countermeasures to be researched as soon as possible, but 6 out of 270,000 people … Is this more or less …

“I want to spread the request for shortening business hours nationwide”

I think that method failed in “the important three weeks that the government positioned” …?

And it seems that the government subcommittee was held yesterday, but Dr. Omi said, “Although the infection route is unknown, about 60% of the total, many people think that it is an infection in a restaurant.” !!

In this “Summary Article”, I also summarize the “Number of people infected at dinner in Tokyo” every day in ↑, but I always thought that it was abnormally small …

(Even on days when there are 700 to 800 infected people, only 20 people are infected with dinner)

With that in mind, I’m sure Mr. Omi’s statement is quite convincing …

And Minister Nishimura was pointed out by experts that “the message has not reached the younger generation such as those in their twenties.”

I think it’s quite difficult for the younger generation to “refrain from themselves”, and that it hasn’t been communicated since April …

In the situation where the infection has spread so far, I feel that “request for self-restraint” is useless …!

The current correspondence of each country has been summarized, so I will post it!

■ India
All flights from the UK will be suspended from midnight to 31st on the 22nd. Inspections are also conducted for passengers on connecting flights.

■ Hong Kong
From midnight on the 22nd, flights from the UK are prohibited. It will also extend the quarantine period for travelers arriving from the UK in the last two weeks. (* Immigrants are obliged to quarantine themselves for 14 days.)

■ France
Travel from the UK is prohibited for 48 hours from midnight on the 21st. This includes everyone involved in freight transportation on “land, sea, air and rail”.

■ Germany
From midnight to 31st on the 21st, flights to and from the UK are temporarily prohibited. Considering extension of ban period.

■ Netherlands
Passenger flights from the UK to the Netherlands will be prohibited until January 1st next year. * One mutant infection already confirmed.

■ Ireland
For at least 48 hours from midnight on the 21st, flights from the UK were banned.

■ Italy
No flights from the UK, and no one who has stayed in the UK for the past 14 days to enter Italy. * One mutant infection was confirmed from a returnee from the United Kingdom.

Meanwhile, Japan … I posted it yesterday as well.

Japan’s Ministry of Foreign Affairs says, “The situation is different from that in the EU, where you can move freely,” and it seems that they are not willing to take any measures, let alone travel restrictions …

It may be too late …

I hope it doesn’t mean that the number of infected people will increase dramatically from here …!

At Meiji Jingu in Tokyo, the annual night of December 31st to the beginning of the morning of January 1st will be canceled …!

It seems that the restaurants and food stalls on the premises will be canceled until January 4th.

I don’t go to New Year’s worship every year, but I really like the train, where there are few people during the New Year holidays, so I’m a little nervous when I think it might be crowded on New Year’s morning … lol